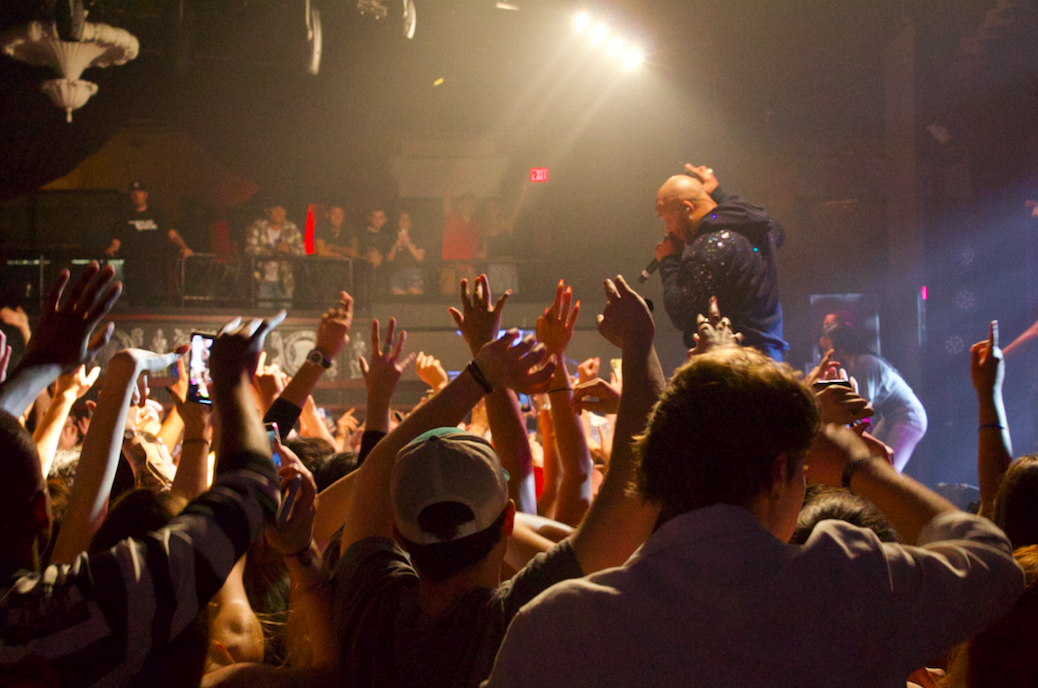 Flo Rida took the stage at Suffolk’s spring concert on April 6 at the Royale. (Will Woodring)

Flo Rida took the stage at Suffolk’s spring concert on April 6 at the Royale.

To quote a t-shirt at the merch booth, “I partied with Flo Rida.”

Boston’s Royale was electric from the moment Flo Rida took the stage at Suffolk’s spring concert on April 6 to the moment he left. Organized by the Student Government Association and staffed by members of Suffolk’s Program Council, the show was the first high-profile concert held at the university since fall 2019.

Flo’s performance was a nostalgic nod to most of the crowd’s childhood, with hits like “Low” and “Right Round” once dominating many Suffolk students’ elementary and middle school dances. Yet his up-close interactions and non-stop energy felt undeniably fresh from the 42-year-old singer.

The first chords of the 2012 hit “Good Feeling” erupted from the room as Flo sauntered out on stage with rapper Int’l Nephew and two dazzling backup dancers. That good feeling buzzed through the roaring crowd as Flo sang, his jewel-studded sweatshirt reflecting his hyped-up energy with each time he jumped and swayed.

The song wrapped with a personal welcome to Suffolk students from Flo, along with a compliment to the crowd.

“There’s only one thing that happens when I see so many good looking people in one place,” he said, pointing to the DJ to play “Right Round.”

Even if students’ heads weren’t spinning, the room certainly was. It was impossible to stay still among the wave of jerking arms and jumping bodies — especially when students were diving to catch the sweat towels Flo kept throwing into the audience.

Flo also tossed red roses to girls in the crowd during “Where Them Girls At,” a 2011 David Guetta track that Flo originally sang on with Nicki Minaj. He even brought about 20 female students up on stage with him while he sang his 2008 breakout hit “Low.”

Full disclosure: the author of this article was one of them thanks to the prompting of Journal coworkers. Seeing that I’m 4 ’11, a shorty did in fact get low on stage.

The ladies (and me) stayed on stage for “Move, Shake, Drop,” then went back to the floor for Flo to introduce rapper Oya Baby. The house was bumping as she spit rhymes almost unintelligibly fast, and it was a fun interlude from Flo’s more recognizable hits.

“Club Can’t Handle Me” came next. It wouldn’t be far-fetched to say the club literally couldn’t handle it when Flo hopped on his security guard’s shoulders, who stood in front of the stage, to soar above the crowd as he sang.

The guys got a turn to join him on stage one piggy-back ride and several towel tosses into the crowd later. Nearly 20 students danced with Flo as he bumped to the 2015 bop “GDFR,” with most of the house grinding along with him.

Things got even wilder after that. Flo chose three girls from the audience to sing along with him to “Wild Ones,” using their turn on the mic as an opportunity to get another shoulder ride through the crowd.

Freshman Gabryella Rodrigues was one of the students who sang on stage during the song. She said the experience was surreal and “definitely a core memory.”

“I grew up listening to his songs on the radio and at every party I had been to, so never would I have thought that I’d get the chance to sing with him on stage,” Rodrigues said. “It was just absolutely fun and ecstatic to be singing and dancing with him and the others up on stage.”

Flo started his next song, “My House,” while standing on the counter of the bar in the back of the room. He took students’ phones to snap selfies of him singing and high fived extended hands in the crowd once he was moving back toward the stage, still sky-high on a set of shoulders.

The performance was stellar. Not only did Flo give new life to the hits he’s known for, he also made sure to remind the crowd of why they were there in the first place.

“When I say ‘I love’ you say ‘Suffolk!’” Flo chanted toward the end of the show, the crowd echoing him back.

But the energy didn’t start with Flo. Suffolk junior and Journal staff writer Ricardo Orphanos, also known as DJ Ricardo Geldres, opened the concert with an amped-up set of EDM music that he remixed himself.

Orphanos mixed the sounds of well-known hits like Owl City’s “Good Time” with more obscure songs. Regardless of how well-known the tracks were, each beat kept the crowd hopping on their feet with help from Orphanos’ energetic stage presence.

“The way the crowd responded was extraordinary,” Orphanos said. “The crowd was unbelievable. I have no words to describe the experience, however, I am extremely happy I had the chance to share the type of music I enjoy.

“Thank you Suffolk for trusting me and I hope I can help again in future events,” he continued.