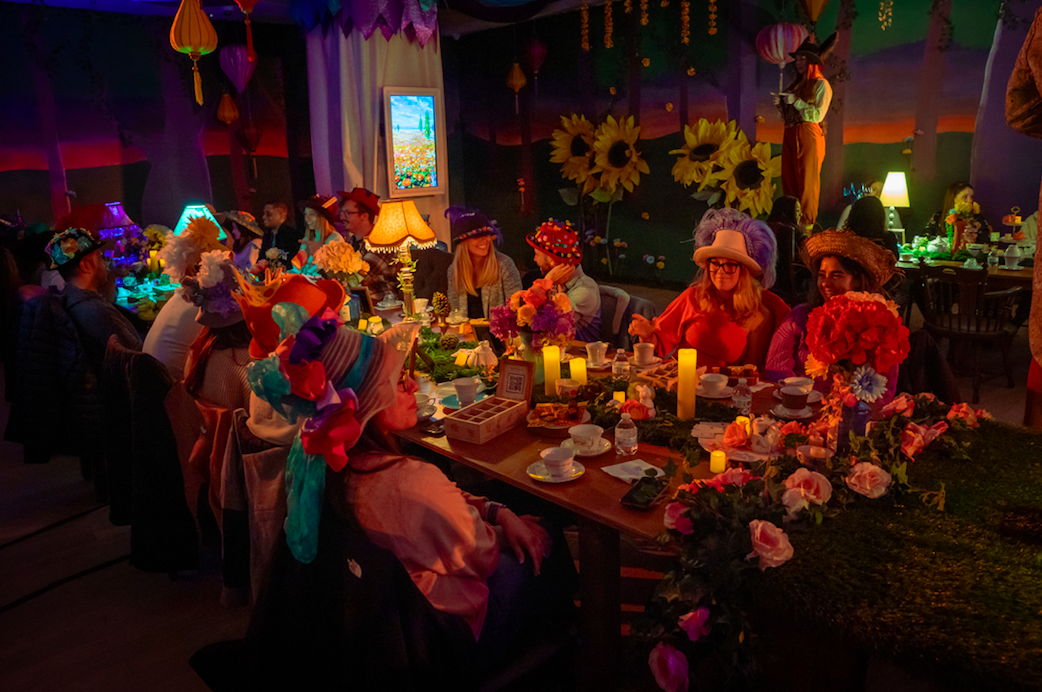 Immersive events have skyrocketed in popularity over the last few years, with everything from the selfie-center Happy Place to the Van Gogh Immersive Experience giving visitors the chance to dive into a world that is far different than their own.

In an ever-evolving world of exhibits, it’s increasingly difficult to come up with one that will stand out from the crowd, but the Mad Hatter’s Gin & Tea Party does just that.

The tea party banks on exactly the right niche and as you enter the event, located in the CambridgeSide Galleria mall, you’re immediately drawn into the experience. From the usher checking tickets at the door while dressed in an ensemble of frills, to the wall filled with Mad Hatter-approved hats, I immediately felt like I was entering a wonderland.

After picking out a tea party appropriate hat to wear, you and your party step into the room of mirrors, allotting you an opportunity to take an Insta-worthy snap. Once they’re finished grabbing photos or checking their reflection, patrons push the mirror in and are greeted by the March Hare. The lovely lady offers you a small vial of lemonade-esqe liquid with cute little tags saying “drink me” attached to help tea party goers “shrink” so they can enter the rabbit hole.

Attendees then enter a long hallway full of decorations that make them feel like they really are Alice while she takes her fall down the rabbit hole, the end being where you enter the room where the tea party is held. With rose petals hanging from the ceiling and walls covered in lights, the large room really transforms into the tea party of Alice’s dreams.

After one of the waiters, who is decked out in the same costume as the usher, shows you and your party to a seat, each party is given three unique cups for your “tea” and a little tea tier stand with all the goodies you’ll need for the event.

Though the prepacked biscottis and crepes given as snacks on each stand were nothing special, if that’s the only area of the event that really lacked, I’ll gladly take it compared to the decor, performance and, most of all, the drinks.

After a few minutes of waiting for all the attendees to finish arriving, the lights dim, the music winds down and the Mad Hatter makes her entrance. The performance had an all-woman trio for the show, and they were hilarious and entertaining.

One of the most enjoyable features of the event were the interactive drinks. Though the waiters did come around to pour the cocktails (or mocktails if you chose the alcohol-free version) from beautiful large teapots, the first two drinks had an interactive component for guests to participate in. The first drink had a deliciously tangy twist and attendees were given a diffuser filled with hibiscus tea to mix into the cocktail.

As for the second cocktail, poured in a clear glass so we can see its beautiful blue color, guests were given flower petals to garnish. The second drink was very smooth and had the scent reminiscent of a Jolly Rancher.

Though the third drink was supposed to have an interactive component, the team had technical difficulties so the smoky, crystal ball look of the drink was lacking. Albeit, the drink was still tasty with a citrus punch and a hint of licorice. The cocktail aspect of the tea party was just the right amount of interactive fun without it being overkill.

I frequently found myself laughing at the performer’s jokes. I particularly enjoyed their mix of modern-day jokes with the wonderland dialogue so their guests weren’t completely stuck in Carroll’s 1865 world. My personal favorite was their joke about the event taking place in an abandoned H&M store, as well as their Tinder and online dating references.

The performers also called on audience members to make guests really feel involved, and every actress did an excellent job at staying in character and putting on a fun and enjoyable show, all while giving guests friendly in-character reminders of drinking responsibly and being respectful.

Though I was unsure of what to expect when attending this event, I was pleasantly surprised by how performance-centric it was. It was the perfect mix of a wonderland theme, crude language and hilarious quips.

The Mad Hatter’s Gin and Tea Party was one of the most entertaining events I’ve attended in a long time, and it was a fun way to spend a Sunday afternoon. If you like gin and you’re even the slightest “Alice in Wonderland” fan, this event is worth the money.

Tickets for the event can be purchased on Fever’s website and the traveling exhibit is in Boston until the end of May.