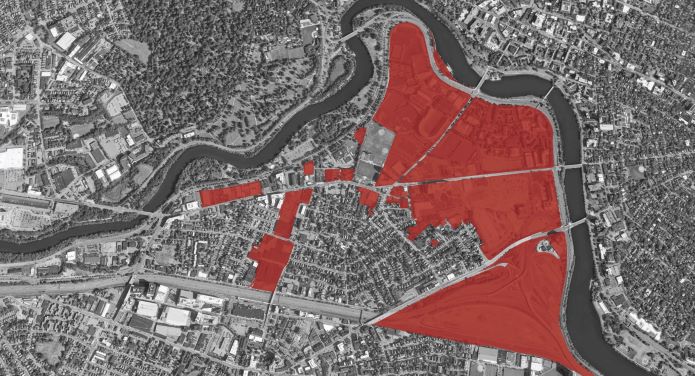 Map of Harvard-owned plots in Allston. Image courtesy of CJAB

Map of Harvard-owned plots in Allston. Image courtesy of CJAB

How do you take on one of the most famous and prestigious institutions in the world? This is the question that a group of activists in Allston and Brighton are working to answer.

Harvard University owns one third of the Boston neighborhood of Allston, making it the largest landholder in Allston and Brighton according to the activist group, the Coalition for a Just Allston Brighton.

The organization, which goes by CJAB for short, is working to hold Harvard accountable for the land they own and to keep the two neighborhoods affordable and welcoming of all. The group said they want to form a partnership with Harvard that is mutually beneficial.

“We want a productive partnership with Harvard. While the university repeatedly has stated its desire to forge this kind of partnership, it has not taken steps to realize this desire,” said Tony D’Isidoro of the CJAB and the Allston Civic Association. “We have an unprecedented opportunity to create a well-designed urban community. We can’t squander this opportunity with yet another urban planning fiasco like the Seaport.”

Kevin Carragee, a professor in Suffolk’s department of communications, journalism and media, is a proud resident of the area and an organizer for CJAB. With housing prices around the city on the rise, he and other neighbors decided to take action by organizing with CJAB.

Suffolk students really have no input or connection to Harvard, but are facing these issues.”

“There is an absolute severe housing crisis in the city at large. Boston is in danger of becoming a city largely for the wealthy,” he said.

Carragee clarified that CJAB doesn’t solely place the blame of the housing crisis on Harvard University.

“We’re not saying Harvard alone is responsible, multiple factors are at play,” he said. “Harvard plays a role, especially in these neighborhoods. And different universities play different roles in different neighborhoods.

Carragee said the rise in housing prices and gentrification of the neighborhood threatens all who want to live in the city, including Suffolk students, faculty and staff.

“There are a lot of people from Suffolk, who really enjoyed living in the neighborhoods of Allston and Brighton and want to continue living there. And this is definitely an issue that affects them,” Carragee said. “Suffolk students really have no input or connection to Harvard, but are facing these issues.”

CJAB outlined their vision for the future of Allston-Brighton in a 19-page letter the organization sent to Mayor Michelle Wu. In summary, the organization asked for a commitment from both Harvard and the City of Boston to ensure that all future developments be conscientious of the neighborhood’s goals in the areas of:

The letter had 23 signatures listed online at the time of this report’s publication, including two state representatives, two state senators, five city councilors and a number of high-ranking administrators both in City Hall and at Harvard. The full letter can be read here.

Specifically, the group is taking aim at Harvard’s proposed Enterprise Research Center, which would occupy 36 acres in Allston and Brighton. A press release from CJAB explained that many of Harvard’s projects have lacked neighborhood input and were shrouded by secrecy; however Harvard has made a significant profit from past projects.

The Journal asked Harvard if this was true and how much of a profit they had made from past projects in the neighborhood via an email to their department of public affairs. As of the publishing of this article, Harvard has not responded to the information request.

While Harvard did not respond to The Suffolk Journal’s media inquiry, their community website maintains that the university works with partners across the communities it impacts to “demonstrate what it means to be a good neighbor.”