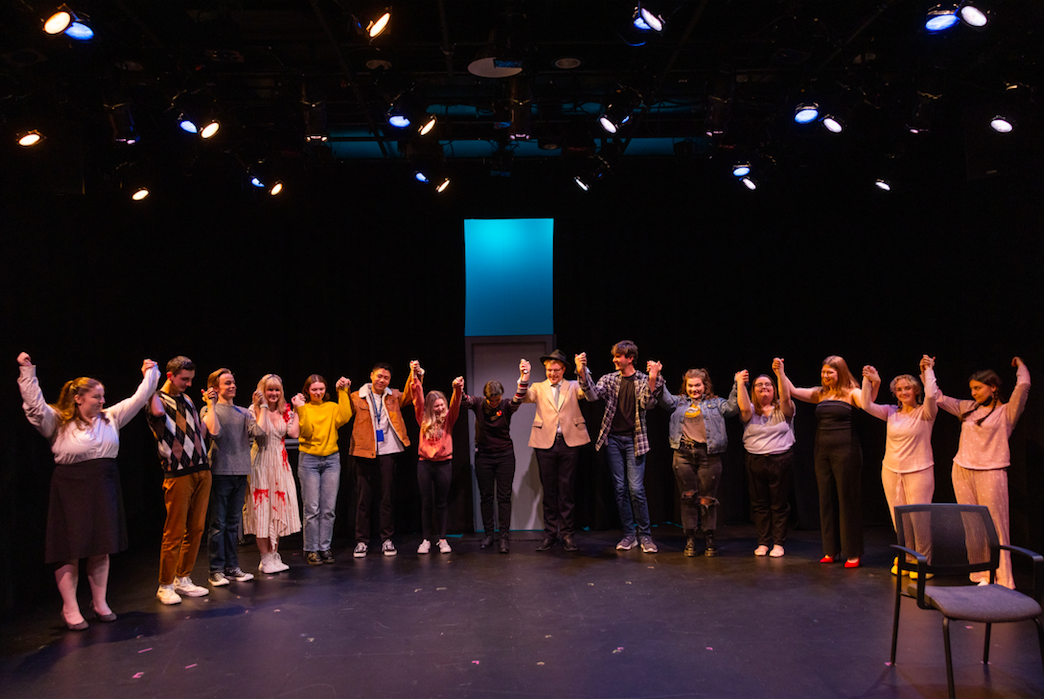 The cast of students who participated in the Fall 2021 Showcase. (Nile Scott Studios)

The cast of students who participated in the Fall 2021 Showcase.

Set in Sawyer’s 11th-floor theater, the state of the art “black box” hosts a large stage with limited seating that gives the audience a direct and intimate feeling while watching performances.

The first show to take the stage during the Nov. 18-21 run was “Stella,” written and directed by Amia S. Rodríguez Josoy. As the lights went down to all but pitch-black darkness, the cast members set the stage. The audience is submerged in the stillness of the dark for a moment before the lights come up to the scene before them.

As the opening scene begins, the audience gets glimpses into the middle of a story. The timeline is disorienting, but in a creative way that highlights the narrative of the show.

As Will, played by Jacob Shindler, plays video games with a friend, he speaks to Stella, played by Hannah Kupson, while his brother tells him to stop talking to himself. This is the audience’s first clue that something is off.

Soon after, the cast rearranges the stage again, turning it into a funeral scene. As Stella lays in her makeshift coffin, the mystery deepens. Will gives a speech about their love for one another, only to have Stella sit up from her coffin and move on to a new scene.

As the story jumps timelines, the audience begins to get puzzle pieces that lead to the larger picture. Will fabricated Stella’s love for him and when she rejected him, he pushed her into the road, where she was hit by a car, bleeding to death in Will’s arms.

The performance ends with a scream, as the ghost of Stella watches Will lie about what happened in her final moments.

The next play, “Red Light, Green Light,” written by Olivia McDonnell and directed by Emma Hudd, was set in a child’s bedroom. Lizzie, played by Jackie MacAvery, is the room’s owner, playing alone in bed.

From behind a bookshelf comes a second person, who seems to be a figment of Lizzie’s imagination. The friend she made up to chase away the loneliness, Gabby, played by Olivia Festa, was the darker part of Lizzie’s mind.

From offstage, we hear a disembodied voice yelling at Lizzie to be quiet. When Lizzie’s mother comes into the room, she is filled with vitriol. She threatens Lizzie and tells her that she cannot come out until a red light on her dresser turns green and threatens to add more time to the clock.

Eventually, Lizzie becomes a teenager and is still stuck in the room. The change of vocabulary and manner of speaking between Lizzie and Gabby lets the audience feel the change without physically seeing it, as Lizzie has been locked in the room for over 10 years.

As the two argue about their situation, Gabby leaves Lizzie for the last time. With her one companion gone, Lizzie snaps. She marches out of the door after saying she has to kill her mother and the audience hears a scream offstage. Lizzie happily returns to her room, as the red light finally changes to green.

The final performance was written and produced by Allison Hanna. “The Thin Places,” also begins in a bedroom, this time one of a teenage girl. Danny, played by Madison Ashworth and her brother Jacob, played by Kieran Khanna, are together watching old episodes of “The Twilight Zone.”

The two end the night talking about “thin places” that are akin to the Twilight Zone, if it was possible for them to search them out and what would happen if they did.

The next morning, their mother comes to wake Danny up, one of the funniest moments of the night. The banter between the actors is uplifting and playful.

As the narrative moves forward, Danny and Jacob decide to go to the movie theater and watch separate movies. As the audience travels with Danny, the all too familiar AMC theater ad plays over the speakers, allowing the audience to feel as if they are with Danny.

Danny falls asleep and wakes up alone in the movie theater. Her brother is gone, the cashier is gone and she is alone. Then, as she begins to panic, The Driver, played by Collin Smith, shows up.

He explains to Danny that the thin place heard her call and that she was no longer in her own universe. He takes her on a tour of the thin place and gives a history lesson of sorts about time traveling.

This play in particular allowed the audience to feel the desperate loneliness of Danny, as she lost her brother and mother when she went into the thin place. It is a reminder of the past year and a half of isolation felt around the world due to the COVID-19 pandemic.

Though Danny eventually makes her way back to her own timeline, the audience is left wondering if they will ever be able to return to a world that seems “normal” to them.

The Fall Showcase brought a flurry of talent to the stage and behind the scenes. The writers and directors of the plays stood out, while the actors carried their directions and made their work come to life.