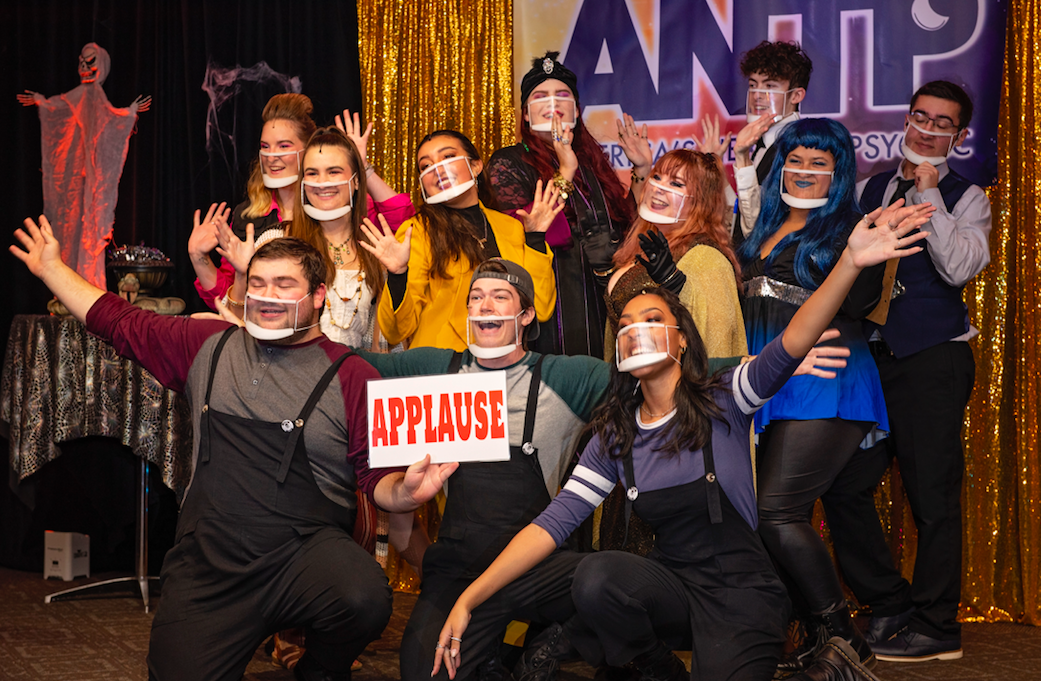 The cast of PAO’s “America’s Next Top Murder.”

Crowds were buzzing with excitement at the Performing Arts Office’s three-night dinner theatre, “America’s Next Top Murder,” which kicked off just in time for Halloween.

From Oct. 28-30, the cast and crew of the dinner theatre put on a show about a humorous psychic competition in which a member was murdered. From the musical to improvisation, both the cast and the audiences got to have interactive fun while solving who was the killer using the clues provided.

The beginning of the show was exciting. The plot that the audiences were introduced to progressed quite nicely and it felt like a production of Saturday Night Live with all of its musical numbers.

“The show was interesting and something fresh because it brought tropes from old theater and made it interactive with the audience in the dinner theater,” said Aqil K. Legopranowo, a freshman who attended the show.

The characters were created with quality in mind. The cast made each audience member laugh while being consistent with their character’s personality.

The top character that practically carried the show was Simone Stonebridge, played by Kassidy Planas. Stonebridge was a moderator of the fictional show, “America’s Next Top Psychic.” She had the energy that was equivalent to Maya Rudolph, to say the least.

Other characters that were an integral part of the show included Vanessa St. John, played by Erin  Zagzoug, Alexa, played by Conor Horgan and Trixie LaPoof, played by Carson Stiles. St. John’s typical celebrity diva personality held up well throughout the show. Trixie, a makeup artist who wants to be a star, was a natural underdog of the show and Alexa, a French detective, was entirely committed to the art of being a detective and being French, especially on an undercover mission.

The crowd was also introduced to characters like Madame O, played by Matt Killion and Magic 8, played by Chloe Payton-Zindle.

“Everything that comes out of Madam O is funny,” said Jasmine, an audience member and a junior at Suffolk.

Magic 8’s prophecy, and her moves, were outrageously hilarious. The show was very unique because they picked some of the audience members and turned them into characters, which was a constant surprise.

The second half of the show dragged a little bit. However, musical numbers created by Annaliese Arnsten and Tim Maurice were nothing short of perfection. They both made the show entertaining.

The endings were spectacular and the mystery kept the audience on their toes. Even though hints to the murderer were given throughout the show with multiple opportunities to guess, it was still an utterly surprising moment when the final reveal came. Prizes for best costumes of the audience members and their predictions of the murderer were a nice touch.

The show was enjoyable and quite pleasant for Halloween weekend thanks to all of the work by the cast, crew, PAO and the tech members.