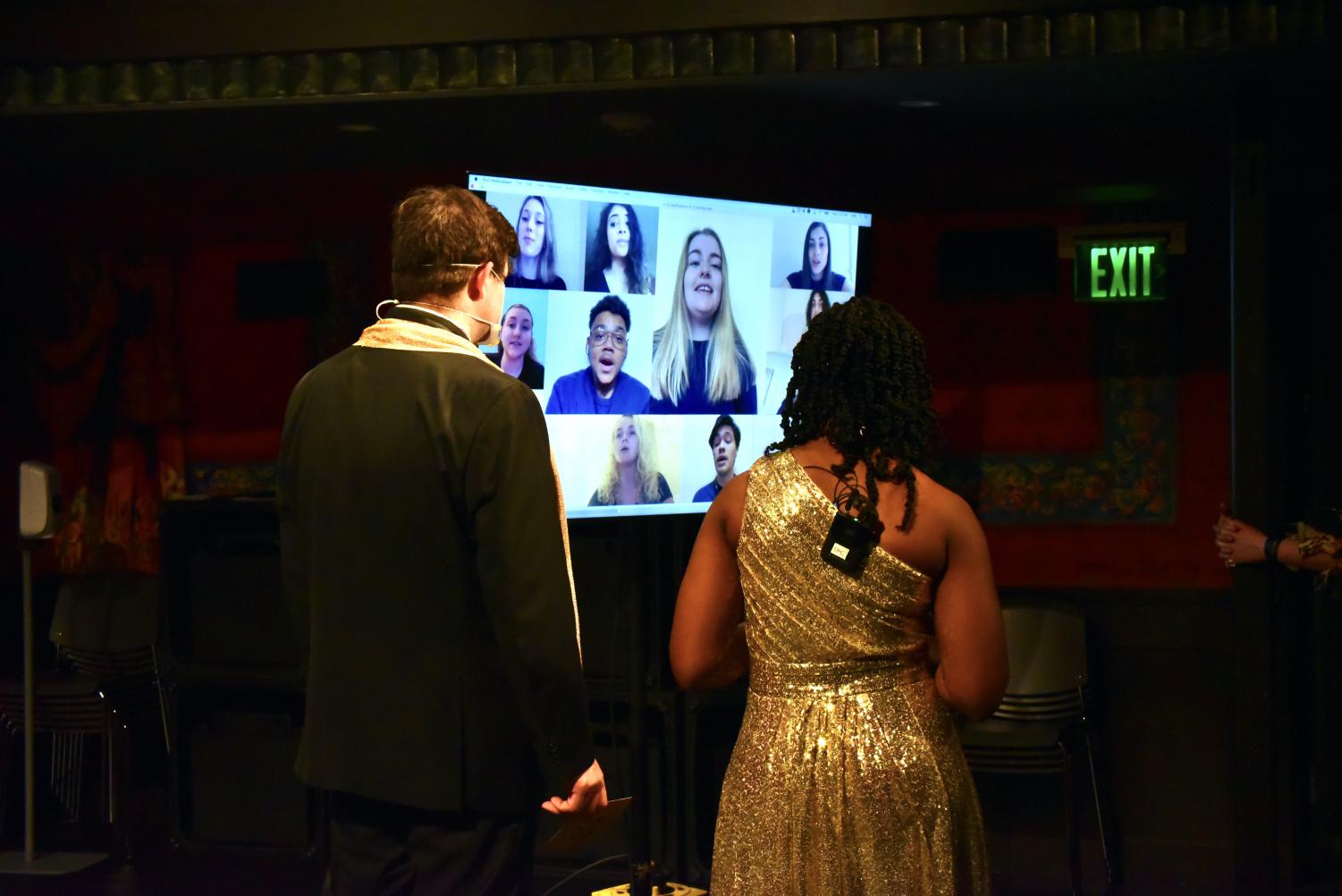 Spring Fest closes the semester on a high note

The 15 act show, which aired on Facebook April 23, pulled together individual students and groups from around campus, all of whom had to audition for their role in closing out the semester.

The first act, Gio Cassella was a double threat. He not only sang his own rendition of Lady Gaga’s “You and I,” but also featured his photography from over the past year. As the song played in the background, pictures crossed the screen in a way that felt as if the isolation he faced also brought a sense of togetherness to the audience.

Next up was Suffolk Latin dance group Pasión Latina, who performed a choreographed number. This group captivated the audience, letting those sitting at home forget that the performers were wearing masks.

The Suffolk Ramifications, an award-winning acapella group, took the remote stage next.

“If you want to hear more of their work, call Suffolk and you’ll be put on hold so you can hear them,” Sylvestre joked. The group’s rendition of Kanye West’s “American Boy” was recorded by each member separately and edited together.

Morgan Torre was up next. Torre, who is also a copy editor for The Journal, has spent 16 years performing and competing in the sport of baton twirling. She twirled to “We Run the Night” by Havana Brown and Pitbull. Torre’s performance was flawless, with her dropping into a split at the beginning of the performance and keeping pace with the fast-paced song as she added more batons.

Professors Vicki Karns and Bob DiGuardia performed “Puff the Magic Dragon” by Peter Yarrow. Their vocals worked together with a comfortable ease that told a story while also reminding the audience of a simpler time.

Caleb MacDonald sang Adele’s “Love in the Dark” with a hauntingly empty Boston as his background.

One of the more upbeat performances was given by Fusion Dhamaka, Suffolk’s Bollywood dance group. Each member performed the dance in different parts of the world, but their movements flowed seamlessly into one another’s patio or home. The dancers were lively and took pride in each movement they made.

There were more vocal performances from groups like Soulfully Versed, who performed “Bottom of the River” as well as Annaliese Arnsten, who wrote and performed her own song “Daylight.”

A tap dance was one of the solo acts, performed and choreographed by Celia Peterson and recorded by The Journal’s managing editor, Emily Devlin.

The Suffolk University Dance Company did a contemporary ballet piece that featured the group together as the choreographer danced remotely. The dance was beautiful and haunting, with each dancer embodying the movements eloquently.

Luis Navarro was the last solo student performer, singing a mash-up of Bad Bunny songs. Navarro sang in Spanish, and his voice made the audience feel each word he sang.

The Suffolk Shufflers, a group made up entirely of Suffolk staff, sang “If I Can Dream” made famous by Elvis Presley.

The final number, a group effort, was performed by the members of Spring Fest as they sang and danced to “You Learn” by Alanis Morrisette. Pictures of a pre-COVID Suffolk played over the screen. American Sign Language was also utilized to bring a heartwarming and inclusive feeling to the number.

The last performance showed what we had all been missing. It showed an inclusive and welcoming atmosphere that was not only felt online, but in person; the atmosphere college students had planned for and are looking forward to returning to. It was both heartbreaking and gave the audience hope.

Each performer poured their sorrow and happiness from the pandemic into their pieces, giving the audience a chance to close the semester on a note of reflection and optimism.