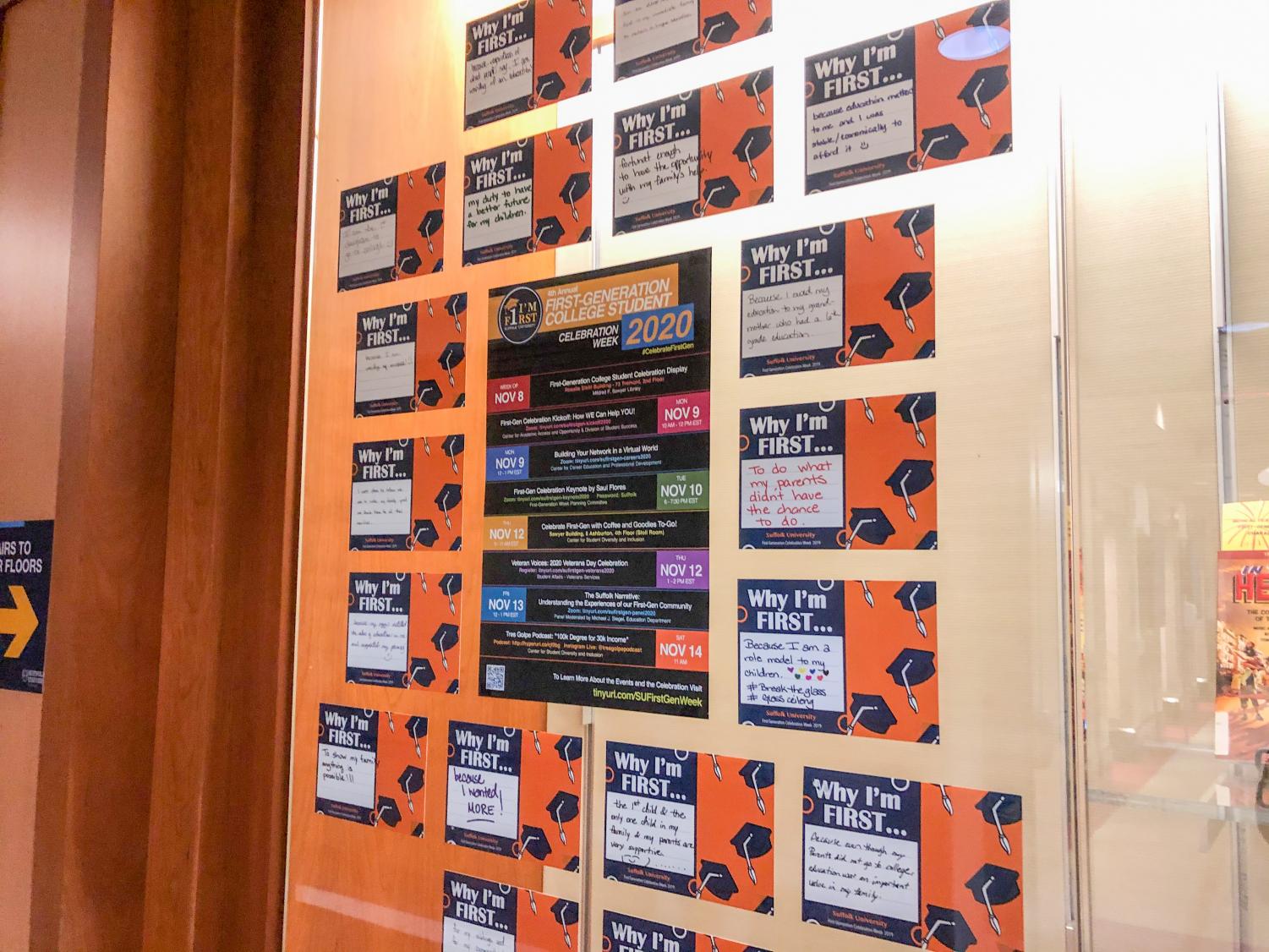 First-generation display outside the Sawyer library

A Nov. 13 panel of faculty members and students discussed the obstacles they overcame as first-generation students, and how the Suffolk community can provide assistance for current students, as part of the 2020 First-Generation College Student Celebration week.

The event, which was held by the Suffolk University Education Department and the Center for Academic Access and Opportunity (CAAO), was moderated by Dr. Michael Siegel, an associate professor of Suffolk’s educational department.

Panelists emphasized the importance of providing resources for first-gen students and becoming mentors for those who could use guidance entering college, especially during the pandemic.

Williams is a 2020 Suffolk master’s program graduate. She currently works for the Boston Private Industry Council, a non-profit organization that works to enroll Boston community college students in four-year universities.

She shared that because some of her family members attended college, she felt as though she had enough experience to navigate through schooling on her own. However, throughout her experience, she felt under-prepared and struggled because she was not taking advantage of the resources available to her.

She did not understand that as a student, she could ask for what she needed.

“I felt like they already allow me to be here so I am going to be asking too much if I asked a professor for some time of extra help or something like that,” said Williams.

Yap was raised by parents who understood the importance of education. She began her schooling in Singapore as a first-generation student but said she struggled to feel any sense of belonging within the culture, as she shared on the panel. She felt frustrated by the way her experience was harder in many ways compared to the other students, since she did not have as many connections or means to complete her work.

“It set me back and it honestly made me really angry. It’s not fair,” said Yap.

She decided to continue her education in the U.S. and has come to appreciate the resources Suffolk provides. As a part of the Center for Student Diversity and Inclusion, she advised students to get more involved on campus by joining clubs, since this can help them to find a sense of belonging.

“I think that is something we don’t realize because we feel like we have to work so hard to be on the same level as everyone else, that we have to remember to do that,” said Yap.

Didriksson has been the reference librarian at Suffolk since 2000. As a student in the 1970s, she was raised by parents who experienced the hardships of the Great Depression, World War II and the Korean War. Unable to attend college themselves due to financial limitations, Didriksson’s education was made a priority.

As a first-generation student, she was never relieved of the stress and pressure to do well in school for these reasons. She explained that she did not receive help with school work and was raised not to ask for help.

“While I was in college, my impression of the expectations on campus for all students basically was, you’re here, congratulations, now go and do the work,” said Didriksson. “The idea of benign neglect– I think that really captures what the prevailing attitude was and, not necessarily just for first-time students, I think it was you apply, you get in, you should thank your lucky stars and now you have to go and work.”

Hogan was raised as a first-generation student in the Pine Point District of Springfield, Mass. in the 1960s by her parents, who did not receive higher education. She graduated high school at the age of 17 and did not see education or a career in engineering or chemistry as an option for her. After receiving guidance from a mentor at her school, she decided to attend college and soon changed her major to chemical engineering. This decision placed several obstacles in her path.

“I was told by the then-chair of the chemical engineering department that I didn’t exhibit the right kind of intelligence because I didn’t have a math verbal split… that I was too friendly to be an engineer and that I was female,” said Hogan.

She went on to be one of the first female chemical engineers and received two degrees in engineering and two in chemistry, one of which was a PhD. She emphasized how essential it is to persevere through the struggles first-generation students may face and to find mentors that will support you through them.

“This is your life. So you make decisions on what you want to do. And when people put up obstacles in front of you, don’t look at them as like, ‘This is impossible,’” said Hogan. “Do what my mom used to say. She used to say, ‘Okay, that obstacle in front of you, go over it, go around it, go through it.’ And that was always my approach.”