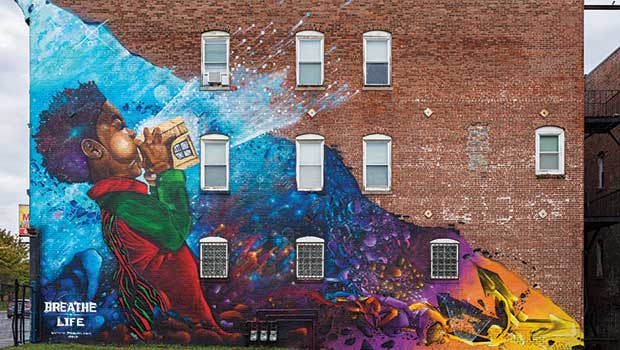 "The panelists agreed that where art comes from is important and Black voices need to be prioritized in the arts space."

On Oct.13, WBUR CitySpace brought together a virtual panel of Black leaders and artists to discuss where bias exists in Boston’s arts community, and how the city is elevating and amplifying new Black voices in the arts.

This was the fourth discussion highlighting transformative Black leaders across Greater Boston that has been hosted by Boston University Initiative on Cities, WBUR CitySpace and Boston University Diversity and Inclusion. The talk was originally scheduled for March, but was pushed back because of COVID-19.

The discussion was moderated by Crystal Williams, the associate provost for Diversity and Inclusion at Boston University and an award-winning poet. Panelists included Maurice Emmanuel Parent, the executive director of the Front Porch Arts Collective, Makeeba McCreary, the chief of learning and community engagement at the Museum of Fine Arts (MFA) and Catherine T. Morris, founder and executive director of BAMS Fest.

The hour-long event, streamed as a live YouTube video, discussed the history of Black art in Boston, the power structure of Black art, and how the pandemic has impacted this and the panelists’ vision for the future.

“The Black arts scene in Boston is rich, it’s historical, it’s generational, it’s complex, it’s segregated, but it has the opportunity to shift change and challenge how the city views Black arts,” Morris said.

Parent added that in Boston, Black theatre goes back to the 1920s and 30s, but it is still currently dominated by white institutions and patrons that pose a threat to this rich, diverse city.

“[Boston] also has to fight against national narratives that are not fair to the city,” said Parent, who has lived in Boston for the last 16 years.

Williams even shared a story of when she recently saw a virtual play about Black people and was surprised by the performativity of Blackness. She was also struck that she and her guest seemed to be the only two Black people in attendance, and noted that this is often the case for any show or exhibit she views in Boston.

There was one moment when even an audience member typed in the event’s live chat that as an employee at the Isabella Stewart Gardner Museum, they don’t see many Black, Indigenous and People of Color (BIPOC) filling the galleries.

The panelists added that this can be due to venues and arts spaces not being owned and operated by Black and brown people, and that a lot of the older institutions were all predicated on a certain kind of art that often doesn’t fit Black narratives

“Boston has already had the fundamentals of Black art here, the problem is that the platforms that support it are very few,” Morris said.

The panelists agreed that where art comes from is important and Black voices need to be prioritized in the arts space. To the panelists, it shouldn’t be about who writes the check, but whose work and perspective is actually valued.

“We need to privilege the conversation of an audience being Black and brown…because one is not going to make an event, we are so far behind in that sense,” said McCreary about needing to value Black patrons.

Parent said during the discussion that representation through leadership also matters, and that this is already starting to happen.

He said he is seeing his fellow Black colleagues rising through the ranks of different theatrical institutions and that overall, there is more BIPOC leadership across the board.

Parent said Dawn Simmons, who is the executive director of StageSource, is an example of this, while McCreary gave a shout out to Edward Greene; the MFA’s first Black board of trustees president in its 150-year history.

To value Black artists, Morris spoke directly to the live audience of mostly higher education institutions on how to prioritize and welcome BIPOC artists, creators and performers. Morris encouraged institutions to change their criteria to be more localized to Black and brown artists, bring in BIPOC guest speakers and pay them for their time, change marketing materials to be more diverse and integrate more local artists in student groups.

Parent, who runs Boston’s first professional Black theatre company, has committed himself to rewriting Black narratives in a positive light and creating a welcoming and inclusive space for BIPOC. Parent did this by hosting #BlackOutBoston, a night that showcased “Choir Boy,” a play that was created by Black people, for Black people.

“It was a curated, performance event to create that atmosphere of seeing your culture on stage and being surrounded by folks that are also from that culture…” Parent said. “The arts are vital and the arts can be healing.”

The arts industry has changed dramatically as a result of COVID-19. Each of these panelists, who are leaders of Black art in Boston have adapted their programs to Zoom and other streaming platforms, which in turn has increased access for audiences and has created different ways for content to be shared.

COVID-19 has also given the Boston arts community a chance to support local arts more, since fewer tourists are visiting the city, and to really question who is exactly being represented in the arts scene here.

Parent even worked with his company on Starlight Square in Cambridge, a new outdoor community theatre which was created with social distancing measures in mind. They were the fourth company in the nation to be approved by an actors union to give contracts during the pandemic.

These panelists are looking forward to the future of Black arts in Boston, such as seeing more Black people in leadership roles, increased collaborations among Black artists and greater sustainability and innovation in the arts.

“I’m excited about pushing… and saying that we can do better. It’s not an option if this city is going to heal,” McCreary said.

For those who are interested, you can watch the pre-recorded discussion here.