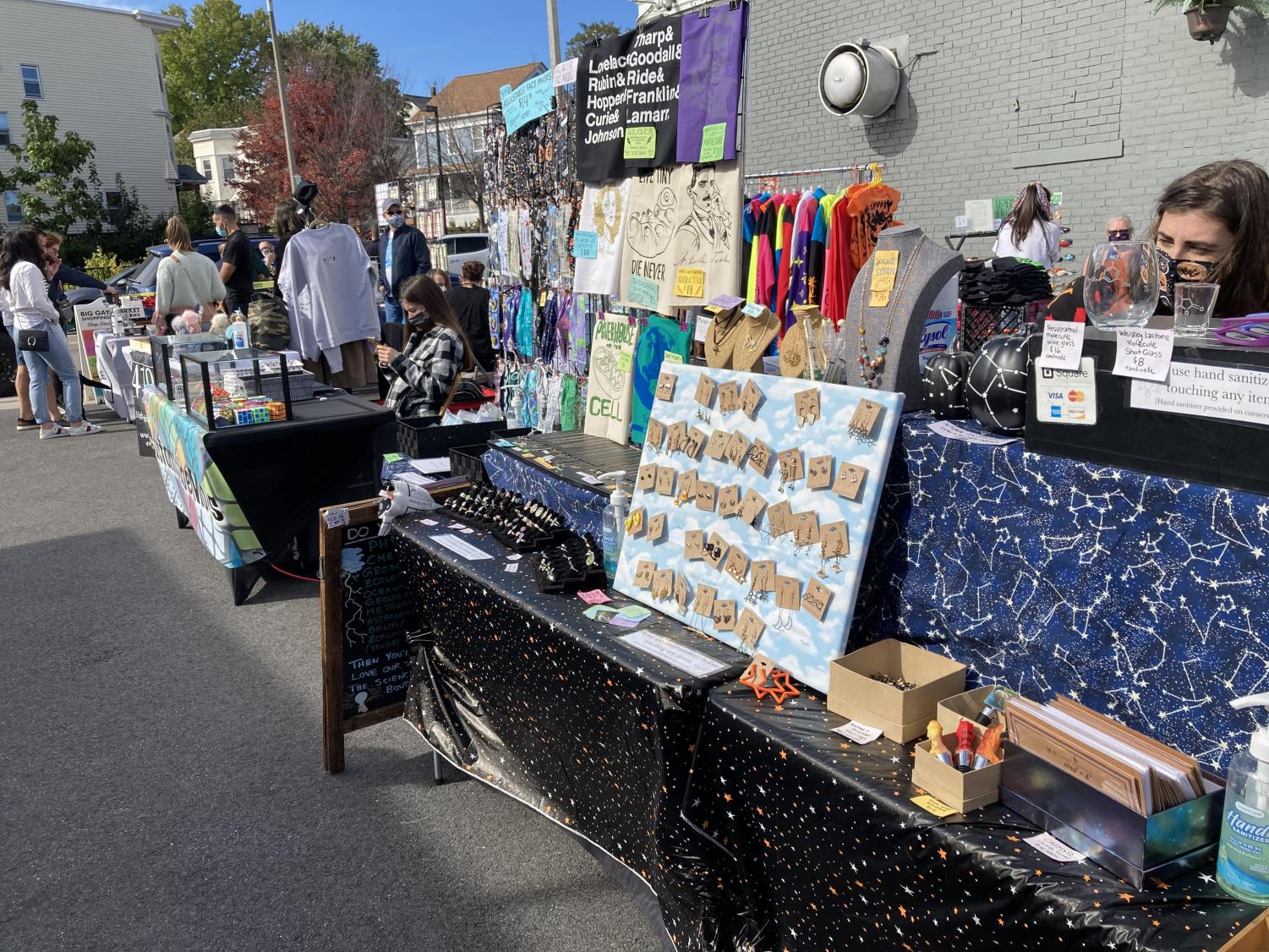 Vendor stalls at the Big Gay Market in Dorchester on Oct. 11. (Ashley Fairchild)

Vendor stalls at the Big Gay Market in Dorchester on Oct. 11.

The Big Gay Market in Dorchester opened this past weekend, Oct. 11. for its first event since the COVID-19 pandemic hit Massachusetts. The event coincided with a disco brunch at Blend, a hip restaurant right next door to the market on Dorchester Ave.

Upon arrival at the Big Gay Market, three things were immediately apparent: the drag queens, the disco music and the safety protocols that have been put in place to keep shoppers and vendors alike safe, including the change to its “sip and shop” experience for customers.

“Due to the current guidelines, we won’t be able to have people walking around with cocktails in hand, which takes away from the sip part of the market,” said Luis Arzuaga, the manager of Blend, which sponsored the market.

Though the lack of cocktails was noticeable, the vendors were still doing their best to have a good time and boost positivity in a time where it is sorely lacking. All of the vendors in the market are LGBTQ+ affiliated, and most handcrafted products, like pride jewelry, promoted acceptance.

“I’m excited to see and support the representation of LGBTQ+ businesses in the community,” said Laura Snodgrass, who was shopping at the market.

Due to COVID-19, the shoppers were instructed to shop with their eyes only, and let the vendors handle the products until they are purchased. They also directed traffic in a way that left more than six feet between shoppers and separate walking paths. The market also asked shoppers to pay with cards instead of cash.

A new addition to the shopping experience was a livestream of the event, where potential shoppers could check out the market and drag performances from the comfort and safety of their homes.

The market also took the inappropriate and made it appropriate.

Lisa Geczi, the owner of Bella & Harvey, a sweets stall, had a “very fun” bag of chocolates. The bag in questions contained four phallic candies, which made Geczi chuckle.

“I can’t take these to the normal farmers market, where people are spending nine dollars on an orange. Can you imagine? They would be outraged,” Geczi said.

The chocolates were just a small nod to the overall fun and edgy feeling at the market.

One of the more notable additions to the market that you also don’t tend to see at other farmer’s markets were the drag queens.

Miranda Wrights, a drag performer at Blend, worked the pandemic into their act.

“It’s weird doing a lip synch with my whole f****** face covered, but at least you won’t realize I don’t know the words!” said Wrights, who performed in full drag with a mask and face shield and, at times, a hazmat suit.

Many stalls were also offering items to make quarantine easier, such as playful printed face masks, hand sanitizers and buttons that stated just how far back someone should be.

Anashi Danderea, who owns Eriu Studios, a shop that sells funky pins and more, noted how different the customer turnout was for this market compared to the ones held before the pandemic.

“The last market we had was in February, before everything happened. It was packed wall to wall with people, you couldn’t move,” Danderea said.

Now the crowd is much tamer, and the number of customers are far more limited. But the Big Gay Market and Blend’s disco brunch is still a place for anyone looking for a Sunday full of laughs, interesting products and a fully welcoming and accepting crowd.