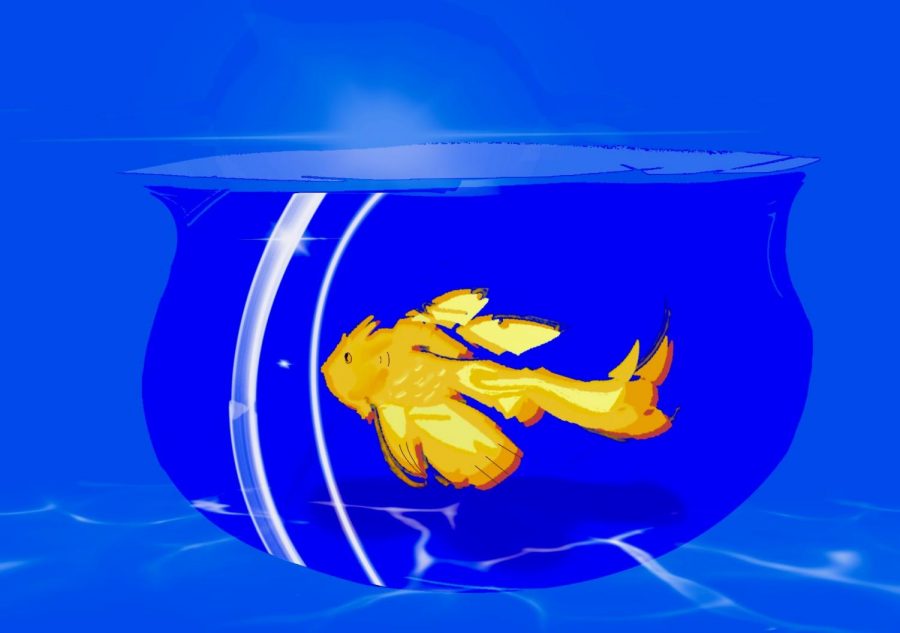 The meaning of color: a look at racial injustice and diversity

Lately, I have been feeling like a little fish living her life in a great, round fishbowl.

Now I know that sounds far fetched and strange, but let’s say I’m a fish. I know I’m not and I’m a fine, living, breathing human. But for metaphorical purposes let’s pretend I am a little, turquoise-colored fish with glinting, silvery scales with fluttering gills that open and close as I swim in my glass fishbowl. The limits of my swimming are confined to the rounded, hollowed insides of this watery, translucent cage but life is calm, there’s no real danger, all I need to do is float and swim calmly and life will be good.

As long as I swim in my bowl as I always had, I can ignore the recent headlines that almost seem to exist in a sci-fi novel. Headlines that create a story of racial tensions, death and disease, hopelessness and confusion, and a world where terror and change threaten our perception of a “normal” life.

I grew up in a mid-sized town in Massachusetts and after graduating high school, attended my first year of college in Boston. Unfortunately, like the rest of the world, once March hit, I was asked to leave my usual daily schedule of school and work and had to hunker down and stay indoors while a deadly virus raged on outside my window.

I had already come home for the first time from college for the holiday season but this time felt different, and perhaps it was because I was here for a longer, extended-time period. But that was not the only reason.

I guess I always grew up a bit caught between two worlds, as I grew up as a half-Korean girl in a predominately white town. During some of our summers, my parents would take me back to my mother’s hometown in South Korea and I would resume my ‘other’ life speaking Korean amongst my friends and cousins there, eating traditional spicy soups and dishes and even attending the concerts of my favorite K-pop artists. But, I also grew up in a world of Cape Cod vacations, Diet Coke and McDonald’s hamburgers and trips with friends to the mall shopping at Brandy Melville and American Eagle.

I’ve always felt a disconnect between these two halves. There were these two worlds I had that seemed to me like two balloons, held in my one hand, but floating apart from each other.

I attended my high school as the only Korean and the only half-Asian girl in my grade, and while I was friends with several of the other Asian Americans at my school, I still felt a slight disconnect with trying to connect with my Asian culture in a conformist high school environment. Most of my close friends were white and I felt a bit strange oftentimes talking about my Korean culture, even though I couldn’t really place why I felt that way. Perhaps it was because I didn’t like talking about a part of me that set me so blatantly apart from my other peers.

When coronavirus began and racism against Asians due to the virus became stronger, an Instagram account was created during quarantine as a way of anonymously sharing stories of racial bias and discrimination within my town. I believe that part of the reason why this was created was due to the widespread surge in the Black Lives Matter movement after George Floyd’s death in late May and the need for more BIPOC’s voices to be heard.

When I first started reading other POC’s anonymous messages about their unpleasant and racist experiences within my town I grew depressed. Additionally, reading more information about Breonna Taylor, Elijah McClain and countless other victims that had suffered unjustly in racially charged attacks or situations, only increased this feeling of sadness and anger that I felt.

Never before had I really felt so aware of the societal meaning that became placed upon the colors of our skin. Never before did I truly start to realize that POC’s existence was threatened because of the shape of our eyes, the melanin in our skin and the different languages that we spoke from our lips that were passed down through our ancestors’ tongues. This depression grew into a fiery seed of anger that I had never felt before inside of me.

I wondered if I actually chose the clothes and style I had because I genuinely liked them or if I bought them because I was trying to assimilate for so long in high school, trying to adapt to the certain style that most of my white peers would have. I started asking myself why I felt uncomfortable talking about my culture and why I would even sometimes make jokes about being Asian. I re-examined all the times I just let it slide when my seventh-grade writing teacher said that people liked girls who looked exotic like me. And why I was so compliant and accepting of the time when my driving instructor asked me if my mother was oriental.

Once I started to hang out with my friends during the summer, when we could see each other more at a social distance, I felt like that fish in her fishbowl who watched the world she used to know. All the places and people that she was once felt so familiar with felt so disconnected from her.

It was almost like I was listening to conversations, talking and seeing things through a glass wall, and while the wall was thin it felt like even if it eroded away in the future I would never forget that the wall was once there. The glass fishbowl I swam in allowed me to stand back and gain a shifted perspective. A perspective that is more demanding and inquisitive and no longer thinks and accepts her world neutrally and with assimilation. It’s a perspective that now calls me to seek upon how I will take action in coming to terms with my own racial identity and how I want to do my part in changing a world that I wish would be more accepting of my BIPOC brothers and sisters.

Color is important. Representation is important. And most of all, justice is important. This time we live in may seem scary, terrifying and uncomfortable, but I believe that without it I would never have truly started to really question the world I live in or see it in a new harsh light.

Now is the time to not only take action and gain perspective, but also for people of color to remind ourselves to love ourselves for who we  are. Never forget that the beautiful skin we wear was passed down from countless men and women that came before. While we continue to live in this strange new reality, I urge us all to hug ourselves and love our unique beauty, and to keep looking forward to a future that we can only hope will be different from yesterday.