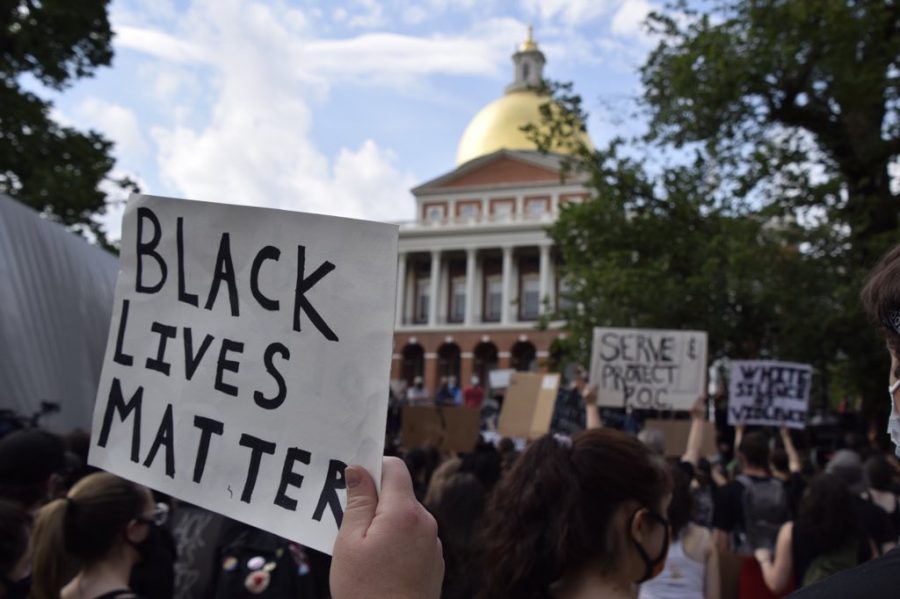 A peaceful protest was held in Boston Common Wednesday to protest police brutality and honor George Floyd, an African American man who was killed by Minneapolis police May 25.

Those three words were some of the last ever spoken by George Floyd, a 46-year-old African American man who died May 25 after Minneapolis police officer Derek Chauvin knelt on his neck and pinned him to the ground for nearly nine minutes.

Chauvin has since been fired from the force and was charged with second degree murder Wednesday, after he was initially charged with third degree murder May 29. The three other police officers who witnessed Floyd’s death also lost their jobs and were charged Thursday with aiding and abetting murder.

Mostly peaceful protests continue to be held across the country and other parts of the world, with “I can’t breathe” becoming a rallying cry for justice and change.

Wongly Sine, who graduated from Suffolk University in 2019, was one of the thousands of demonstrators who took part in a peaceful protest in Boston Sunday afternoon.

“When we all come together under one goal, nothing can stop us and that’s what I saw on Sunday,” Sine said. “Black, White and others all gathered to demand long term change and justice. Together our voices will be heard.”

Protesters met in Nubian Square and marched to the Massachusetts State House while holding signs that honored Floyd and called for an end to police brutality.

“[The demonstration] shows that if we all really take time and learn and continue to fight, change can and will happen,” Sine said. “I just hope that people can finally realize this is not just a White and Black issue anymore. We’re all human and that’s all I, and my Black brothers and sisters, want to be seen as.”

Cecilia Gonzalez, a rising junior at Suffolk, attended Sunday’s protest in Boston and a candlelight vigil and protest in Quincy Tuesday.

“These were protests for the Black Lives Matter movement and as someone who is not black, I feel as if it is my role to support and uplift black voices rather than speak over them or speak for them,” Gonzalez said. “Their voices needed to be heard and there was a massive crowd listening and supporting them.”

Protesters also held a die-in on Boston Common Wednesday, during which demonstrators laid on the grass in silence for 8 minutes and 46 seconds: the same amount of time Chauvin pinned Floyd to the ground.

But Floyd’s name hasn’t been the only one mentioned during demonstrations this week.

Protesters across the country have spoken and chanted the names of other black victims of police brutality, like Eric Garner, Michael Brown Jr. and Breonna Taylor.

Garner died after he was put in a chokehold by New York City police officer Daniel Pantaleo in 2014. Pantaleo was not arrested or charged in Garner’s death, even after it was ruled a homicide.

Brown was 18 years old when he was shot by a police officer in Ferguson, Missouri, in 2014. Nationwide protests were held in the following days and weeks after the officer, Darren Wilson, was allowed to return to duty and was not indicted until months later.

Taylor died in March after she was shot eight times by police who said they entered her Louisville, Kentucky, apartment as part of a drug investigation and shot at her boyfriend, who pulled out a gun when the officers entered unannounced. The suspects in the case were already in custody, and Taylor wasn’t the person police were investigating.

Sadie Backstrom, a 19-year-old student at the University of Maine, attended Wednesday’s die-in. She hoped the demonstration helped educate others about police brutality and showed the need for reform within the judicial system.

“Statistics show a racial bias when it comes to policing and juring, as well as the education system, housing, and so much more, many of which have been created through the history of slavery/segregation,” Backstrom said.

She said the demonstration was moving, but also a little nerve-wracking, since violence had broken out in the streets of Boston after Sunday’s peaceful protest ended.

“After watching the week’s worth of police violence at peaceful protesters, including Boston, there was definitely an air of nerves when we were marching through the streets passing cops and National Guardsmen, all of whom were carrying weapons,” Backstrom said.

But protests in Boston and most other places in the state have been peaceful. On Tuesday, thousands gathered in Franklin Park for a march, vigil and die-in to demonstrate their frustration with the American criminal justice system.

“[Tuesday’s protest] felt very powerful, like we were there actually making some sort of difference and I want to reiterate this as much as I can, everyone was so extremely peaceful, powerful, and so respectful of everyone around them the whole time,” said an Emerson College student who attended Tuesday’s protest and wished to remain anonymous.

Many of the demonstrators feel that these protests are truly turning into a movement.

“It’s not just about the killing of George Floyd, of course, that’s a part of it, but it’s all of it, it’s everything. We don’t just say his name at the protest,” the Emerson student said.

The student said that there needs to be not just social change, but legislative change, as well. Sine agreed.

“Protests are one way to be heard, but I hope we will also vote because no statement I or anyone makes will change anything if we don’t find and elect people who genuinely care about the issues my community has been battling for so long,” Sine said.