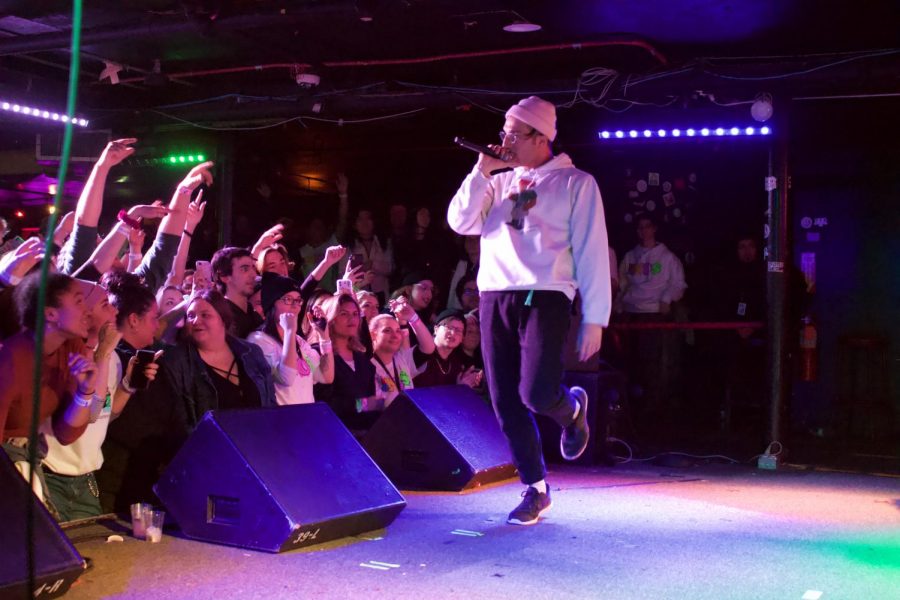 With an exciting setlist, bbno$ (pronounced baby no money) had an action-packed night during his sold-out concert on March 5 that never ceased to excite the crowd at the Middle East Nightclub in Cambridge.

Performing his hits, “Lalala,” “tony thot” and a new collaboration with Lentra, “out of control,” his energetic performance made the crowd go crazy. While there was a lack in presence of his normal song partner Yung Gravy, bbno$ seamlessly belted out the lyrics to their upbeat hip-hop hits with the assistance of a lucky audience member. She joined bbno$ on stage to rap Yung Gravy’s lines in the songs “shining on my ex” and “Whip A Tesla.”

Before the Canadian rapper hit the stage, fellow artists Swerzie, Lentra and special guest Jungle Bobby were all assisted by DJ Dan in performing their music as the opening acts. They turned Boston into a farm as all three collaborated with Jungle Bobby to perform his song “OINK,” and Lentra stirred up the Mario Kart lovers in the crowd with his song “Rainbow Road.”

With bbno$’s dynamic setlist, the fans packed into the basement of the Middle East Nightclub were in for a fun-filled night. The artist continuously revved up the audience by taking a swig out of freshly opened bottles and shouting, “who likes water?” as the audience went wild over the thought of hydration.

It surely was a show that convinced fans not to miss the next one, as the energy during bbno$’s performance was out of control. The intimate venue was perfect for the up-and-coming artist. The props on stage accentuated his quirky style as oversized wooden blocks spelling bbno$, a kid’s slide and a racecar bed were featured on stage.

The social media app TikTok has been a major contributor to bbno$’s recent success, with many of his songs featured in the short, viral video clips. On top of his music’s online success, he has managed to retain that momentum live with catchy lyrics and funky beats that make you want to keep dancing.

While his songs may be obscure to some, they have a way of capturing your attention with the well-written, somewhat facetious lyrics. In one of his newer songs, “Welcome to Chili’s,” bbno$ takes a comical approach to describing designer items by rapping “I got the pepperoni pizza, Fendi frames and blue cheese lens, yeah.” It is these witty, captivating lyrics that draw people into bbno$’s music, and his performances keep fans wanting more.