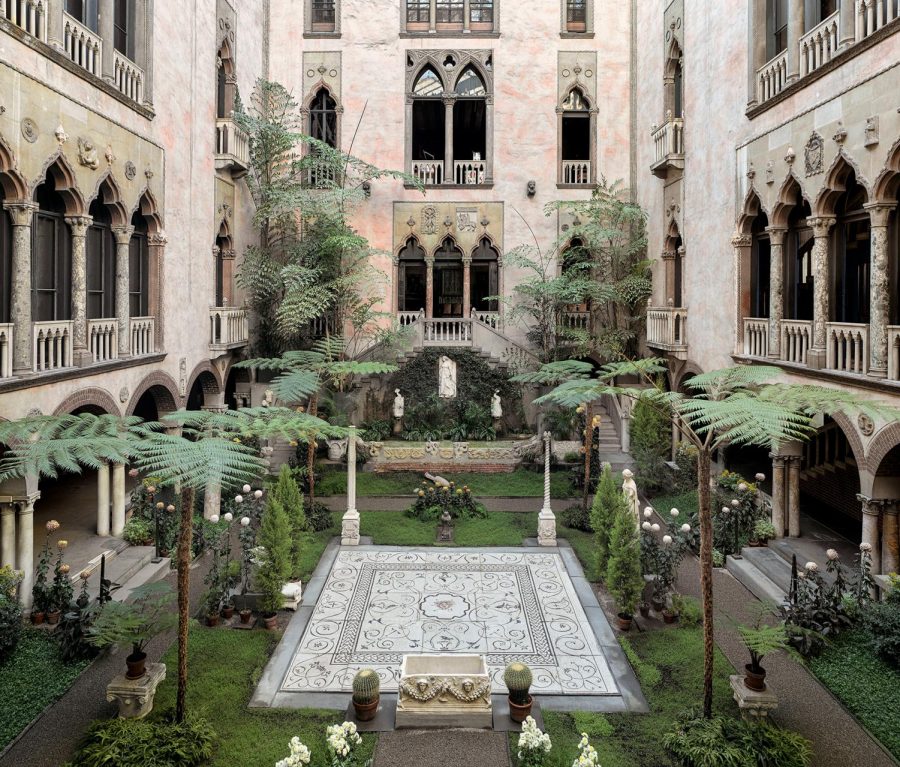 The courtyard inside the Isabella Stewart Gardner Museum

All it took was 81 minutes for a pair of thieves to steal 13 pieces of artwork from the Gardner Museum.

The WBUR and Boston Globe produced podcast, Last Seen, goes through the events of the night.

Just before 2 a.m. on March 18, 1990, two men dressed as cops pushed the buzzer at the side door of the Isabella Stewart Gardner Museum.

They told the security guard, 23-year-old Rick Abath, they were sent due to a noise complaint.

With Boston’s St. Patrick’s Day festivities still occurring and a fire alarm from the Gardner’s carriage house going off earlier in the night, the explanation seemed plausible. So, the men were let inside.

After being asked if anyone else was there, Abath called down his partner, Randy (in an interview with the Last Seen podcast, he did not want his full name used.) Naturally, Randy thought they were there because of the fire alarm.

One of the men said they recognized Abath and requested to see his ID. They then claimed they did know of him and how there was a warrant for his arrest.

The thieves then started duck tapping the security guards’ eyes and mouths.

“This is a robbery,” one of the men said to Randy.

The thieves had assured Abath and Randy that if they followed instructions they would not get hurt. They were led to the basement and handcuffed to pipes.

It wasn’t until eight hours later when police finally came down and released the guards.

Motion detectors documented the movement of the thieves throughout the heist. Over and over a message was printed: “! SOMEONE IS IN THE DUTCH ROOM. INVESTIGATE IMMEDIATELY!!!”

For 81 minutes the thieves went in and out of the museum, taking artwork after artwork.The police did not arrive until 8:15 a.m.

There is a reason that the theft is so devastating.

Isabella Stewart Gardner had been an art lover her whole life, explains the museum’s website.

After her one-year-old son died in 1863, Gardner became depressed. In the hopes of reviving her spirits, her husband took her on many trips around the world. She started to purchase art and artifacts to showcase back in Boston, drawn to the city’s culture and intellectual life.

Gardner bought a plot of land in the Fens to create a museum to house her collection after her husband died in 1898.

The museum officially opened on January 1, 1903.

Living on the fourth floor of the building, Gardner would arrange, and rearrange, the rooms of the museum for the rest of her life. The museum itself became a work of curated art.

She died in 1924 at the age of 84 leaving the museum “for the education and enjoyment of the public forever.”

In her will, she also stated that nothing in the museum is to be altered, added or removed.

However, 87 years after the museum opened and 66 years after Gardner’s death, 13 pieces of artwork were taken.

The pieces stolen include:

All together the pieces are priced at $500 million.

According to the Boston Herald, an FBI agent tasked with investing the Gardner Heist believes, as of June of 2019, some of the paintings may not be in the United States anymore.

There is currently a $10 million reward out for information that directly leads to the recovery of the works. A separate reward for the eagle finial is set at $100,000.

It has been 30 years and there is still no sign of the lost art.

A haunting image of empty frames hanging where the canvases were cut out or removed, obeying Gardner’s request to leave everything in her museum as it is.

Interested in learning more about the investigation? Listen to the Last Seen podcast: https://www.wbur.org/lastseen

Have information on where the art is today? Call the Gardner Museum’s Director of Security Anthony Amore at  617-278-5114 or send an email at [email protected]