In 1922, 19-year-old Clarence Peters was killed by millionaire Walter Ward in New York City. After the teenager’s body was discovered, a lengthy trial and investigation emerged, capturing people’s attention from around the world. Although the case captured international attention at the time, the story remains widely unknown today. Suffolk senior Justin Peavey is reviving the murder of Peters, his great-great-uncle, in “Doughboy.”

Peavey debuted his original play, which he wrote and directed, as part of the Suffolk Spotlight Series at the Sullivan Studio Theatre on Dec. 6. The true crime show takes place during the final day of the trial, with testimonies from witnesses and relatives interwoven, to focus on the biggest developments of the investigation.

“It’s just interesting to give a voice to people who didn’t have one, and also reviving the voices of those who did,” said Peavey.

After speaking with a distant relative and conducting research about his own ancestry, Peavey discovered he was related to the victim. Since the story of Peters’ death comes from a side of Peavey’s family he knows little about, he was on a mission to unearth as much of the past as he could, and later deciding to turn his findings into a blackbox production.

The playwright tried to stick as close to the facts as possible when putting the ambitious show together, which required months of research. Most of the information about the trial cannot be found online, so Peavey spent months digging through old newspapers and other alternative sources.

Peavey retrieved official court documents and photographs that were used as evidence during the trial. He also incorporated photos of the characters by projecting them on the screen behind the actors during their opening lines.

“It’s been a tough project to conceptualize but once we had the cast, everything just kind of fell into place,” said Peavey. “Everything was really easy from that point on because I was able to bounce off of the actors a lot, bounce off of my team, the designers and stage managers and all of that, and able to come up with something that I think is really beautiful.”

Although some of the script is dramatized, the monologues borrow text from the court transcripts and pieces of information Peavey learned along the way. The writing process was difficult because he had to condense a large amount of information in creative ways, such as combining similar testimonies from multiple witnesses into one character. Some scenes also depict his own interpretation of things that might have happened.

After probing through a variety of sources, Peavey formed his own opinions about the investigation. As he was writing the script, he struggled with trying to include all the possible things that could have happened.

“I was stuck a lot trying to write about my theories, a possible ending to kind of tie up all the loose ends,” said Peavey.

The play’s plot finally clicked in his mind when a revelation came to him over the summer and he realized the message he wanted to send with the show. At the time, he had four separate drafts for the show, which he combined into one, forming a completely different script overnight.

“I’m trying to tell this class story between the wealthy and the poor and the effects on each group when their timelines cross,” said Peavey. “…It borrowed a lot of dialogue from each of the scripts and it was tied together with something that was totally new and totally different.”

The play’s small cast made it easy for Peavey to bounce ideas off the actors. If there was extra time leftover after rehearsal, the group would have discussions about the plotline, how to portray their characters and their vision for the final product. He noted that once he was able to put the script down and trust the text, he saw new things about the production he may have otherwise missed.

Wesley Savick, a Suffolk theatre professor and Peavey’s advisor for the show, thinks he should bring the production to Haverhill, MA to honor the weird yet local connection it has to the area. Also, the 100th anniversary of Peters’ death is approaching soon in 2022, so it is  timely to talk about the story.

While “Doughboy” resurfaces hard facts and information from the trial, it’s impossible to know exactly what happened. Peavey said he was looking forward to hearing what audience members think about the trial and characters portrayed on stage.

“Ultimately, we will never know what really happened. The only people that know are the people who were there,” said Peavey. 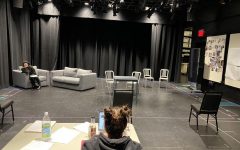