The cover photo of “The Owl,” Zac Brown Band’s seventh studio album that was released on Friday. (Courtesy of Diego Pernía)

The cover photo of “The Owl,” Zac Brown Band’s seventh studio album that was released on Friday.

Country powerhouse Zac Brown Band is known for their twainy vocals and acoustic guitar riffs, but they are pushing the genre’s limits on their latest album as they trade their southern roots for a pop sound.

The band released their 11-track record “The Owl” on Sept. 20. It is clear that the group experimented thoroughly with pop and rap influences in each of the songs. The tunes by themselves are not ear-piercing, but longtime fans looking for the group’s classic country style are bound to be disappointed.

The album opens with “The Woods,” which has an infectious beat that is certainly catchy enough to raise a glass to at the bar. However, it may surprise some listeners because of the heavy bass and drums, and lead singer Zac Brown’s voice is almost unrecognizable.

Pop influences continue throughout the album, like in “OMW.” The song’s introduction teases the listener into thinking that the band is coming back to their old sound, but when the beat drops it goes right back into being another pop song that seems more appropriate for a club setting than a bonfire. The same thing can be said for the following track “Someone I Used To Know.” There are a few moments where the band’s fusion of country and pop seem to blend well, but in many instances, it seems like the group is trying too hard to branch out of their comfort zone.

By the fifth song, some of the southern drawl returns in “Me and the Boys in the Back.” The zesty electric guitar is an interesting touch, but gets a little too loud and drowns out the lyrics. Their rustic vibe is also felt in “Finish What We Started,” which features award-winning singer-songwriter Brandi Carlile. Brown’s deep range combined with Carlile’s iconic feather-like vocals make for a beautiful collaboration.

The album continues to experiment by mixing different genres of music with country, like “God Given,” where Brown raps more than he sings. Listeners could find themselves tapping their foot along to the rhythm, but that is only if they can get past the awkward spoken word.

The band does succeed in blending pop influences into the eighth track, “Warrior.” The patriotic song’s impactful lyrics about the guts it takes to serve as a soldier and trying to understand a soldier’s struggle is sure to make listeners pause and reflect. It strongly contrasts to the following upbeat track “Shoofly Pie,” a silly tune all about the molasses dessert.

Some country flare comes back by the end of the album with the fast paced “Already On Fire.” Brown shows off his low vocal range, complemented by a mix of different instruments. The only part of the song that does not sit well is when his voice is heavily auto-tuned to go even deeper, sounding more like a cheesy narration in a horror movie than a singer.

“Leaving Love Behind” is certainly the best track on the album, which is probably why it was saved for last. The soft tune has the classic Zac Brown Band sound. The saddening lyrics and hints of piano and violin could evoke emotion out of the coldest of hearts. Although it does not match up with other songs on “The Owl,” even if the rest of the album flops, this gorgeous song is destined to be a hit.

Zac Brown Band has come a long way since their hit song “Chicken Fried” hit the airwaves in 2008. While it is healthy for artists to experiment with their sound and style, this album felt like it was extending itself too far to set itself apart from the rest. 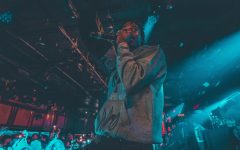