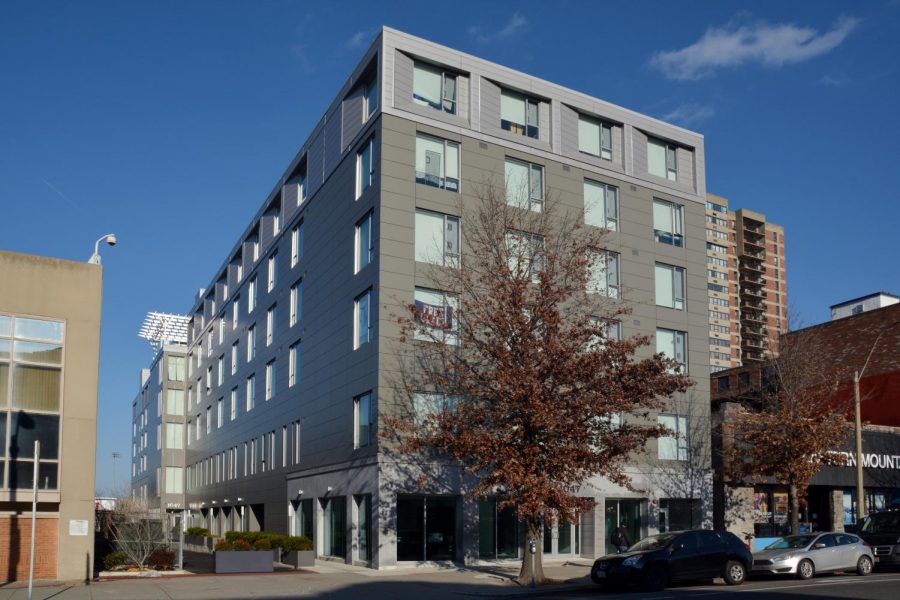 Suffolk University’s newest residence hall at 1047 Commonwealth Ave has received mixed reviews from residents and staff alike as the building approaches the halfway point in its two year contract.

Suffolk acquired the building from Boston University in the last year and is leasing it from The Michaels Companies with an option to renew the lease through the 2022 academic year. Currently, an apartment at 1047 is 1 to 2%  less expensive than a 10 West apartment.

Residents at 1047 receive a subsidized Charlie Card from the university to cover the cost of their commute to and from the Allston building.

“[The university] is extremely happy with the facility itself,” said Shigeo Iwamiya, director of Residence Life and Housing at Suffolk. “It’s offering things we can’t usually offer, like an in-unit washer and dryer, stainless steel appliances, sustainable electricity and appliance building structures that our apartments in 10 West don’t currently offer. But it’s 25 minutes away.”

Iwamiya said they are still exploring the option of extending the two year agreement for 1047, and that the commute is a large issue for residents there.

“I really felt like I was living by myself and like I wasn’t a part of Suffolk,” said Angela Quiterio, a sophomore who said it often took her an hour on the Green line to get to her morning classes during rush hour.

The commute hasn’t been the only deterrent for students living at 1047. Quiterio moved to a suite in 10 West at the beginning of the spring semester after becoming fed up with facilities failing to respond efficiently to maintenance issues in her 1047 apartment when she lived there in the fall.

On her first day living at 1047, she said she put work orders in to fix issues with flooring, a broken light and the fan above her stove, yet never heard back from facilities and said the issues were not fixed by the time she moved out in December.

Although she never saw rodents, Quiterio said she found rodent droppings in her apartment.

“We were concerned because if it’s rats, that’s dangerous, and they basically never did anything [about the problem],” said Quiterio. “We asked if there was anything other than fumigation that could be done and they were like, ‘you can go out and [buy] traps,’ and that’s just not the answer we were looking for. There were a lot of maintenance problems that were never addressed.”

Carina Fresa, a sophomore, still lives in 1047 and said she’s had her own issues with facilities. The door to the closet in which her washer and dryer were located remained broken for months and would occasionally fall off. Her washing machine is still broken after it wouldn’t drain water last weekend and ruined multiple articles of her clothing.

“My roommate and I spoke to our Resident Assistant (RA) who told us to go talk to security and they would call the on-call facilities,” said Fresa. “The SUPD [Suffolk University Police Department] officer was extremely confused and wrote down our issue, names and room number. He then informed us that maybe someone would help us during the week because it was a Saturday.”

A person from facilities vacuumed the water out of the machine on the following Wednesday and said they would come back again to see if the machine was still broken. When Fresa and her roommate returned from class later that day, facilities had left a sticky note on the machine that said “Washer is broken- will need to order a new one to replace.”

“Now me and my roommate are out of a washer until it gets replaced entirely,” said Fresa. “We have no idea what the process of facilities replacing a washer is, how long it will take, how invasive it is and when they will do it. With three weeks left and the track record of Suffolk facilities, I assume it will not be fixed by the end of the semester.”

Despite putting in multiple work orders, transfer student Cassie Cavender has had similar issues with her apartment.

“Maintenance is awful,” said Cavender. “I know the dishwasher has been broken since last semester. A guy came to look at it, figured out what was wrong, and never came back again. The dishwasher still runs, but [the door] doesn’t actually close. The heat and AC have been breaking on and off. When it was really cold, the heat was broken. And then you have the mailroom, which is just awfully put together.”

Both Cavender and her roommate Melanie Boisvert were on the soccer team when they transferred to Suffolk in the fall. They said being in Allston meant they had to leave by 5:30 a.m. to make a 7 a.m. practice in East Boston and after classes, they would not get home until 7 p.m.

Boisvert and Cavender were so unhappy with 1047 that Boisvert spent most nights sleeping on a couch in a 10 West suite and Cavender usually sleeps at her girlfriend’s.

“Suffolk should probably not put all of the new students in 1047 because it makes the transition really hard,” said Cavender. “We didn’t know where anything was, we were on the B-line, which is apparently the worse line, and it made us hate Suffolk at first. If you want your transfers to stay, why put them so far away from Suffolk?”

Iwamiya said this is also a concern of res-life and that the university tries to not put first year students in 1047. He also said more Suffolk signage was added to the building to make it feel more like a part of the Suffolk community.

While students said they were happy with the appliances and appearance of the apartments, Fresa said the lack of response to work orders, especially on the weekends, has been a major downfall of 1047.

“It felt tedious that I kept having to put in the same repetitive work orders,” said Fresa. “One should be enough. It would be helpful if they acknowledged the work orders to some extent or gave us a day where they would come in so at least we knew something was happening and not just sitting in this phase of when are they going to show up.”

Director of Facilities Ashley Lindsey explained the relationship between facilities, res-life and ABM — the company recently hired by Suffolk to maintain it’s buildings— as an interaction that manages student needs and student expectations.

“Res-life is responsible for handling the student interaction side, the students go to Resident Assistants or Resident Directors (RD) who have access to our work order system and they submit them like the rest of the community can,” said Lindsey.

According to Lindsey, facilities and res-life should seek to understand students’ difficulties in their relationship with maintenance by identifying where work requests are “dying.”

“I’m very interested in fixing whatever problems students have, and I want to work my way through the chain and figure out how we can better understand the student experience to make it better going forward,” said Lindsey. “I wouldn’t call them complaints because they’re experiences, they’re good and bad and I want to know about both.”

Residents have said that they do not know where to bring their complaints, or what different departments can do to solve the problems they are having in the dorms.

Both the res-life and facilities departments highlighted a need for more communication in order to ensure they are addressing student needs, which Lindsey said has begun with bi-weekly res-life liaison between the departments and SUPD.

These changes come at a time of transition for the facilities department, as Lindsey only entered her position in the last 12 months, and the partnership with ABM occurred within the same time frame.

“I think facilities has been on this learning curve with us as well with getting to know the building,” said the Resident Director of the 1047 Commonwealth Residence Hall, Brianna Burk. “There have certainly been some structural things that have brought on a few facilities concerns that we weren’t prepared for at the beginning of the year, so they’ve also had to learn and become creative with us when it comes to addressing these things.”