In an emotional rollercoaster of heartache, loss and forging of new relationships, filmmaker Felicia Lowe conveys the trials and tribulations of her journey to discovering her mother’s past and the extent of the toll of the Chinese Exclusion Act had on her family.

The screening of this film was hosted by the Communication and Journalism department, the History department and the Rosenberg Institute of East Asian Studies.

The film was shown during Professor Mickey Lee’s Research Methods in Communication class. Lee initially held the event for her class with a screening of the movie last Monday, followed by a Skype interview with Lowe on Wednesday.

“A Suffolk alum decided he wanted to set up an institute to bring speakers, filmmakers, like Felicia, to campus,” said Lee in a recent interview with The Suffolk Journal regarding the event being open to the public thanks to Suffolk University’s Rosenberg Institute of East Asian Studies.

The film follows four Chinese women and their relationship to each other regarding family history. Lowe, a former journalist, reveals in her film how she came to know an entirely new side of her mother through her own daughter. In the film, Lowe explains how her mother was secretive about her past and would not consider her own daughter privy to such information. Lowe’s daughter, Alana had been assigned to find an old family photograph and inquire about the origin of it. After finding a picture of her grandmother and asking why it was originally taken, it was then that Lowe and her daughter caught a glimpse into their mother’s otherwise cloudy past.

“Like chinese couplets, each verse distinct, yet related. Together they can tell a story, like mothers and daughters,” said Lowe in her film.

In a well-constructed presentation, Lowe was able to convey the tense situation that revolved around the Chinese Exclusion Act of 1882 where Chinese immigrants were barred from entering the United States. Through careful investigation and research, Lowe discovered that her mother had been informally adopted into a Chinese family who had Hawaiian citizenship and recently suffered from the loss of their own daughter. Lowe’s grandmother asked the family to take her daughter in as a replacement, so that she would be able to start a new and potentially prosperous life in the U.S.

Through careful deceit and tedious loopholes in the American government system, Lowe’s mother was able to successfully arrive on the mainland of the U.S. and be reunited with her long lost sister who had married into a family who had obtained American citizenship. With this glimpse into the past, Lowe is able to offer her audiences a snapshot of what it was like to suffer through a terrifying and lonesome time.

Professor Lee remarked on how she was able to meet with Lowe last year to discuss the film screening, only to discover that both Lowe and Lee’s mother hail from the same town in China.

The pair have remained in contact since their initial meeting and Lee said how she thought Lowe was “very brutally honest.”

In a Skype Question and Answer session with Lee’s class, Lowe reflected on some of her creative decisions regarding the editing process of her film, as well as her personal take-away from the final product.

“My story is personal, but at the same time represents thousands of other people’s stories,” said Lowe.

She remarked on the similarities between the current immigration status in the U.S. to the Chinese Exclusion Act of 1882, and said how she believes her film gave some insight on what it’s like to be on the inside of the alienation and discrimination.

“We have a bit more compassion for the past,” she said. 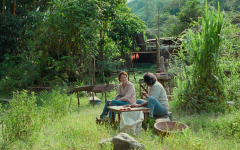 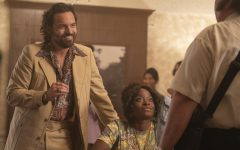 ‘Minx’ nearly misses the mark, Jake Johnson’s got it covered