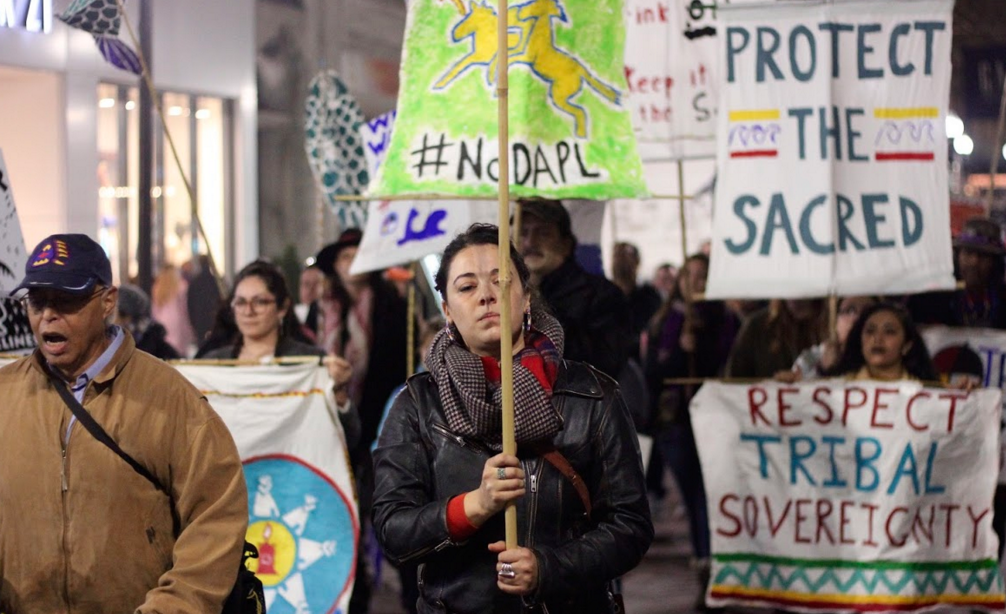 More than 1,000 people came together on the Boston Common on Wednesday to protest the construction of the Dakota Access Pipeline (DAPL). This $3.78 billion pipeline would transport fracked crude oil from the Bakken Shale in North Dakota to Patoka, Illinois, and would be more than 1,100 miles long, according to the DAPL official website.

The Boston ralliers came together to stand in solidarity with the protests occurring in North Dakota. The rally began with a prayer that was asked to not be recorded. Several of the event organizers spoke to the crowd about their experiences protesting in Standing Rock.

“They are standing peacefully and prayerfully to protect their ancestral lands, sacred sites, and the water of millions of people against the construction of the Dakota Access Pipeline, which is transporting crude shale from the Bakken oil field,” said Karan Doczi, the lead organizer of the event in an interview with The Suffolk Journal.

The protesters marched through Downtown Crossing, making a stop at TD bank on Winter Street, one of the banks investing in the pipeline.

“We’re hoping to stop by these big banks that are funding the pipeline and get attention and bring awareness,” said assistant organizer Jennifer Minor in an interview with The Suffolk Journal.

The protesters then marched through Boston Common to the Charles River banging drums and chanting, “You can’t drink oil, leave it in the soil.”

At the Charles, Here protesters formed a circle and sent prayers to North Dakota in solidarity. To close off the protest, a round dance was held in which Native Americans and protesters alike came together in a large circle and chanted while walking clockwise around the circle.

“Just because it is not affecting us necessarily right here, right now, doesn’t mean it’s not affecting everyone,” said Suffolk University student Ellie Brind’Amour. “And the second one of us starts to make a change, regardless of whether we are in the area where the change needs to take place, it can start a huge effect that will help people all over.”

Brind’Amour came to the protest with a group of friends who also participated in an earlier rally protest earlier that day against the outcome of the 2016 election.

“We found out about this protest and thought it was best to make sure we came out to it,” said Brind’Amour in an interview with the Journal.

The pipeline is being constructed by Energy Transfer Crude Oil Company according to the DAPL website.

Protesters in North Dakota argue its construction will put water for millions of people at risk as it runs beneath the Missouri River. The discharge of fill materials into the river from the construction would make their source of drinking water in danger. The pipeline also runs through sacred lands of the Standing Rock Sioux Tribe.

According to their website, “Since pipelines are statistically the safest and most reliable mode of transporting crude, DAPL will improve safety to the public and environment and free up rail capacity for the transportation of crops and other commodities currently constrained by crude oil cargos.”

In July, the Standing Rock Sioux Tribe filed a complaint for declaratory and injunctive relief against the U.S. Army Corps of Engineers.