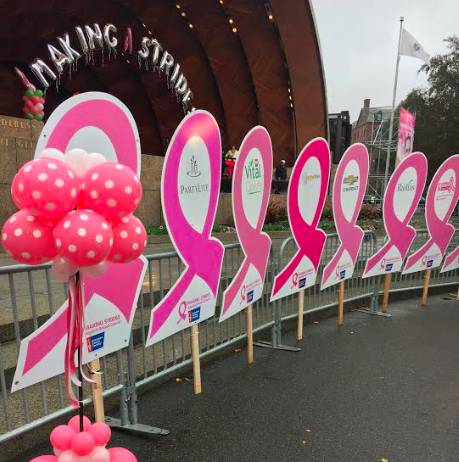 Nearly 40,000 supporters and survivors participated in the 24th annual fundraiser at the Hatch Shell in Boston. Theresa Freeman, who works in the media relations department for ACS, said that she expected to have raised 2.5 million dollars by the end of the season in an interview with The Suffolk Journal on the day of the event. The ACS not only funds research, but has also funded transportation, lodging and cosmetology services to those undergoing cancer treatment.

This was the first Making Strides fundraiser that Freeman has worked on. She said that this fundraiser was particularly special because the American Cancer Society supports all forms of cancer.

“Everyone has their own personal journey with cancer,” Freeman said. “We all come together so nobody walks alone.”

Suffolk’s oldest sorority, Theta Phi Alpha, showed their support on Sunday. Senior and Vice President Brianna Silva said Theta Phi Alpha makes sure to take part in Making Strides every year, as it is their biggest philanthropic event of the fall semester. Each of the sisters has had their own experience with cancer.

Silva’s mother survived a rare form of breast cancer in 2006. Kaila Mallard, the secretary, and Briana D’amelio, a sophomore, both have had cancer in their families.

“Every single person can relate to it,” said Mallard. Theta Phi Alpha recently held a fundraiser for Making Strides at Fajitas and Ritas, and 20 percent of each bill was donated.

Silva said that the best thing to do when a loved one is going through treatment it to “just be there,” she said. “You never know if what you’re doing is good enough, because at the end of the day, you’re not a doctor.”

Despite the cold and rainy weather, the positive attitudes of the participants shined through. Hundreds of students from high schools all across the state turned out, ready to walk and show their support, including a group of young men who went with their fellow classmates from Catholic Memorial High School West Roxbury.

Colin Droney, a senior, said that his father had prostate cancer, and after seeing that “it’s only that natural thing to want to help others, there’s a lot of people willing to help.”

“Look to the community for support,” said Droney. “There’s such a big community here to support anyone going through the stages of cancer, it’s easy to look for community strength.”

Among the crowd there were hundreds of foundations that had been started by family members in memory or in support of their loved ones who have battled cancer. James  of Revere had walked with his brother and more than 20 others who are involved in a small foundation called Bosom Babes,a team that participates in the walk every year. ’s mother is a two-time survivor and his grandmother passed away from breast cancer. The team has walked in Making Strides for more than a decade and recently had a softball tournament that raised 5,000 dollars for Bosom Babes.

James said the best way to raise awareness is to “get out and walk, it means something.”

A survivor for 15 years said that Making Strides gives her continuous hope. She said that she wants everyone who is battling breast cancer to “hang in there and keep fighting.”

“You have to stay strong for them,” said D’amelio, when talking about how you can support loved ones going through treatment, “they’ll keep fighting if they see that you’re there for them.

Making Strides put things into perspective for the sisters. “What we do is such a little thing, but it’s part of something much bigger than us, Silva explained, “it makes you grateful for your life and what you have.”