McKenna let go by Board, new president named from within

The Suffolk University Board of Trustees voted on Thursday to part ways with now former President Margaret McKenna and to have Provost Marisa Kelly fill as acting president.

Chairman Robert Lamb sent an email to the Suffolk community on Thursday evening informing them on the decision of parting ways with McKenna without giving any reason.

McKenna issued her own statement to the Boston Globe early Friday morning and identified the three reasons she was given for the termination.

“There were three reasons given for the termination for cause: Inadequate communication regarding NEASC to the board; providing certain information to NEASC, including the letter written by the Faculty Senate; and my participation in a meeting with the Boston Globe editorial board after the Feb. 5th agreement was announced,” said McKenna. “I believe this termination is unfair and, in pursuit of the truth, I plan to pursue a mediation process.”

Student Government Association President Sean Walsh sent a statement to The Journal Friday morning expressing his disappointment in the lack of communication from the Board to the rest of the student body.

“The Student Government Association is aware of the situation and is actively searching for more information on this serious matter,” said Walsh.

Senior broadcast journalism major Matt Durkin expressed his frustration with the Board in an interview with The Journal late Thursday night.

“[There is] no communication,” said Durkin regarding the Board to the rest of the Suffolk community.

Former SGA president Colin Loiselle believes that the lack of communication that the Board is exercising on their decisions and actions until after they’re already decided is making the Board go back to their habits during Loiselle’s reign.

“Part of the work we did last year was trying to get them [the Board] to communicate,” said Loiselle. “We were told they would be communicating more frequently and we would work together. Without sharing the reasoning or logic, it appears the board has gone back to business as usual.”

The meeting was organized in order to discuss the results of the investigation into the accusations that McKenna had mistreated staff members and spent university money on personal items and vacations, according to an article by the Boston Globe. These allegations were first exercised by the university’s former public relations executive, George Regan, who has also threatened the university to sue as McKenna decided to sever ties between Suffolk and Regan Communications back in February.

Regan commended the Board on Thursday in a statement to the Globe.

“The board of trustees showed great courage by standing up and recognizing the tremendous mistake that they made by hiring Margaret McKenna,” said Regan.

Loiselle criticized Regan’s comments in an interview with The Journal late Thursday night.

“George Regan should find a better way to use his time then meddle in the affairs of a client that fired him,” said Loiselle. “His accusation are baseless and I reaffirm my support for the termination of his relationship with Suffolk.”

The results had come from attorney Dan Goldberg, who was hired by the Board in order to investigate the allegations, according to the Globe.

In the email that was sent to the Suffolk community, the Board named Provost Marisa Kelly to serve as interim as well as the sixth president, including interims, in as many years. Chairman Lamb claimed in the email that when he took the position in May, he knew that choosing a new president would be an “early and critical assignment” but he said that the Board thanked McKenna for her service.

Several sources told Journal reporters that McKenna was seen escorted out of the Board meeting and 73 Tremont by police after the results of the vote were announced.

The emergency Board meeting occurred for more than four hours at Goldberg’s law offices, Morgan, Lewis & Bockius, according to the Globe. Goldberg’s results were put together from interviews with Board members and an analysis of emails and other documents that had belonged to McKenna.

McKenna outlined in her statement to the Globe that because of the demand letter that Regan sent to the Board with a list of allegations, the Board had authorized this costly investigation but found “no evidence,” according to McKenna.

“During today’s meeting, there was no mention of substantive findings relating to Regan’s allegations,” said McKenna in the statement.

Walsh expressed his concern that the Board did not address the questions that students have for the reasoning behind removing McKenna in the statement that was sent out Thursday evening.

“Students, as well as faculty, staff and alumni of Suffolk University deserve answers from the Board in a timely manner,” said Walsh. “It is of the utmost importance that the Board is transparent and forthcoming about the terms of President McKenna’s departure and the steps that they are taking to create a stable campus environment.”

Lamb announced that the Board is initiating the planned search for a new president led by John Brooks, a trustee since 2011. According to Lamb, Brooks had participated in several nonprofit and for-profit organizations’ search for presidents in the past.

This vote from the Board comes earlier than expected as the agreement that was decided in February had been that McKenna would step down by the fall of 2017.

The feud between McKenna and the Board had started in late January when former chairman Andrew Meyer and several trustees tried to force McKenna out and replace her with former state attorney general Martha Coakley. During that time, trustees accused McKenna of unauthorised spending and criticized her manner.

The accusations had backfired against the trustees when students and staff of Suffolk rallied around McKenna and demanded that Meyer step down. The hastags #SUStandsWithMcKenna, #FireMeyer and #WeAreSuffolk went viral across the globe, according to a previous article by The Journal.

“I came to Suffolk University with an open heart and a plan for reform,” said McKenna in the statement. “I fought a good fight against entrenched interests and a board that did not understand university governance, as evidenced by a revolving door of now six Presidents in as many years.”

As Kelly takes the reins as interim president of the university, despite the instability, SGA is ready to work alongside her.

Walsh emphasized that Suffolk has seen far too much turnover in the Office of the President in the last six years.
“It is crucial for Suffolk to begin an era of stability at president as soon as possible, so that the university can move forward with a clear plan and direction in the years ahead,” said Walsh. “I will fight to make sure that students are adequately represented on the search committee that will be convened for what will hopefully be Suffolk’s president for many years to come.”

One Response to “McKenna let go by Board, new president named from within” 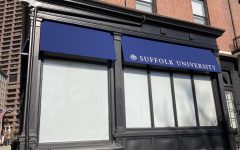