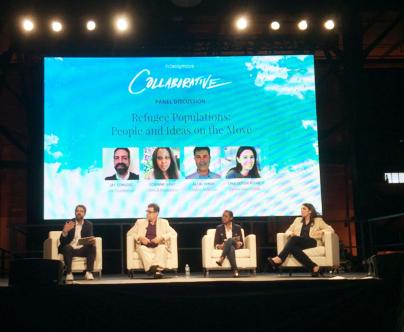 For more than the past six years, Lina Sergie Attar has seen her home almost completely destroyed.

On Tuesday, the Collaborative conference, hosted by Classy at Cruiseport Boston for a three-day event, a panel of four entrepreneurs took the main stage and discussed refugee populations and people on the move. The panel consisted of Jay Corless of the United Nations Foundation, Corinne Gray from the United Nations High Commissioner for Refugees (UNHCR) Innovation, Ali Al Jundi of Oxfam America and Lina Sergie Attar from the Karam Foundation.

During the hour-long dialogue, the four panelists brought to light how social innovation and entrepreneurs can aid efforts to Syrian refugees- home and abroad.

For Attar, the discussion hit close to home.

She originally lived in Aleppo, Syria before residing in Chicago, and said at some point Syrians will want to return home.

Founded in 2007 in Chicago, Karam Foundation and Attar’s efforts have extended their work outside of Chicago to provide humanitarian aid to Syria such as offering innovative education programs for Syrian refugee youth and to provide a better future for those families. They also extend their services to aid Syrian families across Turkey, Lebanon and Jordan.

“Our goal is to build a better Syria- despite the despair,” said Attar.

Jundi briefly reflected on his personal experience in Syria before leaving the country in 2012. Jundi has partnered with transportation officials to provide the latest updates on routes for Syrian families to utilize while migrating.

In addition, he extended his efforts to Jordan by improving the water management.

“We connect the people with the private sector in Jordan,” said Jundi.

Gray and UNHCR have also worked alongside private, entrepreneur and social sectors to create solutions for challenges Syrian refugees face. With the help of Google, UNHCR have provided translator applications for refugees on the move.

“This is where partnerships and collaboration come into play,” said Gray. “For each of the challenges that we have, there is probably an entrepreneur or social sector that have the solution. We need to find that solution that already exists and adapt it.”

Besides their efforts to eliminate the language barrier Syrians face migrating and settling in a new country, Gray shared that UNHCR partnered with the IKEA Foundation to design, provide and build better shelters for the refugees.

For Gray, who sees statistics for refugees at her desk job, she encouraged the audience to remember that there are human lives behind the numbers.

“Loss of human capital will impact future generations,” said Gray. “You have a massive crisis. Behind those numbers, you have a human being, with a family and a job.”

During her time at UNHCR, she said she focuses specifically on the issues that any human would face, including education, conflict and access to information.

“What people don’t realize is that these Syrian refugees are normal people with a job and skills,” said Gray. “And these people are creating a new society from scratch.”

At the end of the panel, Corless, who encouraged the young professionals in the audience to collaborate with one another to find solutions for displaced people, said he never did it for the money.

“You’re probably not in this to be a billionaire,” said Corless. “You cannot do it alone. You will never be able to do it alone. But we want institutions opening up and working in new ways.”

He explained that as there is a clear barrier, he is a “yes, you can” type of person.

“I’m a cheerleader,” said Corless. “I look for people who want to change the world.” 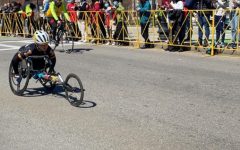