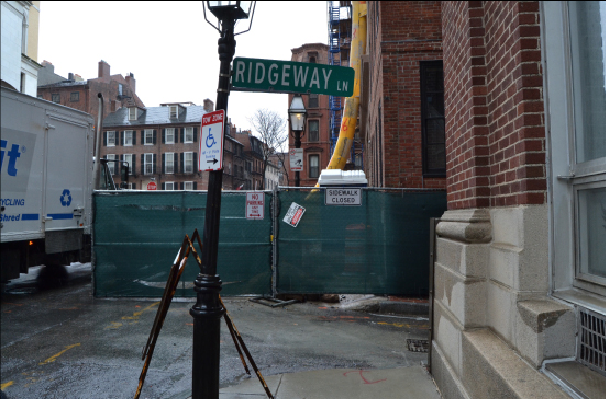 Suffolk University’s longtime Temple Street properties, sold in July, are now being processed for a conversion into 75 residential condos. This construction has already begun on the neighboring Fenton building, sold in 2014.

The Boston Herald recently reported that the development of the buildings has been taken over by JDMD Owner LLC, a Dedham-based affiliate of Center Court Properties. Construction is imminent, prompting the recent permitting process by the developers.

“The Fenton building is already being converted into condos and is almost done with construction. Donahue is going through the permitting process with the city of Boston,” said Senior Vice President of External Affairs John Nucci. He said the university has no ties with the development plans.

According to the Herald, the condos will include two penthouse levels with one-to-four-bedroom units. Underground parking with 60 allotted spaces is also in the works.

The buildings have been used academically by Suffolk University since Archer was built as the original Law School in 1920. Now, the Beacon Hill street will be predominantly residential. According to Nucci, these developers have begun conversations with neighbors in Beacon Hill, preparing for construction to start when Suffolk’s lease ends in June.

“The only logical use for those buildings, given that they’re located on a residential street, would seem to be housing,” said Nucci. “I’d be surprised if the Beacon Hill neighborhood would accept anything other than residential housing on that side.”

Nucci, a Suffolk alum and former Suffolk professor himself, took classes and worked in the buildings and said the transformation could foster some nostalgia.

“The reality is that they were substandard facilities,” he said. “The science labs were from an entirely different age, and it was a liability in terms of attracting students to the university.”

The Herald reported that the developers have “plans to restore and maintain the architectural character of the Archer building.”

The shift of Temple Street to a residential area comes as a change to surrounding businesses and city properties. Although Suffolk has no plans as of yet to shut down or replace the Ridgeway building on Cambridge Street, it is a fair expectation that student foot traffic on Beacon Hill will slow down considerably.

Legal Counsel at the Massachusetts State House Thomas Statuto, who received undergrad and master’s degrees from Suffolk in 2010 and 2011, respectively, understands the university’s reasons for selling the buildings but said the loss of Beacon Hill will affect the institution’s character.

“I can see why the school’s doing it, logically; I understand they had to do it for financial reasons,” he said. “I think it could potentially affect enrollment in that it loses its downtown appeal with a college campus. Beacon Hill was its campus before.”

Statuto alluded to the way that a decrease of student activity on Beacon Hill could hurt local businesses, speculating on the recently-closed Derne Street Deli, which neighbors Donahue and Archer, was a popular spot for students.

Some real estate changes throughout the Suffolk campus are quickly advancing, while others are at a standstill. According to Nucci, there is still no plan for a replacement of C. Walsh Theater.