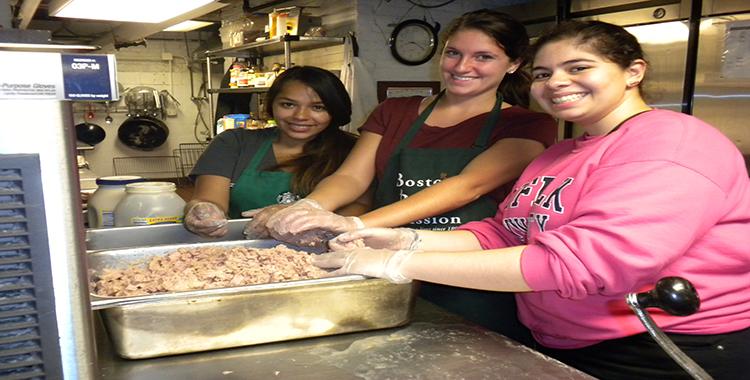 A tragedy in her family drove her to want to volunteer and help other people. Mauricia had researched the Boston Rescue Mission and decided that this was the place that she wanted to volunteer. She explained how she was not just the only one making a difference in her life. The people she brings food to have changed her life. “They are regular people,” she stated, “everyone has their own story.”

Volunteers come from businesses, churches, and schools in the area. Some organizations make their own sandwiches and bring them to pass out; otherwise they make the sandwiches at the Boston Rescue Mission, located at 39 Kingston St. They usually make whatever is given, but this past Saturday they made tuna sandwiches with tuna that was donated. The tuna sandwiches were either on white or wheat bread with cheese on top. The 15 volunteers made the sandwiches and passed them out in the Boston Common along with a pastry, a bowl of soup, and water or coffee. People coming through the lines were allowed a maximum of three times. They were only allowed one sandwich, one pastry, one bowl of soup, and one item to drink each time. The people who came through were enthusiastic and happy for the food. The pastries, soup, and coffee were the most popular items.

Rachel Gresser, a senior at Suffolk University said, “I wanted to help out because I feel that people are given opportunities to thrive through the Boston Rescue Mission. People do not realize how many homeless are out there. I feel better when I’m volunteering, and I hope others will step up and help their community as well.” Gresser came and volunteered this past Saturday. She explained how she has been working here for a little over a year and that it is one of the most humbling experiences she has ever had. She started volunteering here because she was required to do 60 hours of community service for a psychology class. Gresser completed her hours and still is continuing to help out today, and encourages others to do so as well.