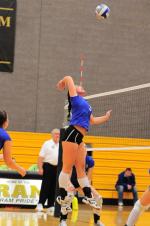 Suffolk University’s Women’s Volleyball team saw their Saturday, September 15 game against Salem State as a way to recover from last week’s detrimental loss to Daniel Webster College. With home advantage looming over their head they were “desperate” for a win, according to Senior Captain Hannah Davis.

Suffolk was headed off to a rough start when Salem took the first set, but it was then that the girls knew what they had to do. They had to take the loss to Daniel Webster and use it as ammunition to beat Salem State. They banded together as a team and pushed as hard as their bodies, skills and strategic planning allowed them to make sure they got to 25 first. After losing the first game the girls got together, brought their energy level up and “played together” using Salem’s weaknesses against them.

“We started swinging at the ball instead of lightly tipping it over,” said Davis, referencing a strategic move they first observed in their first loss and used to their benefit when it was time to make a comeback.

Throughout the first two games the girls became aware of the holes in Salem State’s line up, which they communicated to one another. Davis noticed that the rallies were going on for longer periods of time, and the six girls worked twice as hard, if not harder, to make sure the ball wouldn’t drop on their side of the court. Davis also thinks that the team’s chemistry is what aided them in the Salem win.

Sarah Arbogast, junior middle blocker, Torrie Brillaud, sophomore outside, Hannah Davis, middle senior, Hailey Atkinson, outside junior, and Erica Begin, right side junior, all worked together to get the strong hits that tore through Salem State’s defense, as much as they played good defense when the time came.

After their first game loss, Suffolk University’s Women’s Volleyball team took the next three sets in a row in order to claim their victory of Salem State. Davis says, “If we eliminate our own errors and get out of our own heads and continue to encourage each other we will be a definite competitor to enter the tournament.” The girls look forward to moving on in the tournament and promise they will be practicing every day to keep up the communication, strategic planning, and most importantly their chemistry.