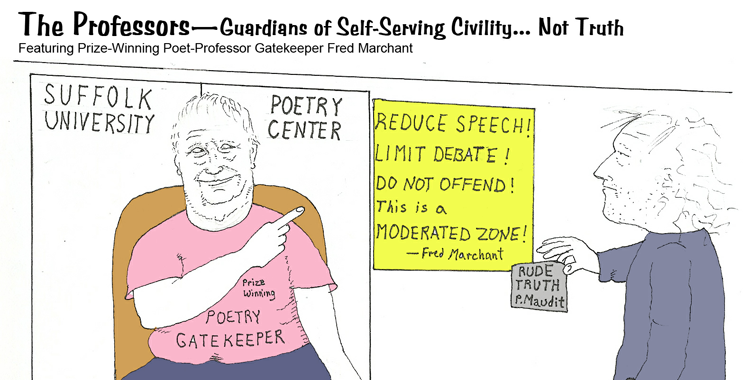 G. Tod Slone, editor of the biannual journal The American Dissident, has a problem with Suffolk University’s Poetry Center and its director, Professor Fred Marchant. In an open letter and a political cartoon sent to the school’s English department faculty and The Suffolk Journal, Slone depicts Marchant as a free-speech-oppressing gatekeeper who wants to censor outsider thoughts.

In his letter, Slone writes, “Suffolk University Poetry Center, which Marchant created, rejected my request that it consider subscribing to The American Dissident, a nonprofit journal of literature, democracy, and dissidence.” He adds that Marchant also “rejected the thought of inviting me to the Center and/or his Creative Writing classes.”

Marchant was totally surprised upon receiving Slone’s letter and seeing himself depicted in the cartoon. “It came out of the blue,” he said. “I vaguely remember getting a request” for an invitation to the Poetry Center from Slone, Marchant said. The Poetry Center receives at least one request, if not more, per week from writers who wish to use the space, according to Marchant. “When I get a request, I first look at the writing” of the individual, he said. “I don’t know of his poetry, if there is any.”

After reading through Slone’s blog, Marchant made his decision not to invite him to speak. “The Poetry Center is about showcasing literature, not about argumentation,” he said, “My responsibility to the community is to make a judgment on whether a speaker merits [the Poetry Center’s] time and limited resources,” he said, “and his work doesn’t merit our time.” For this, “[Slone] calls me gatekeeper. I say no—I must make judgments.”

In his letter, Slone criticizes the ‘literary machine’ for “ostracizing the few of those who dare go against the grain.” He believes that decision makers like Marchant attempt to “reduce speech” and “limit debate.” He calls on Marchant’s colleagues to “manifest unusual curiosity and openness, normally absent in the minds of most university professors of literature and creative writing” in their classrooms.

“Might there be ONE of you, yes just ONE of you, who might actually be a proponent of vigorous debate and freedom of speech, cornerstones of a thriving democracy? If so, please DARE to comment,” Slone wrote at the beginning of his letter. He notes later, “not one of the professors contacted deigned to respond.”

On The American Dissident’s blog, Slone has posted many cartoons of academics he sees as oppressors to freedom of speech and curates a list of well-known literary and academic organizations that he dubs ‘democracy-adverse organizations’ “as tested by the editor.”

“Slone may have a grudge against an organization,” Marchant said, “but denying a request doesn’t make an organization ‘democracy-adverse,’ these claims are deeply inaccurate and disqualify him as a speaker for us.”

As Marchant scrolled through the organizations listed, he was baffled to see Pen New England among them. Pen, which has chapters all around the world, was originally founded during the Cold War to help imprisoned writers express their ideas. Their core ideal is to preserve the freedom to write. Marchant is a former chairman of Pen New England.

“We believe in free speech,” Marchant said, “Slone’s speech is not censored, he has a platform to say what he wishes on his blog.” Marchant stresses that he does not want to get into an argument with Slone over this and “takes no glee” in denying his request.

“I respect him and his efforts,” Marchant said, “If it weren’t all in that one argumentative note, it would be a good debate to have about the sociological dimensions of literature, like the status of publishing today or the meaning of creative writing at schools.”

“He has a point of view, and I’m glad he brings it out to the world,” Marchant said, “It’s just not exactly what we discuss at the Poetry Center.”