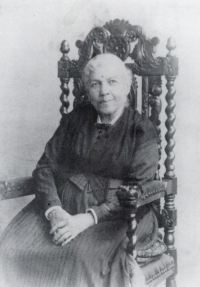 It is well known that Boston was home to abolitionism for one hundred years before slavery was abolished in the United States.  Those sentiments were returned to the city Friday night when The Underground Railway Theater presented a reading from a new play at the C. Walsh Theater at Suffolk University.  The play is an adaptation by Lydia R. Diamond of Harriet Jacobs’ 1861 autobiography, Incidents in the Life of a Slave Girl. Kenneth Greenberg, a historian from Suffolk University College of Arts and Sciences began the reading with a brief introduction.  Greenberg began by asking for a show of hands of how many audience members were historians.  While a number of historians from colleges across Boston were present, the roll-call indicated that most of the audience members were people simply fascinated by the subject.

Mr. Greenberg explained that Boston and Cambridge were the heart of abolitionism in the United States prior to the Civil War.  “You’re sitting just a few feet away from the center stage,” he remarked, referring to Beacon Hill.  Immediately after the speech, the play opened with eight African American actors walking onto the stage, humming a light chant.  The actors were not dressed in costumes, nor did they physically act out the scenes, but their words struck a chord in the audience.

As they read aloud passages from the play, the narrator forced the audience to use their imaginations.

Young Harriet, played by Kami Smith, is a fifteen-year-old slave who is outspoken, tenacious, and has a mind of her own.  She is particularly close to her grandmother, who is played by Monica Ellis.  Smith is a free woman, who runs a store in the “Deep South.”  Harriet is warned about sex and violence that is forced upon slave girls by their masters.  In spite of Smith’s warnings, young Harriet falls victim to her master and becomes pregnant. She decides to run away for the well-being of her child and lived in a narrow crawlspace attic for seven years.

While the passages moved the audience, it proved impossible to truly depict the hardships these people endured.  Perhaps the most memorable line of the play was, “living the life of chattel is indescribable,” which described how completely hopeless Harriet’s life must have seemed.  There were no laws to protect these young women from the abuse of their masters, leaving them no option but to endure the abuse.  The performance was presented to an audience of diverse backgrounds, showing that Harriet’s story is universal.