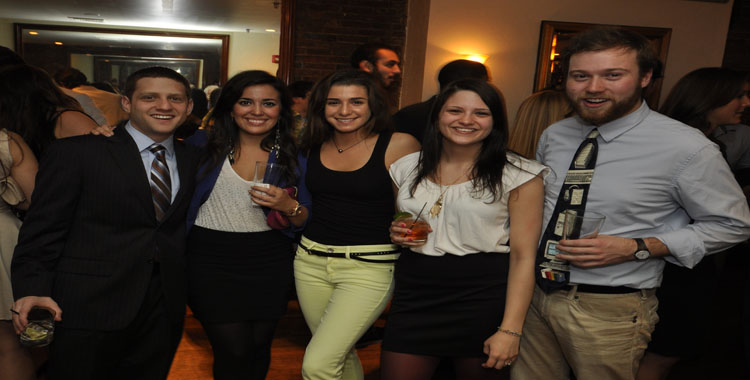 After last month’s call for submissions to the fifth annual Rammy Awards garnered over 150 entries to be considered in 11 different categories, students and faculty flocked to the ceremony at the Modern Theater last Thursday night to see who would win each of the honors for their work in visual communication.

The night featured work from students ranging from music videos to photography to documentary reporting. It seemed the entire Communication and Journalism (CJN) department faculty and staff, along with College of Arts and Sciences (CAS) Dean Ken Greenberg and President James McCarthy, attended the night to revere students’ work as professors and alumni guests presented the awards.

The nominees and winners were chosen by panels of judges made up of experts in each award category. The judges gave positive feedback on students’ work, and were overall impressed with their “technical skills and ability to tell a story,” according to award ceremony host Professor Dana Rosengard.

“Changing Fate,” a documentary detailing one man’s struggle to lose weight, won best in-depth/documentary reporting.
In the category of best hard news reporting, Adam Scheinthal and Katherine Sampson won for their piece, “Occupy Boston Students,” that explored why students participated in the movement.

Katie Sampson won best feature news reporting for “SU alum for Japan relief,” a piece that told the story of a NESAD graduate who made and sold unique, handmade bracelets from his apartment to aid the relief effort in the wake of Japan’s tsunami.

Suffolk in the City, which features Suffolk student reporters on The Morning Show on New England Cable News (NECN), is one of the only programs in the country that allows students to appear live on a local news station on a weekly basis. The Associated Press (AP) also recently named Suffolk U News the best college news program in the country, as announced by Rosengard.

Sampson’s feature piece “SU alum for Japan Relief” was also honored as the best college feature news piece by the AP.
Best music video was awarded to Mason Marino and Nicholas Jones’ “My Mistake,” a haunting ballad featuring a girl being chased through the woods as she dreamt in bed.

Photography awards were divided into four categories: best black and white, best color, best spot news, and best photo essay. Leidy Restrepo’s “Aamnah,” a photo of a woman’s hands at a wedding ceremony won best black and white for its emotional appeal. Moss Lynch’s “Breath of Fresh Air” won best color shot for its bold colors and juxtaposition of a detailed flower and towering mountain. Jennifer Wong took the title for best spot news photo with her shot, “Drugs: All Ages,” which depicted a humorous sign at a rock club. James McMasters won best photo essay for his work documenting the streets of Italy on a Suffolk summer trip to Tuscania.

Along with the presentation of the awards, the ceremony also included performances by the Suffolk a cappella group, The Ramifications, and Dr. Vicki Karns singing with the help of Professor Allen Thomas’s piano accompaniment. Special guests, like Miss Boston, Kelsey Beck, and Suffolk alum channel 5 news reporter Cheryl Fiandaca, gave advice and praise to students as well.

After the ceremony, all attendees were invited to a free reception at Max and Dylan’s restaurant around the corner from the theater to mingle and enjoy food and drinks.