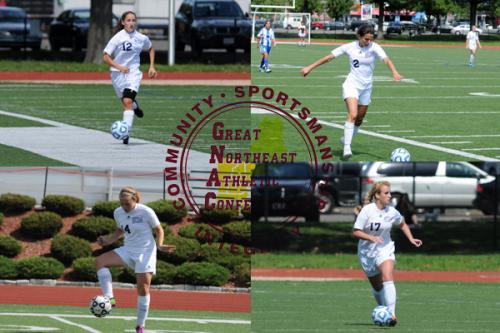 After rallying themselves into the playoffs with a 9-0-2 conference record in October and then to the Great Northeast Athletic Conference finals as the eighth seed in the tournament, the Suffolk University women’s soccer team was defeated by Lasell College by a score of 2-1.
Suffolk would find themselves down at halftime thanks to a 38th minute goal from Lasell freshman Bridgette Lynch. Considering the Lasers had six shots on Suffolk’s freshman goalie Melissa Brouillette in the first 15 minutes, it seemed only a matter of time before Lasell would drive one into the back of the net.
It would take until midway through the second half before another goal was scored in the game, coming on a pass from senior Leslie Hayden to sophomore Monica Wolf, who drove a strike into the Laser goal from 18 yards away.
Just four minutes later however, the Lady Rams would find themselves trailing once again due to a Jessica Taylor goal for Lasell. Suffolk would log 20 shots on goal against Laser goalkeeper Elizabeth Stickely, but were only able to record one goal. Both Taylor and Stickely would earn the honor of co-MVPs of the GNAC tournament.
It was a close bout all the way through to the end, with Hayden having a shot to tie the game for her team in the final 16 minutes of play, but her shot sailed wide of the goal in what would turn out to be Suffolk’s last true opportunity to even the score.
Unfortunately for Hayden and her senior teammates Lauren Cameron and Kristina Michael, their team was unable to come away with the conference championship but their efforts this season and throughout their careers have taken a program that should still be in its developing stages and turned them into a threat to bring home the conference title each season.
Hayden finishes her career with Suffolk as perhaps the most decorated player in program history and one of the most decorated in conference history. She holds the all-time record for goals scored and points scored in the GNAC and the single season goals record for Suffolk with 22 which she set this season.
It’s a disappointing end to the season for the Lady Rams who will certainly miss their three seniors next season, but if the last two years of play have proven anything it’s that this team has the young talent to continue to contend within their conference. 2010 Suffolk finished with the best record within the GNAC before losing in the first round of the tournament, while this season they turned their season around at just the right time and fought their way into the final game.
It will be interesting to see how the team responds with the absence of Cameron, Hayden and Michael next season, but on paper the team has the potential to make noise within the conference come next year.
Suffolk University women’s soccer senior Leslie Hayden was named Offensive Player of the Year for the 2011 season by the Great Northeast Athletic Conference (GNAC).
Hayden wrapped up an amazing career for the Rams as the all-time leading scorer in GNAC history with 176 career points. She scored 73 goals along with 30 assists in 66 career games.
Hayden also earned first-team All-Conference honors. Sophomores Garbielle Balestrier and Monica Wolf earned second team All-Conference selections. Sophomore Meghan McHale was a third team All-Conference selection as a midfielder.