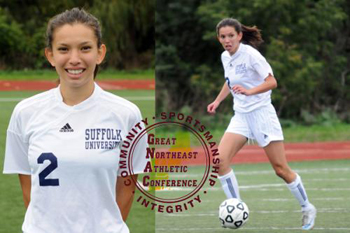 As Suffolk has been on the hunt to qualify for the Great Northeast Athletic Conference playoffs, their prolific offensive threat Leslie Hayden became the GNAC’s all-time leading goal scorer and also set the mark for goals scored in conference regular season games. As of now, Hayden has set the bar at 69 career goals with three games left in her senior season.
Hayden scored her 69th career goal in Suffolk’s 4-0 win over Norwich University on Saturday. The goal, which came on a penalty kick, broke the conference’s previous record set of 68 set by Patrice Merendina, who played for Johnson & Wales University from 1999-2002, according to gosuffolkrams.com.
Earlier in the game Hayden scored her 17th goal of the season and also her 41st career GNAC goal, exceeding the previous record of 40 set by Nicole Zielinski, who played for Simmons College from 2003-2006.
Thus far in 2011, Hayden is currently the GNAC’s leading goal scorer with 18 and her 40 points also leads the league. It is the third time in her career that Hayden has totaled over 40 points.
She has now scored 11 goals in the Rams past four games. In 60 career games played, Hayden’s 69 goals and 27 assists total 165 points. This ranks fifth best in GNAC history, while her 2.75 points per game total is currently the second best average among GNAC scorers ever.
Hayden has proved to be one of the best players throughout her four-year career at Suffolk as her offensive skills are unstoppable. She averages 1.1 goals per game and has scored nine hat tricks in her career, including three this season. She has also proven to be very clutch, as 12 of her 69 goals have proven to be the game-winning goal in Suffolk victories.
In 2008, as a freshman, she was tied for the GNAC lead with 17 goals, while her 37 points was the top total in the conference. During her sophomore season she scored 20 goals and she became just the eleventh person in conference history to accomplish this. As a sophomore she also scored six times in one Suffolk game, becoming the 1st player ever in Division-III history to achieve this.
As a junior Hayden set the GNAC single-season record for assists in league play with 14. She finished the season with 14 goals and 17 assists a total of 45 points, a career-high. She also helped lead the team to the best regular season record with a 12-2 mark.
On October 25, 2010 Hayden became just the eighth player in GNAC history to score 50 goals, doing so in just her 45th career contest played.
Hayden’s resume also includes being named a GNAC all-conference selection the past three seasons and she was also named to the All-Sportsmanship team during her freshman and sophomore season. In 2008 she was named GNAC Rookie of the Year. She has also served as team captain since her sophomore season.
When asked about his star player, Coach Ernst Cleophat explained that he’s “always trying to find the best words to describe her.”
“The first time I saw her play, I knew she was going to take this league by storm,” said Cleophat. “I knew she was going to be one of the best. She’s one of those players as an opposing coach that keeps your heart in your hands until the very end of the game. Hayden is a rare type of talent.”
Hayden doesn’t let the success get to her head though, as Cleophat describes her as incredibly humble.
“She doesn’t pay attention to her statistics, when she gets these awards and whatnot, she doesn’t know about it until I mention it to her,” said Cleophat. “She doesn’t take credit for the team’s success because she understands that this game is about teamwork.”