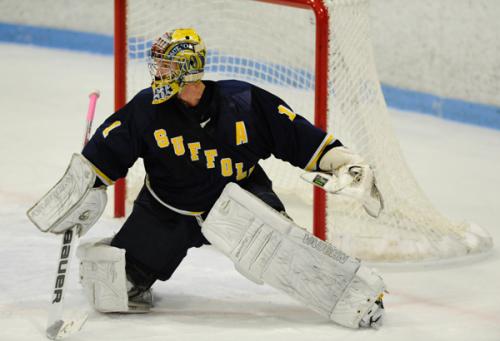 Just five months after graduating from Suffolk University, former starting Hockey goalie Jeff Rose has signed a professional contract with the Fayetteville Fireantz of the Southern Professional Hockey League.
Post-college life has been an interesting ride for the Suffolk alum, spending two months overseas in France playing against professional teams around the country and now resting up and training for when he reports to Fayetteville for camp on October 5th.
Rose explained that his time in France was an enjoyable experience in which he learned plenty about the game of hockey.
“The style of play over there is a lot different than here,” Rose said of his time playing on French soil. “There’s a [greater] focus on the technical skills where here there’s a much more physical style. Perhaps it was because we were playing pro teams, but the game seemed so much faster.”
The hockey experience is not the only thing the former Ram took away from his European trip, as he enjoyed the cultural experience as well.
“One of the coolest parts of the trip was seeing the sights of France,” the Connecticut native said. “We were able to see the cathedrals of Paris and we saw how champagne was made in Rennes. It was one of my favorite parts of the whole experience.”
As enjoyable as his time in Europe was, the goalie explained that he couldn’t see himself living in France and came back stateside in pursuit of making it in the United States, which lead to his contract with the Fireantz.
Though he hasn’t had much contact with his new team since signing, Rose is very much excited to report to camp in a little less than a month, but not before playing a few games in the AHL with the Connecticut Whale.
From September 25 through October 1, Rose will be skating with his hometown AHL team, who is the minor league affiliate of the NHL’s New York Rangers.
With time to reflect on his college life and gear up for his new endeavors, the 2011 graduate was asked about his time wearing the blue and gold for Suffolk.
“My favorite moment during my Suffolk career would have to be our playoff game against Wentworth where we went on the road and beat them,” Rose said. “Being my first year with the team, it made me optimistic about the years to follow.”
Those years would be more challenging than Rose expected after his freshmen year however, with the team failing to make the Great Northeast Athletic playoffs the previous three seasons. Despite the recent woes for his former team, this goalie believes that his former team has a good chance this season.
“They have a really good team right now,” Rose said. “Based on the amount of talent [they have], looking ahead things look very good. Last season we had a tough schedule and when you lose to really good teams it hurts your confidence, but this season all those games look winnable.”
Rose believes that if the Rams can get a few early wins, things will continue in the upward direction for this team.
The Fayetteville Fireantz open up their new season October 21st against the Louisiana IceGators in a game Rose hopes to be starting in goal for his new team.