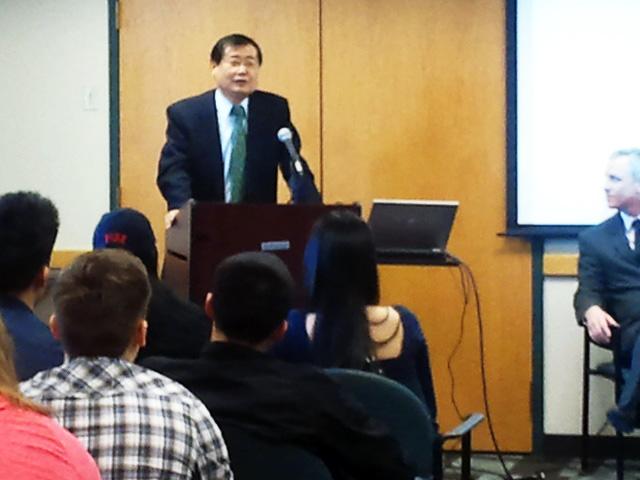 Suffolk students showed their support for Japan on April 5 in the opening ceremony for Stand for Japan, a Suffolk University relief effort presented by the Office of Diversity Services. The kickoff was part of Asian American Heritage Month, a four-week celebration of Asian culture and pride, and now because of the tragedy that struck Japan on March 11, April will be a month devoted to raising donations to aid the nation in need.

Three Suffolk students affected by the events in Japan spoke, including Ezra Polland, who was studying abroad and teaching English in central Tokyo when the earthquake struck. Although the tsunami did not hit central Tokyo, where he was living, the tremors from the earthquake were enough to cause panic and fear throughout the city.

Polland talked about how people began to run when buildings started swaying, including the one where he taught. He stayed – refusing to leave an 85-year-old woman who could not exit the building without assistance.

Polland left Japan March 16, but his heart is still there, as he emphasized just how much the Japanese people need our support, stating that “any support we give is going to be fully utilized in an organized manner.”

The ceremony began with an introduction by Craig Cullinane, associate director of Diversity Services. Next was a screening of an AP news broadcast presented by USAToday.com that spoke of the severity of the situation in Japan. We all know about the earthquake and subsequent tsunami that horribly affected the north-east region. We also know about the worries and uncertainties tied to the Fukushima nuclear power plant situation. But what we don’t know are exact numbers of people affected or how long it will take to rebuild the most hazardous areas.

After the news broadcast, Mr. Hisashi Nakatomi spoke about exactly what happened the day the earthquake and tsunami struck. Working as Deputy Consul General – Japanese Consulate, Mr. Nakatomi has been educating others about the gravity of Japan’s situation and the importance of international aid. The Japanese Consulate in Boston provides cultural resources, visa information, events calendar, and business information, with a list of Japan specialists in New England.

With 134 countries taking part in relief efforts, Mr. Nakatomi noted both his gratitude and the gratitude of the Japanese people, saying, “We appreciate the huge help and support of the United States” before mentioning the life-long friendship between the U.S. and Japan.

Following Mr. Nakatomi’s speech were words from the three Suffolk students, one of whom was Takako Ohyama, a Suffolk senior from the north-east region of Japan. She said she received word of an earthquake from a friend late at night while studying here in Boston. She said she wasn’t really worried at first since earthquakes are common where she’s from, but the following day she saw the news on TV and was shocked. She could not reach her parents or friends for a while but was finally able to establish contact a week after the quake.

“People are suffering, people are dying, and I can’t believe what is happening in my city,” Ohyama said. She spoke about so many people not knowing where to go because so many families have been displaced. After three weeks of rescue efforts, 15,000 people have yet to be found. “It’s hopeless for people who are missing.”

A friend back home told Ohyama to tell others that things are getting better as people receive more aid, a statement that has sparked some optimism. “Hopefully everything will be better,” Ohyama said. “I’m sure [of it], especially with all the donations.”

Following Takako’s words was Kei Goshima, a Suffolk grad student from Tokyo who has been actively working with Ohyama on the Suffolk Stand for Japan relief effort. Goshima noted how the quake was so vast that in Tokyo where her parents live, the piano in her house moved a significant distance. Trains were shut down, her friends had to walk eight miles to get home, but everyone was helping one another – opening their doors to strangers and giving free food to those traveling several miles by foot just to make it home.

“I just want to share nice stories of people helping each other,” Goshima concluded.

The ceremony ended with a video message from Tomo Honda, a Suffolk alum living in Japan and working for Fukushima Renaissance, an organization that is active in the Fukushima power plant disaster control. Honda too emphasized the importance and appreciation of donating:

“We are aware of, and we are grateful for all of the support from the international communities. Thank you Boston, and thank you Suffolk.”

The main event in the Suffolk relief efforts this month will be Stand for Japan, a fundraiser that will take place on the entire fourth floor of Donohue on April 14. All money for earthquake and tsunami relief will be sent to Japan through the Red Cross, Suffolk’s choice as the best organization to work with.

Although the opening ceremony for Stand for Japan occurred just yesterday, “Your kindness has already reached my heart,” Mr. Nakatomi said.