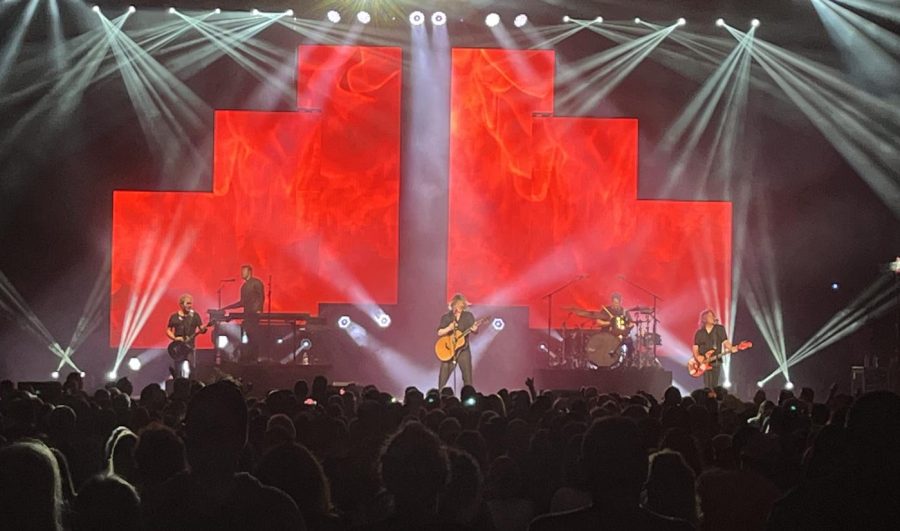 Multi-platinum rock band Goo Goo Dolls took on an energetic crowd on Aug. 16 as they checked the Seaport’s Leader Bank Pavilion off their list of national tour stops.

The tour, which kicked off in Utah on July 26, is the first full-length tour for the band since 2019. The band was originally set to play 24 shows, all of which were rescheduled from 2020 to 2021, and then finally 2022. They have since added more dates, and will play into November of this year.

Opener Blue October, a rock band from Houston, was full of spunk, energy and excitement as they took on the Boston audience.

The diversity of their setlist stretched from punk to folk music, and lead singer Dustin Furstenfeld knew just what to say to get the crowd excited. No matter the tempo or intensity, the band had people on their feet.

The vocals were clear and crisp, and the instrumental performances were such a high quality, one may think they were pre-recorded.

Multi-instrumentalist Ryan Delahoussaye was particularly ear catching, as he switched from guitar to violin to keyboard, and all the way back again. His added touch to the band, which was formed in 1995, was hard to miss, but easy to appreciate.

Goo Goo Dolls frontrunners John Rzeznik and Robby Takac took the stage just as darkness fell, which proved to be a great time for the band to show off the talent of their lighting directors, as well as the very cool graphics that played behind the band.

The band made great use of stage space, spreading Rzeznik and Takac out across the front, and dispersing the additional guitars, bass and drums along the back two thirds of the stage. Rock bands sometimes struggle with having to be stagnant due to instruments, but the Goo Goo Dolls made sure to occupy and command as much space as possible.

The band didn’t need to do much to connect with the crowd, within the first two songs and one single comment from Rzeznik, the crowd was riled up and ready for a great night.

The band’s newest album “Chaos In Bloom,” was released on August 12, only days before the Boston show. Even though the crowd wasn’t familiar with some of the new tracks, many stayed in their seats instead of taking the time for a bathroom break or to grab another beer, showing the dedication the fans have to their favorite rock band.

The audience proved their love over and over, screaming along to fan-favorite tracks such as “Slide” and “Sympathy.” A personal favorite, “Come to Me” from the band’s 2013 album “Magnetic” was just as amazing live as it was recorded, and showed the authenticity of the band through its use of acoustic instrumentals over intense electric guitars and synths.

Takac, decked out with bright pink hair and a smile that never left his face, was clearly thrilled to be back on stage in front of a crowd again. Rzeznik and Takac had a beautiful chemistry, interacting without words and showing their near 40-year long history on stage together.

The band did a wonderful job of mixing in songs both familiar and new, giving everyone a piece of the music they loved. They kept the audience intrigued with funny jokes and sentimental stories, and left them feeling as if this was a private show in a 5,000-person venue.

The band closed the main set with their chart-topping hit “Iris,” and the overall atmosphere of the arena was one of magnificence. The moment was magical, and hearing such a culturally-significant song live is an experience everyone should have.

The band’s brief moment off stage wasn’t enough to fool the audience, and they returned only a few minutes later to play a high-energy encore and finish their stay in Boston.

The band’s newest album is something very different from the iconic chart-topping hits, but was a wonderful addition to their award-nominated setlist. The Goo Goo Dolls have over 30 dates left to play on tour, and finish up in Texas later this year.