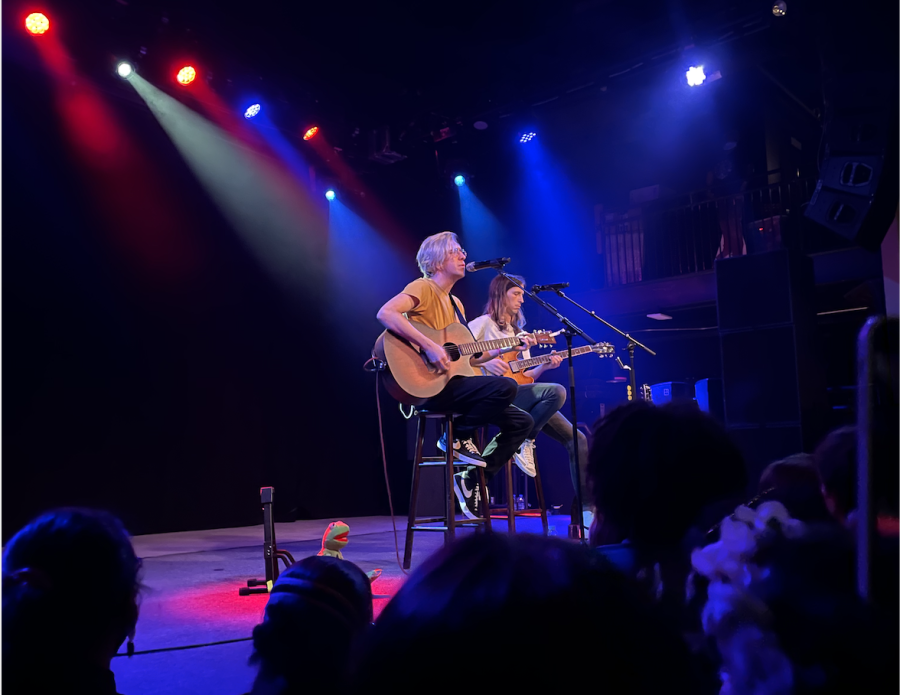 Ricky Montgomery and guitarist Kyle Moore play an acoustic set at The Sinclair on May 7.

Ricky Montgomery took on a passionate crowd on May 7 at The Sinclair in Cambridge, despite a production-wide battle with COVID-19.

Montgomery and crew made the difficult decision to cancel shows in Washington D.C. and New York City after one band member tested positive during the first week of May.

A second band member tested positive between the second cancellation and the Boston show, and Montgomery, along with guitarist Kyle Moore, performed a fully acoustic set for an audience of about 300. Boston was the first show back after the week-long hiatus.

Though many artists would be terrified to perform without a backtrack or full band, Montgomery handled the obstacle with grace and put on the most intimate concert The Sinclair has likely ever seen. Montgomery could have easily rescheduled the show and excused his choice with the help of the pandemic, but he made the daring decision to sit up on stage for an hour with only his guitar and Moore to back him up.

Not every artist would have the bravery to do what he did, as it could result in vocals being strained or facing disappointment from fans. Montgomery, however, pulled it off with both talent and finesse, giving fans what felt like a private show.

Montgomery opened with “Talk to You,” an upbeat track that showed off Montgmery’s soft, indie-pop side. A benefit of the acoustic show was how easy it was to hear the lyrics, and appreciate Montgomery’s knack for songwriting.

Surprisingly, Montgomery followed his opener with what many thought would be his final number, and is arguably his most well-known song thanks to the popular social media platform TikTok. The lyrics to “Line Without A Hook” were known inside out by the crowd, and fans sang along as both Montgomery and Moore strummed their guitars.

Fans seemed to know, however, that though the track is the most popular, it is not his best compared to the other options on the setlist.

Throughout the show, Montgomery quipped and joked with the audience, pulling them further into the intimacy of the show. One fan held up a poster with a crude drawing of a country with its flag colored inside, and Montgomery laughed and attempted to guess in between songs.

After a song or two, Montgomery guessed Latvia correctly.

Another fan asked Montgomery to hold up a pride flag, along with a plush toy of Kermit the Frog. Montgomery did so with open arms, and voiced his support for the LGBtQ+ community. Kermit remained onstage at Montgomery’s side for the remainder of the show, and it was delightful to see the artist so keen on making his fans happy.

Montgomery was humble with his vocals, clear talent escaping his lips with every bar. His voice was beautiful to hear, and even his “show off” moments of hitting high or longer notes felt pure and unforced. His set list gave him the opportunity to show off his impressive range, and the acoustic aspect allowed his talent to truly shine.

Montgomery slowed things down with “My Heart Is Buried In Venice,” a song about a fractured love affair. This was a clear fan favorite, and the stripped-down brought tears to various eyes. Themes of Montgomery’s childhood in California were seen throughout many of his songs as he pulled from his personal experiences.

Montgomery got serious with the number “Sorry for Me.” The lyrics of the song on their own held levels and layers equivalent to that of a classic novel, and the arrangement was beautifully done. Though it would have been lovely to hear drums and strings as heard on the recording of “Sorry for Me,” the simplicity made the emotions that much more intense, and the strictly-vocal outro was ethereal.

This track particularly showed Montgomery’s maturity as an artist, despite the teenage fans that made up most of the audience.

“Settle Down,” though more upbeat, held that same maturity in the lyricism, which is impressive for an artist so new to the pop culture stream. “Settle Down,” along with the song “Snow,” showed off a vocal tone reminiscent of Alex Gaskarth,  lead singer of pop-punk band All Time Low. A worthy comparison to such an established vocalist, Montgomery achieved this with little to no strain or intent on his part, and it was astounding to see such an effortless version of Gaskarth peek through on stage.

Montgomery finished the 50-minute set with another TikTok favorite, “Mr. Loverman.” Though wonderfully sung and arranged, it was a bittersweet ending to a beautiful set that was just a bit too short for my liking. Had Montgomery added in a cover or two of his favorite songs, it would have been just over an hour and full enough to satisfy everyone in the room.

Despite the challenges, Montgomery put on a once-in-a-lifetime show for everyone in that venue, and it was an honor to be a part of such an experience. Talented only scratches the surface of Montgomery’s potential, and hopefully he returns to Boston soon with his entire band to give the performance he intended, and show the city everything he is capable of.