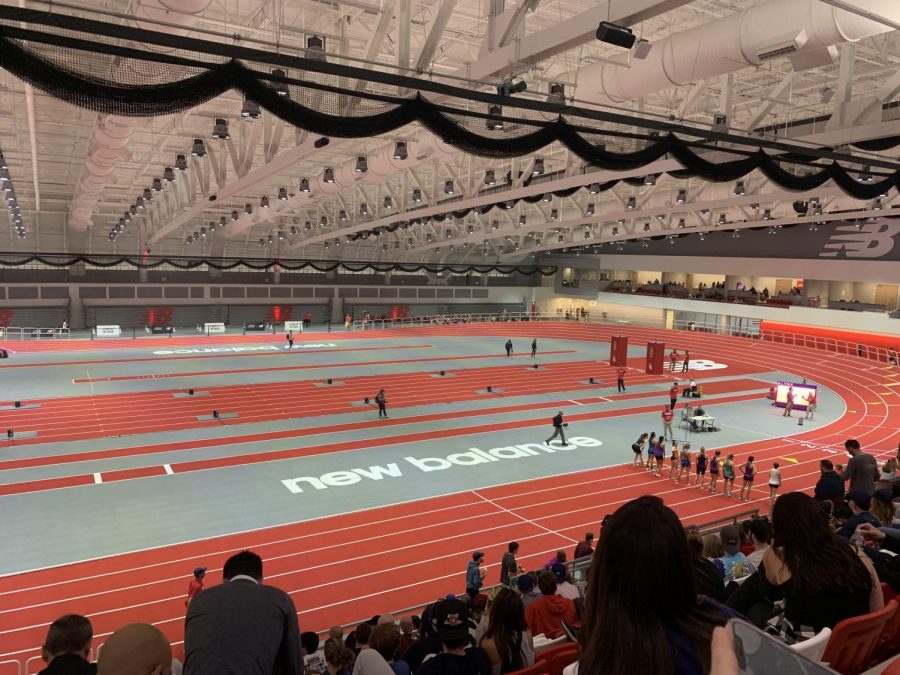 A new facility where Suffolk’s track team will practice and compete opened its doors Friday night to host its first meet, along with a new world record in the distance medley relay.

Suffolk University Indoor Track and Field is lucky enough to call the TRACK at New Balance their new home for the winter track and field seasons. They will be doing their track workouts in the facility a few times a week during the frigid months and host a meet.

Construction first broke ground in April 2019. The state of the art facility is located in Boston Landing across from New Balance Headquarters, a short walk from the Boston Landing commuter rail stop.

Friday’s Night at the TRACK at New Balance event consisted of six different heats of the mile before the meet finished up with the distance medley relay. The Team USA DMR consists of four legs, each of different distances: 1200-meter, 400-meter, 800-meter and 1600-meter.

The record-breaking Team USA quartet was made up of Heather MacLean, Kendall Ellis, Roisin Willis and Elle Pierre St. Purrier.

Their efforts earned them the time of 10:33.85, the new DMR world record. The previous record for the DMR was set two months earlier with a time of 10:39.91.

Ellis was a last minute addition to the team. Originally, 400-meter hurdle Olympic Champion Sydney McLaughlin was going to be the second leg, but scratched the night before. According to Let’s Run, Ellis hopped on the red-eye flight from Los Angeles to Boston, scratching in another meet to help break the record.

“It’s so amazing that Kendall was able to step up like we’re really excited to have her and she’s an amazing 400 runner and she did exactly what we needed and exactly what was supposed to be done.” MacLean said about Ellis in an interview with Let’s Run.

Since McLaughlin opted out of the relay, she was able to spend some time during the mile heats with fans taking pictures with her while giving out autographs.

Willis is a high school senior and the 800-meter indoor record holder in the U.S. with a time of 2:00.06, according to the Stevens Point Journal.

Willis announced on her Instagram that she will be continuing her impressive running career at Stanford University.

There are lights that move along the inner rail on the new track that were set to move at world record pace. As the DMR progressed, the trail of lights was behind Team USA the entire time.

The announcer stated during the last leg that the team was six seconds ahead of the time to beat.

Pierre St. Purrier rounded her final lap around the oval and the crowd began to roar the loudest they had all night. She was well in front of the lights indicating world record pace, looking on atMcLaughlin and one other who were at the finish line holding the banner that Pierre St. Purrier would break, along with the world record.

“It was fun because it was a team effort…like if you run a little bit too slow or a little bit faster than what you’re supposed to like all of it coming together was going to be the final time and that’s like something you don’t get to be a part of as often as a professional,” said Pierre St. Purrier in an interview with Let’s Run.