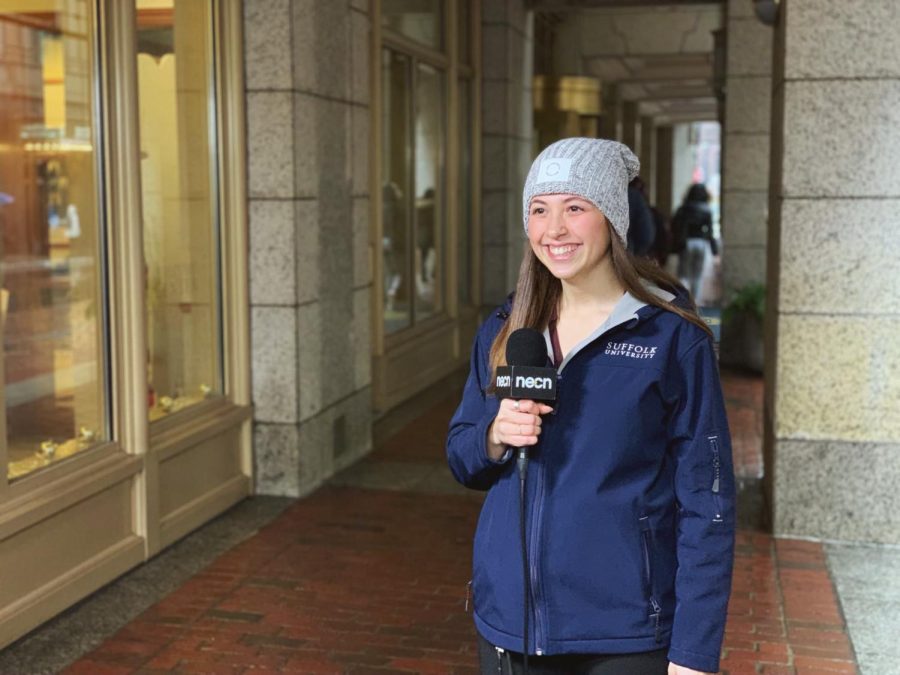 Arroyo outside of Suffolk's 73 Tremont building during her time as a Suffolk in the City reporter.

After years of sports experience and philanthropic work, Suffolk University alumnus, Hannah Arroyo, has now found her path as well as a brand new position with the New England Patriots.

The newest community relations coordinator for the organization has been dreaming and working to break into the sports industry since she was young. While many people pursue sports to speak with athletes or to make a name for themselves, Arroyo always wanted to be involved with what was happening behind the scenes.

In her high school years, Arroyo read a book written by Dustin Pedroia of the Boston Red Sox discussing some of the hurdles he overcame in his career. Learning about athletes, their stories, as well as their involvement with the community is something that has always piqued Arroyo’s interest.

Graduating from Suffolk in 2020 with a degree in broadcast journalism, Arroyo thought this field was a way for her to tell stories that went beyond game statistics and highlights.

In her experience, when covering sporting events or games, she’s always been able to learn more about the athletes themselves, how they got to where they are and how they’ve persevered.

“That’s what brought me to journalism,” said Arroyo. “I wanted to know more.”

When the time came to choose a college after high school graduation, there was one deciding factor that made Arroyo want to become a Ram. Suffolk’s very own Studio 73 was an opportunity she couldn’t walk away from.

After touring and visiting the studio itself, the overall atmosphere and the chance to work on any projects as a student is what ultimately brought her to Boston.

While she found that Suffolk offers many resources and tools in order to help students get ready for this field, Arroyo also added how breaking into the industry isn’t as easy as people think it to be.

“The path into sports is.. long and really hard,” said Arroyo. “But for me, there were a few things that helped and the first thing was getting to work for the Red Sox while I was in school.”

Arroyo worked security for the team during her time as a student and was able to make connections with people in the front office and learn more about the industry as a whole.

When May 2020 came rolling around, Arroyo struggled to find a position in the industry due to COVID-19.

“There weren’t sports jobs available so that was a little bit difficult to swallow and realizing I wasn’t going into broadcast,” said Arroyo. “But one thing I really wanted to do was stay involved in any way that I could.”

For the past few summers, Arroyo has taken part in Fenway Sports Management University, a program that holds sessions with different people in the sports industry, who explain what they do and how they got there.

She began to look back on her previous experiences in college as a resident assistant and as a tour guide, which made her realize how much she loved to help others and make impacts on those around her. This new realization made her take interest in community relations, foundation and philanthropy work.

“It’s something that’s a little bit bigger than yourself and it’s bigger than the sport,” said Arroyo. “It’s about giving back to the community and helping out where you can.”

As a Suffolk student, Arroyo also had the opportunity to do an internship with Channel 7, a local news station in Downtown Boston. This experience gave her insight into the day to day of the sports industry, including getting ready for game days, being in team locker rooms and overall exposure.

In addition to professional internships and student involvement, Arroyo attributes a lot of her experience and success to Suffolk in the City, a broadcast program offered through Studio 73. She was also the sports editor for the Suffolk Journal.

“Getting to go live on TV, create news packages and work with folks at NECN was such a great experience and something that people still point out on my resume,” said Arroyo.

Entering the sports industry can be difficult, but entering the industry as a woman is a whole different ball game. One of the reasons she decided to pursue this industry is because she wanted to become a role model for other young women and show them that can do it too.

“I want to show them that it’s possible to be a woman in sports,” said Arroyo. “I think it’s amazing to see that there are so many women in sports now in any sort of role.”

Arroyo had great women inspire her to enter the industry and who pushed her to keep going. She has experienced times of discouragement, to the point where she considered leaving the industry entirely.

However, her connections with other women in sports and their words of encouragement are what kept her grounded.

“[They would tell me] you’re young, don’t give up. Just keep applying because eventually you’re going to land that first role that helps you get that next role,” said Arroyo.

After all of her experience and everything that comes with trying to break into the sports industry, Arroyo advises Suffolk students to put themselves out there and to not be afraid to talk to people.

She states that it’s okay to do things that seem embarrassing in the moment because they may actually help you in the long run.

“Always follow your own path and really put yourself out there and don’t be afraid to learn,” said Arroyo. “Don’t be afraid to set up a call with somebody to learn more, do research and make connections.”

Taking any jobs that come your way is something Arroyo believes in thoroughly. No job is too big or too small.

Her dedication and passion for the industry as well as the stories that go on behind it are what recently landed her a communications position for the Patriots. In her new role, Arroyo works to manage and assist with service and manage relationships between partner organizations and volunteers.

“Be curious, ask questions and do what you can to stand out,” said Arroyo.