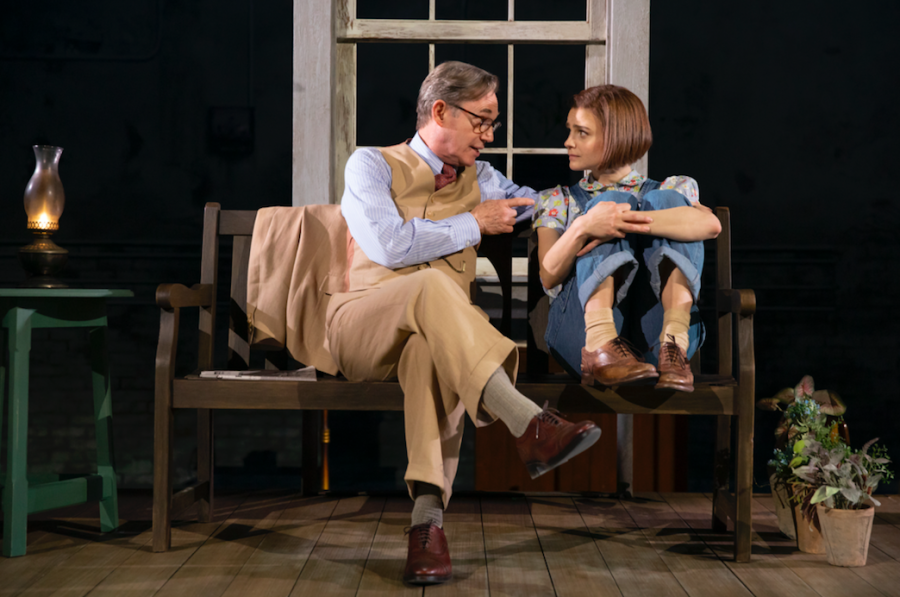 Playwright Aaron Sorkin’s take on the classic novel “To Kill A Mockingbird” by Harper Lee takes flight during its run at the Citizens Bank Opera House.

Boston’s best theater, previously known as the Boston Opera House, played host to the touring cast and crew for “To Kill A Mockingbird,” which held shows from April 5-17.

The show closely mirrors the original plot of Lee’s novel, following children, Scout and Jeremy “Jem” Finch, as well as their friend Charles Baker “Dill” Harris as they experience the Finch children’s father, attorney Atticus Finch, take on the challenge of defending Tom Ronbinson, a Black man accused of beating and raping a white girl in their small farm town of Maycomb, Alabama.

The show and novel take place in 1934, and highlight the racial tension within the Deep South, as well as the aftermath these communities faced after being pulled apart by the Civil War. The war, which ended slavery in the United States, left many white Americans unhappy with the newly-freed Black Americans, particularly those who lived in places like Alabama.

As Scout, Jem and Dill recount the events of the previous summer, viewers are thrown into their world, and are left trying to solve the mystery of their father’s case, as well as one surrounding a mysterious neighbor – all before school resumes in the fall.

Directed by Bartlett Sher, the show is a wondrous take on the classic novel many were forced to read in high school. The staging was intriguing, the set transformative and the casting was done with expertise and insight.

Despite being sat in the far left orchestra with a ‘limited view,’ nearly every moment of the show was blocked downstage, allowing even those who were hindered by light fixtures and curtains to enjoy just about all of the play. The only hidden pieces included the jury during the courthouse and trial scenes, as well as some minor set pieces in the transitional moments.

While it would have been lovely to see the cast that portrayed the jury in Robinson’s trial, as well as their reactions to the shocking revelations made during witness cross-examinations, being close enough to see the expressions for the rest of the play made this sacrifice worth it.

In terms of the story, the narrator Scout is meant to be no older than nine, and Jem and Dill no older than 14. However, the three ‘children’ are played by adults. While it is understandable that the show contains adult language and mature subject matter, the fact that these children weren’t truly children took away from the intensity of the storytelling and message Lee had intended.

Despite the inaccuracy in age, the portrayal of the three main characters was incredibly well done. Played by Melanie Moore, Scout was intelligent, sassy and a firecracker on stage. Scout handles most of the narration, and Moore’s take on an Alabama accent was both adorable and accurate, holding the attention of the audience as she sets up the story.

Her brother Jem (Justin Mark) held such a heavy presence on stage. Jem is a protective brother and son, and Mark demanded all eyes be on him, even when it wasn’t necessarily his moment to shine. Mark was able to unfold the character of Jem as the show went on, and had the audience learning with him as he faced the challenges of growing up as the only son of the most hated man in Maycomb.

Dill, the Finch children’s neighbor and silly sidekick, added just the right amount of comic relief to such a darkened plotline. Played by Steven Lee Johnson, the comedic timing was perfection, and the tone of voice used was just high-pitched enough to give Dill the boy-next-door innocence he needed to charm viewers.

Dill has a handful of serious moments in the show, and Johnson executed them beautifully. Towards the end of the play, during a heart-to-heart with Atticus, Johnson brought tears to my eyes as he shared Dill’s struggles of being a boy with absent parents left to his own devices. It’s safe to say Johnson is the hidden gem within this cast.

However, the true star of the show was Mr. Atticus Finch himself, played by Richard Thomas. A Tony-nominated and Emmy award-winning actor, Thomas raises “To Kill A Mockingbird” to new heights. He brings just enough seriousness to the rigid Atticus, and enough experience to the show to help improve the entire cast. Thomas is a force to be reckoned with, as is Atticus Finch, and the two made the most enticing, beautiful pair.

Honorable mentions within the show included Jaqueline Williams, who played the Finch family cook and maid Calpurnia, and Anthony Natale who played Link Deas, a witness in the Robinson case. With Link Deas, “To Kill A Mockingbird” diverts from the original story and has Natale play him as deaf, something originally done with the sophomore cast of the Broadway version of the show. Natale speaks the majority of his lines through American Sign Language, and the three children take turns as his narrator in an incredibly moving performance.

The costuming, lighting and makeup were all standard, nothing in particular jumped out as outstanding or revolutionary. The set design, however, was incredibly well done. The stage transformed from a courtroom, an interrogation room, the Finch’s front porch and back again countless times through the production, and it was done seamlessly thanks to the cast’s quick work.

The Finch’s front porch was particularly beautiful, with a screen door, window, wooden bench and three mismatched wooden chairs scattered across to add dimension and life to the setting. A good majority of the plot unfolded here, and it was lovely to see Scout and Jem learn countless life lessons in their own front yard.

Though “To Kill A Mockingbird” has packed up and moved to its next stop on tour, the show is a striking portrayal of a classic story, and is most definitely worth catching on Broadway or in the next city this cast and crew stop in.