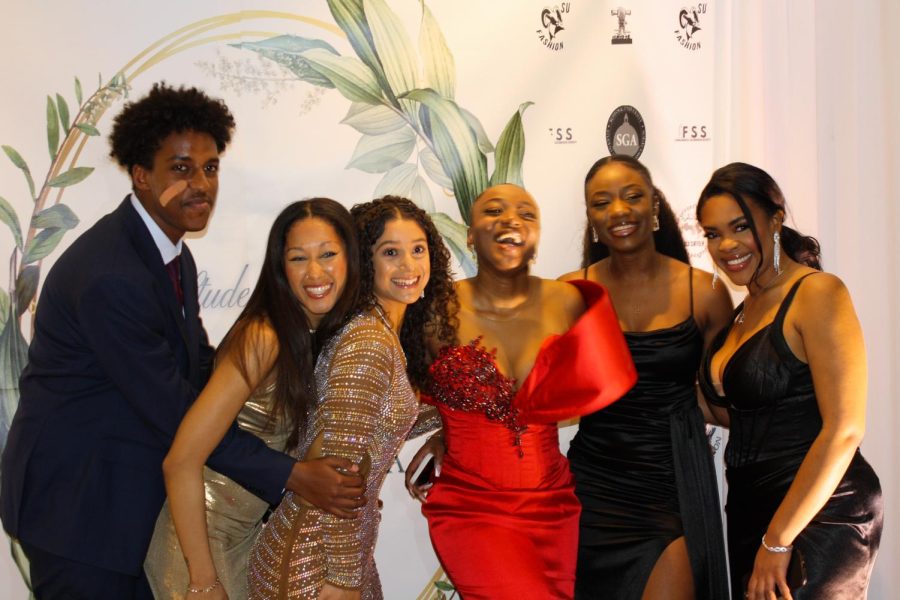 Students come together at the "Remembering our Roots" Gala on April 9.

ASA worked in conjunction with the foundation to raise profits for underprivileged and visually impaired students in Nigeria.

ASA President and founder, Oluwatumininu “Tumi” Akinyombo, worked in-depth with the rest of the club to make conscientious decisions about the vendors they worked with for the gala. From the table linens to the food and presenters, Akinyombo made sure African culture was at the forefront of the event.

The gala had a red carpet with photographers from Suffolk’s Photography Club, a 360 degree photo booth, a silent auction and guest performances.

The event sold out at 100 seats. Tickets were free, but funds were raised through other means.

“We did a silent auction, the proceeds went to the foundation and we also collected donations as well,” said Akinyombo. “We have a drive open for one month and a link for donations that is open for one month. The gala was to kickstart the whole process.”

“[The gala] highlights and celebrates their culture as well as gives back to a really great cause,” said Casey Mulcare, director of Student Leadership & Involvement at Suffolk.

“The event is absolutely fabulous, this is such a great event because it brings our students together and it’s a celebration of African roots and about giving back to Africa and the children in need,” said Kelly.

Kelly also noted that events like the gala are a part of the Suffolk experience, and encourages students to give back to their communities.

The colors of the gala closely represented the Pan-African flag with hues of white, green and gold. The round tables each had small but beautiful details, from the gold plates to the floral centerpieces, each piece carefully chosen.

The seated portion of the gala began with a video from visually impared students who would be directly benefiting from the gala. They spoke of their daily struggles and lack of resources.

After the video, Boston University’s premiere African dance troupe, the Afrithms, performed. The troupe came out in full force and gave a high energy performance to cheers from the crowd.

After the Afrithms, guest speaker Dolapo Akinyombo, a representative of the CLICE foundation, which gathers resources to help underprivileged areas in Africa, spoke to the crowd. Akinyombo spoke about the students the foundation hopes to help, and that they often feel alone and without support in their struggles.

“The ones who we are gathered for today are the ones who have given me a different perspective in life,” said Akinyombo. “They’ve looked their disadvantages in the face and they’ve said ‘I can do more.’”

Akinyombo said she hoped the gala would be a jumping off point for these students in Africa to recognize that they are not alone – that people all over the world do in fact care about them.

The second guest speaker, Nurudeen Amusa, lost his sight when he was 5 years old. He counts himself as one of the fortunate students to come from Africa.

“There were people who gave me an opportunity in the form of scholarships, help and assistance on different levels,” said Amusa.

He also recognized that not every visually impared person receives the sort of advantages he had. Amusa notes that even in the U.S., resources for the visually impared are limited, and it takes years for those resources to reach Africa.

“There’s a lot of potential over there and if I didn’t have these opportunities, I wouldn’t be standing here today,” said Amusa.

The gala moved forward with dinner by Tumbo’s Kitchen, which specializes in traditional African food.

The silent auction also opened with paintings, jewelry and beaded bags that were made by members of the CLICE foundation.

The night had a special guest performance by Arya Starr, a Nigerian singer, songwriter and model.

The gala is one of many events hosted by the Suffolk ASA club to bring a sense of inclusivity to campus.

“We were able to create a safe space for students who identify with and even celebrate African culture,” Akinyombo said. “It was a space to recognize the beauty of our culture and historical roots.”