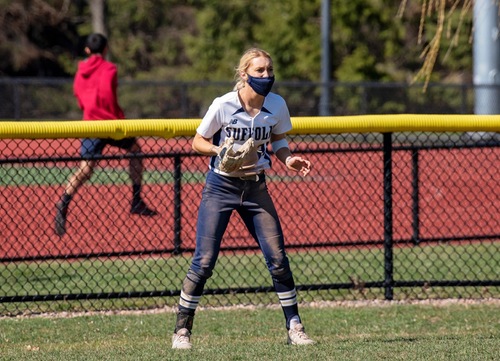 Caitlin Murphy plays the filed in a 2021 Suffolk softball game against Wentworth.

The Suffolk University softball team has gotten off to a red hot start, beginning the season with a 14-6 record.

20 games in, the Rams already have more wins than last year’s team had the whole season, finishing the 2021 campaign with a 12-17 record.

Suffolk is also in the midst of their second season in the Commonwealth Coast Conference (CCC) after leaving the GNAC prior to the 2021 season.

Suffolk currently sits second in the standings behind Endicott College in the CCC standings as the Rams are 5-1 in conference play and the Gulls are 7-1.

Senior captain Caitlin Murphy attributes much of the team’s success due to their trip down to Myrtle Beach over spring break where they got to come together and gel as a team.

“The trip played a big factor in us as a team getting settled in,” said Murphy. “I think if we never had that experience, our situation would  be a lot tougher… but it was good we were able to get some of the kinks out while down there.”

Murphy currently leads the CCC with 10 stolen bases on the year already to go along with a .357 batting average and seven runs batted in.

Along with Murphy’s leadership as a senior captain, the team has also been aided by the help of many freshmen already making an impact on the field and in the locker room.

“This is the most bonded team I’ve been a part of during my four years at Suffolk,” said Murphy. “It’s awesome because we have such a big freshman class and I don’t think someone in the room would be able to decipher who on our team is a freshman and who’s a senior.”

No freshman has had a larger impact than Suffolk ace and slugger Ava Brandow who is leading the team in categories for both pitching and hitting.

Brandow is second on the team in earned run average with a 3.18, tied in first with a .393 batting average and first on the team with three home runs.

“She brings a level of confidence as a freshman that you don’t often see,” said Murphy. “Her bat has been on fire since the moment the season started and I don’t think any of us were expecting to do this well, it’s blown us all out of the water.”

This is all the first season for the team under new head coach Janet Maguire who was hired last fall after spending the previous 12 seasons coaching at Bridgewater State University.

“She’s honestly one of the most organized and dedicated coaches I’ve ever had,” said Murphy. “She’s all softball all the time and I think she’s been a really big contributor to our success so far this year.”