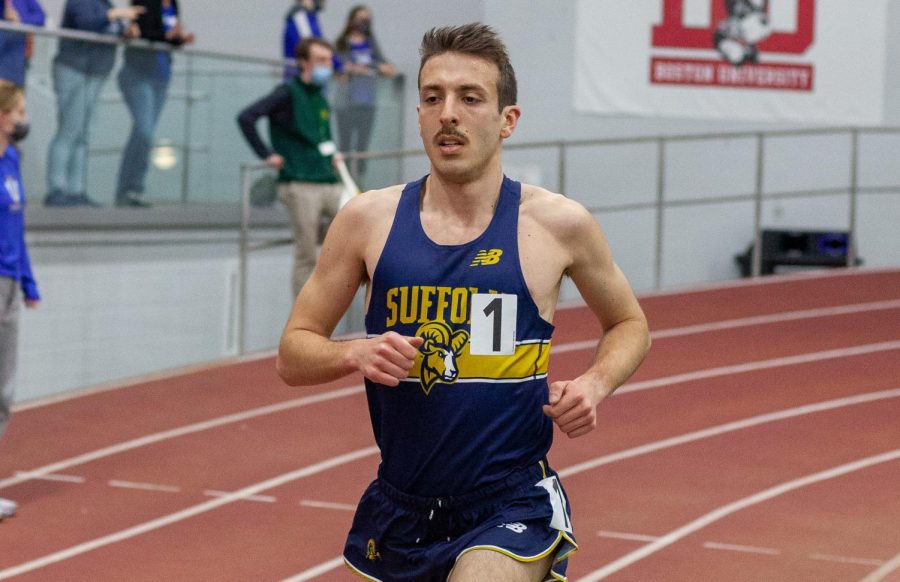 Csiki-Feyer at the GNAC Championships on February 12

Csiki Fejer placed third in the 5k, in a race where he was the only athlete that was not from a Division 1 school.

“We’d been preparing for a big race for a while. The goal was to go down there and stay consistent through the race,” said Csiki-Fejer of his personal best time.

Csiki-Fejer finished in 14:09:18, beating out 57 of 59 runners in the field which included athletes from Duke, Virginia Tech and Michigan.

“It was crazy to be with some per se celebrities,” said Csiki-Fejer.

His time was the fastest by any Division III athlete this year, and is the 21st best time in the 5k in Division III all time, according to Suffolk Athletics.

Friday’s performance earned Csiki-Fejer a spot at Regionals in the 5k. He has already qualified in the 1500 meter.

On Tuesday night, Csiki-Fejer announced that he will be continuing his education at Duke University, where he will pursue his Masters in Political Science. He will finish out his years of athletic eligibility as a Blue Devil. He posted a picure next to a Duke sign on his Instagram with Suffolk University head trach and field coach Will Feldman, who also made he trip to North Carolina.

Csiki-Fejer has two years of indoor and outdoor track eligibility, and one season of cross country left in his collegiate journey.

For his performance in the Tar Heel state, he was named the CCC Track Athlete of the Week. His teammates Carter Nevulis and Micheal Balestra also earned accolades this week, earning Rookie and Field Athlete of the Week, respectively.

Nevulis ran outdoors for the first time in his collegiate career this past weekend, competing at the Gordon invitational. A 15:17 in the 110 meter hurdles earned him a spot at regionals and second place in the event. He also took 12th in the 100 with a time of 11.99

Balestra’s awards were earned from a 1st place performance at the Regis Spring Classic last Friday. A 46.99-meter throw earned him first place in the field.

Csiki-Fejer and the rest of the Rams will suit up for the Penman Relays at Southern New Hampshire University on Saturday, April 16.