‘Pilgrims of the Night’ intertwines a series of imaginative stories 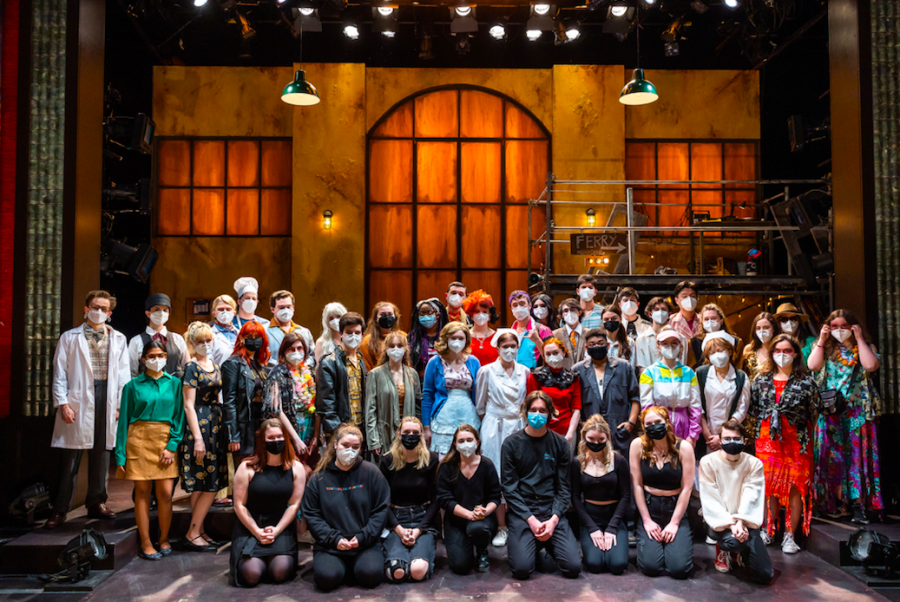 The cast and crew of Suffolk Theatre's "Pilgrims of the Night."

Suffolk University’s Theatre Department took audience members on a fantastical journey with their rendition of “Pilgrims of the Night.”

The show was performed by a cast of 35 students on April 7-10 at Modern Theatre. The show was directed by Suffolk theatre professor Wesley Savick, who chose to put on “Pilgrims of the Night” again after making his Suffolk directorial debut with the play 22 years earlier.

Savick said he chose this show for its originality and vision.

“‘Pilgrims of the Night’ is not merely an expression of imagination. I believe it is the embodiment of it,” said Savick in his director’s note.

“Pilgrims of the Night,” written by storyteller Len Jenkin in the 1990s, is a story that brings an unlikely group of characters together and leaves them stranded at a ferry terminal. To pass the time during a night storm, they take turns telling their own outlandish stories.

The show opens with Poor Tom (Vincent Douglass), the insightful narrator who works at the ferry platform. He is soon joined on the platform by Samuel Sundown (Robert Fennessey-Stevenson Jr.), who awakes from his nap on a nearby bench only to realize that he has missed the ferry.

Another passenger who has missed the ferry, Lily Black (Lily Ayotte), is a fierce journalist looking for a story. Big shot movie producer, Ray T. Fox (Alex Gorski), then enters followed by Viva (Madison Ashworth), the ferryboat captain’s wife. The final stranded passengers to enter are magician and con-artist Professor Hubert (Nathan Lavoie) and his companion Zoe (Emma Hudd). With a storm underway and their boat gone, the seven main characters share curious stories while they wait.

The stories were strange and, although very different, each story circles the message that we are all somehow connected, just like how the fateful seven main characters met on that ferry platform. Some of their tales included a gold-digging wife and a great flood, a girl who takes a job in a tropical paradise only to end up under a strange sort of mind control and mad scientists attempting to rewire the human brain to be able to speak with otherworldly beings.

The stories are intertwined as characters from one tale appear in another. Though each story is brief, it was not hard for the wacky characters to stand out and left the audience giggling at every other line.

The set, designed by senior Justin Lahue, was beautifully done. The stage depicted the rickety ferry platform in great detail, beholding a tattered couch, flickering lights and a ferry boat sign, of course.

That platform is where the entirety of the show was performed, but the brilliant performances were what made the show. With very few props and remaining in the same setting, the actors themselves were the ones that painted different scenes for the audience, relying heavily on imagination.

The actors’ range of skills easily took the audience from tropical paradise to scenes with mad scientists. Every character in the story was well played, from the seven stranded at the ferry terminal all the way to the colorful characters in their tales.

The show was clever and funny, yet powerfully moving, and not just for the audience. It was an emotional final performance for the cast, as they could be seen shedding some tears and sharing a group hug, no doubt celebrating the dedication they put into the show and the relationships they formed perfecting “Pilgrims of the Night.”