A journey back to the Middle Kingdom 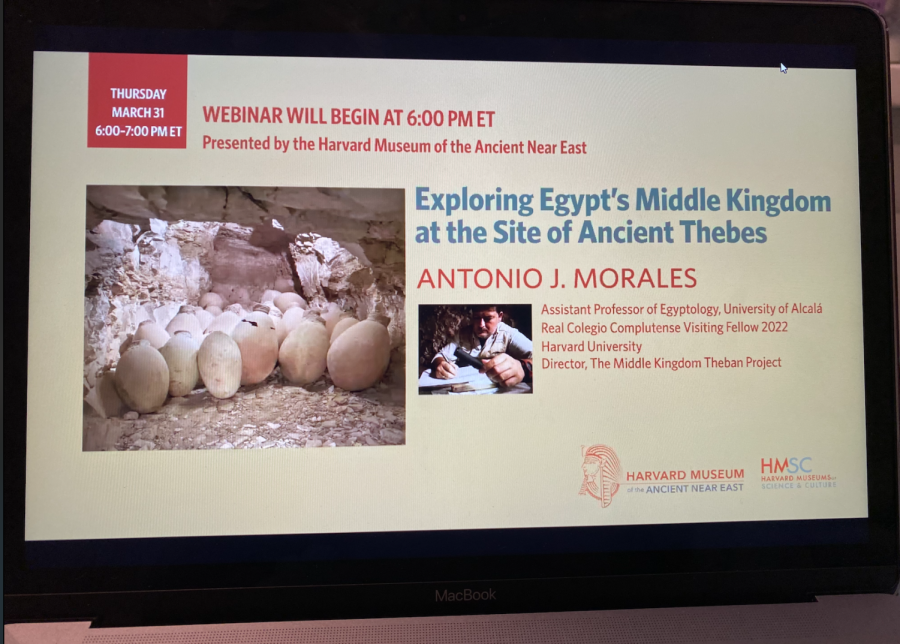 The mysteries of the Middle Kingdom Theban Project were revealed on March 31.

Exploring Egypt’s Middle Kingdom at the Site of Ancient Thebes was the second lecture in the Egyptological trilogy hosted by the Harvard Museum of Science and Culture.

Along with his research associates, Morales explored the site of Ancient Thebes as the head of the Middle Kingdom Theban Project, and aims to study several of the tombs of the late 11th and early 12th dynasties.

“Tonight, we go back to the Middle Kingdom,” said Der Manuelian, who introduced Morales.

That is indeed what Morales did, discussing the team’s exploration of their most recent findings at the site and its importance.

The team’s goal at the project is to work with scientific initiative, studying archaeology and achieving a more extensive knowledge of the Middle Kingdom.

The Middle Kingdom is what they describe as the “golden ages of cultural, intellectual, and social developments in the history of pharaonic Egypt.” Their team is made up of more than 40 researchers and students, 100 local workers and 1,000 project followers, bringing different approaches, methodologies, disciplines, expertise and experiences.

With the team dedicating so much to the project, it is no wonder they were able to make discoveries that could help to develop and document new findings for further publication.

“We have all kinds of approaches and methodologies for discussing and for dealing with the materials we find in Egypt,” said Morales.

Their project took a deeper look at the tombs of the royal treasurer Henenu, the vizier Ipi, the royal seal-bearer Harhotepl and the bowman Neferhotep, as well as monuments to Dagi and Djari.

Some of their most interesting findings included a well-preserved bouquet of flowers made as an offering and pieces of a parchment the team intends to re-assemble and decipher. They finished excavating shafts in a tomb of Henenu, found new corridors and brought to light hundreds of mummies, textiles and Ceramics to be analyzed.

The expedition, which lasted 50 days and ended on Dec. 20, left the team satisfied but sad to end their journey.

“It has been a campaign full of emotions, discoveries, new friendships and, above all, a lot of work,” read the Middle Kingdom Theben Project’s last diary entry, posted on their website.

The Harvard Museum of Science and Culture invites those interested in learning more about Egyptology back for one last time to see their third lecture which will be held on April 21.