‘Everything Everywhere All At Once’ is a multidimensional good time 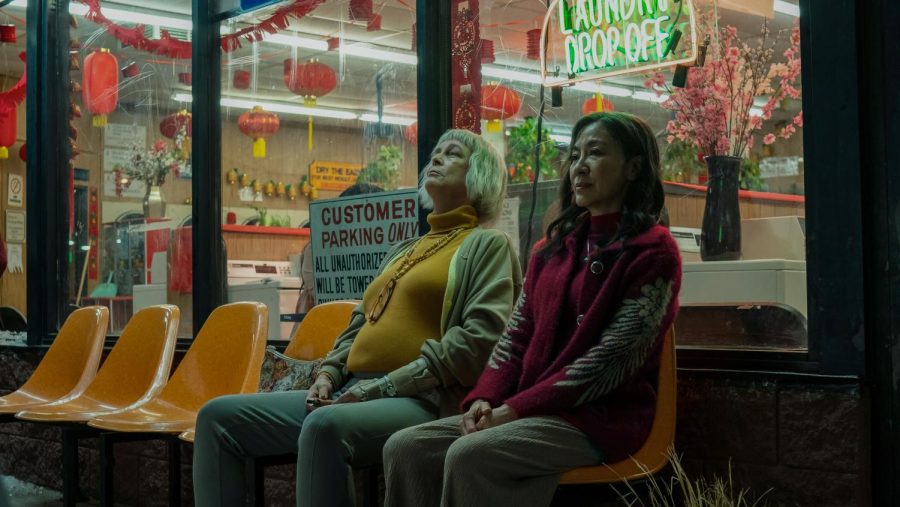 Jamie Lee Curtis and Michelle Yeoh in "Everything Everywhere All at Once."

With their newest film, “Everything Everywhere All At Once,” the writer-director duo known as Daniels – Daniel Kwan and Daniel Scheinert – have created a multi-dimensional action comedy with something in store for all.

“EEAAO” keeps the viewer engaged and excited the entire time, and while the film does have a neatly tied together and safe ending, its central message excuses this factor.

The film stars renowned actress Michelle Yeoh as Evelyn Wang, a Chinese-American woman who owns a laundromat with her family.

On the day of her father’s birthday, Evelyn is juggling customers, cooking dinner, her daughter Joy’s coming out to her grandfather, a looming divorce notice and an investigation of her business by the IRS.

In the midst of this confusion and chaos, Evelyn is plunged into an unexpected hero’s journey where she must activate other personas from alternate universes to defeat a mysterious foe named Jobu Tupaki, who has created a black hole that threatens all of the dimensions.

To activate these personas, the characters have to engage in peculiar actions, such as chewing used gum or saying “I love you” to “jump” to another world.

The characters activate a plethora of other personas and skills, including but not limited to a martial arts master, hibachi chef, multi-dimensional scientist, a rock and hot dog fingers.

It is no secret that the film’s title serves as a viable synopsis for the picture.

“EEAAO” is a carefully crafted mixture of comedy-action, science fiction, family drama and martial arts; all held together by themes of hope versus hopelessness and a critique on modern society.

On the latter theme, the directors guide the film towards highlighting the stressful pace of our modern lives and metaphorically point out the irrelevance with the multi-dimensional setting. The film conveys the overwhelming nature of our responsibilities, and how insignificant it can all really be.

The film is driven by powerful and complementary performances by Yeoh, Stephanie Hsu, Ke Huy Quan and James Hong who play the mother, daughter, father and grandfather roles of Evelyn’s family.

Another highlight of “EEAAO” is the fast-paced editing, cinematography and CGI work that immerses the audience in Evelyn’s dizzying journey.

The film adopts distinct aspect ratios for the various universes and time frames in the film, with 1.85:1 used for the scenes with the “normal world” and 2.39:1 for the core “epic” moments of the journey. Thus, each setting or world has a unique visual style.

The film features visual allusions to many other films including “Kill Bill,” “Ratatouille” and “Chungking Express,” to name a few.

The only critiques of the film are in its repetitive nature. There are some jokes or subplots that are overdone until they lose their comedic punch and drag the pace of the film in the second half.

Regardless of these pitfalls, the film ends on a brighter note that is sure to bring joy to all viewers as they exit the theater.

A24’s involvement with the film is also interesting, as it may be the most commercially driven film from the studio yet. Those familiar with the Marvel Cinematic Universe’s multi-dimensional films feel like the target audience of “EEAAO” but this fresh take on the surging subgenre feels a bit more cinematic.

“Everything Everywhere All At Once” is sure to be popular with a wide range of audiences, offering something for all, and is a reminder for audiences to take a step back and see beyond our internalized worlds.