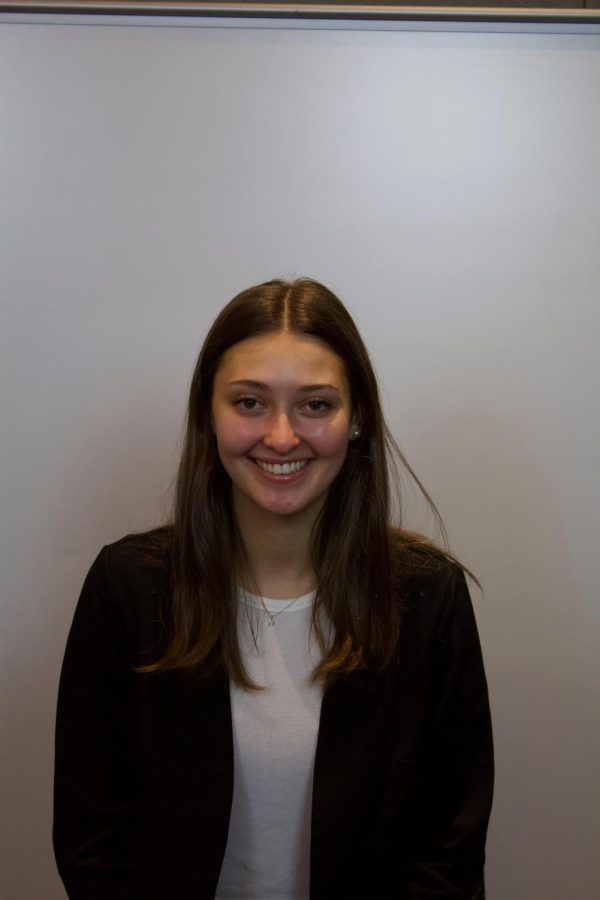 Isabella Tencer, a sociology major representing the Class of 2025, is running for the Student Government Association Secretary.

Tencer spent her freshman year at Suffolk University serving as a senator in SGA. She is also a member of Suffolk’s Theta Phi Alpha sorority chapter and has volunteered at the university’s Center of Community Engagement.

Most of her implemented changes began within SGA.

“I want to be more involved with the school. I think that I can bring a lot of new ideas. I have already participated in the dining committee and diversity and public relations,” Tencer said. “I feel like being well-rounded on campus is important and I think having a position of power on campus and creating change that can be seen is important.”

Outside of SGA, Tencer said she tries to stay involved with many student-led clubs around campus and is often found at events hosted by clubs, getting acquainted with the community she hopes to serve.

“I’ve been taking any free time I have to visit or contact different clubs and events in the school. They don’t know me, I just want to show up and support them,” said Tencer.

Tencer said she is aware of the role she would be playing as the secretary for SGA, especially in regards to hearing and promoting voices around campus. A large portion of the job of secretary is to work with the public relations committee to promote clubs and events on campus.

“If I was the vice chair of PR, I would want to push that, there’s a lack of communication and a disconnect,” said Tencer. “I want to try to find ways to announce when things happen, even make it mandatory for students to show up because people [clubs] put so much time and effort into these shows.”

Tencer said she has already made positive changes for students, serving as one half of a two-person team that meets bi-weekly to speak to the head of Smith’s residence hall dining services. She takes suggestions and complaints from those affected by the dining options and creates solutions based on problems she sees as well.

“A vending machine in the basement is cash only, but for months it only had two drink options, the rest was empty,” Tencer said. “I went down the other day and it was completely stocked, they clearly listened.”

Tencer’s platform is primarily based on creating a more welcoming and diverse SGA. Tencer said she believes that prioritizing diversity and representation is an important next step when it comes to the SGA and the Suffolk community as a whole.

“Off the bat, I need to be more educated as someone that is not an image of diversity. I want to have more contact and more relationships with people so I can hear constituent voices,” said Tencer.

She said she has already created change within the SGA by suggesting Suffolk implement the use of  “Lunar New Year” instead of “Chinese New Year” to be more inclusive to those who celebrate the holiday. She doesn’t plan to stop there.

“I see it [lack of diversity] in our own senate, we are definitely lacking certain people and I don’t know how to convince people how to join but my goal is to make more friends and promote and show the influence we have to get more people to join the SGA,” said Tencer.

If Tencer could give one piece of advice to Suffolk students, it’s to get involved.

“Put yourself out there and learn about new people and things, listen, truly listen. As a freshman, I wasn’t prepared to have any impact on this school and by just constantly putting myself out there and supporting random things,” said Tencer. “Getting my name and face known, I’ve already gained so many opportunities and become really connected with the school.”