‘Candlelight: A Tribute to Queen’ was a real good time 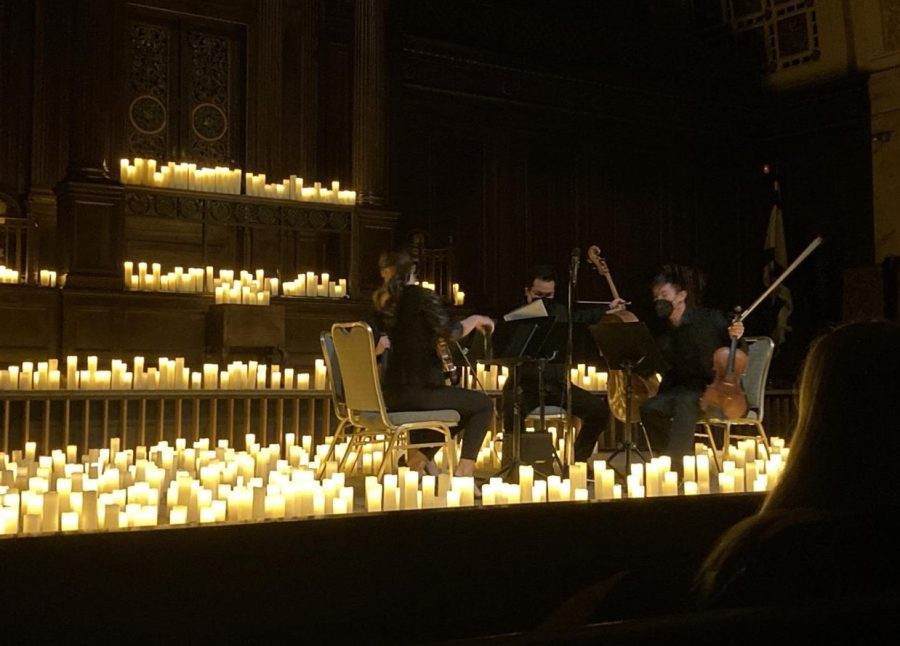 The songs of Queen, the popular British rock band, were performed as part of Fever’s ongoing candlelight series.

The series includes a string quartet on stage that was surrounded by candles in Brookline’s Temple Ohabei Shalom. Though the candles may have been fake, the string instruments elevated each song in a very real and beautiful way. The songs were given an almost euphoric sound, with each note more beautiful than the last.

They began with the song “Don’t Stop Me Now,” which is one of the more energetic Queen songs. It was an interesting choice that didn’t give the audience time to reconcile a rock band’s music with the lovely cacophony that sat before them.

The audience was also made up almost exclusively of people over 50, which makes sense, as the band formed in 1970.

The musicians themselves were clearly having a blast – the cellist was especially jamming hard during the first song. As they finished, the cellist took the mic to introduce the next song, which was a classical piece based on lead singer Freddie Mercury’s love of opera.

“O mio babbino caro” from the opera Gianni Schicchi was a palate cleanser and allowed the audience to acclimate to the sounds of the quartet before diving into more rock.

Hilariously, the musicians made sure to flourish their bows at the end of each song, allowing the audience time to recognize the need to clap. The next two songs were personal favorites of mine: “Killer Queen” and “Somebody to Love.”

“Killer Queen,” which starts with a snap, was absolutely beautiful on string instruments. The lead violin took the place of Mercury’s infamous vocals and did so with grace. The other three instruments effortlessly took over for the piano that is originally heard throughout the song.

The transition to “Somebody to Love” was flawless. As perhaps, in my opinion, the best Queen song, every note struck me. The song filled me with joy, especially after two years of being unable to experience live music due to the COVID-19 pandemic. By the end of the song, the audience had relaxed into a happy atmosphere.

Then, the audience became problematic. After the aforementioned years of isolation and Zoom meetings, it was atrocious that many of the patrons were holding their phones up to record two full minutes of music. After living our lives through a screen for so long, being fully engaged in the performance was far superior to watching it through a cell phone, especially when the phone in question is one used by a person in front of you.

The quartet followed up my two favorite songs with my least favorite. “Love of My Life” and “Crazy Little Thing Called Love” always seemed like they were written by a different band. The quartet even appeared to lose energy during these two, as opposed to when they were clearly enjoying themselves with other songs.

The cellist lost points when he took the mic again to say that the next song, “Under Pressure,” was written by Queen and David Bowie, and that he never knew that until recently. Though this was a massively insane confession: I forgave it, as we were in a temple.

The next few songs were just as lovely and captivating as the rest. “Fat Bottom Girls” being played by a string quartet was somewhat hilarious but still soothing.

Unfortunately, the audience was then called upon for participation. “We Will Rock You” begins with stomping and clapping. As the audience began hesitantly, it almost immediately devolved into an entire temple clapping off-beat.

Keeping with the theme, after a quick yet satisfying rendition of “Another One Bites The Dust,” the band played Queen’s most famous song, “Bohemian Rhapsody.”

The quartet almost begged the audience to sing along. What incurred was actually a very sad exhibit of musical spirit. One person said they sounded like “drunk babies,” whereas I thought it was more like a murmuring of nursing home patients – 10% confidence with 0% execution.

Although the audience was not the best, the quartet really was. Each song, even the classical ones, were beautiful. They touched the soul and brought joy to the audience. The enjoyment of the musicians cascaded around the walls of the temple, leaving the audience with a unique experience they won’t likely forget.

“Candlelight: A Tribute to Queen” will return for two more times on April 7 and May 19.