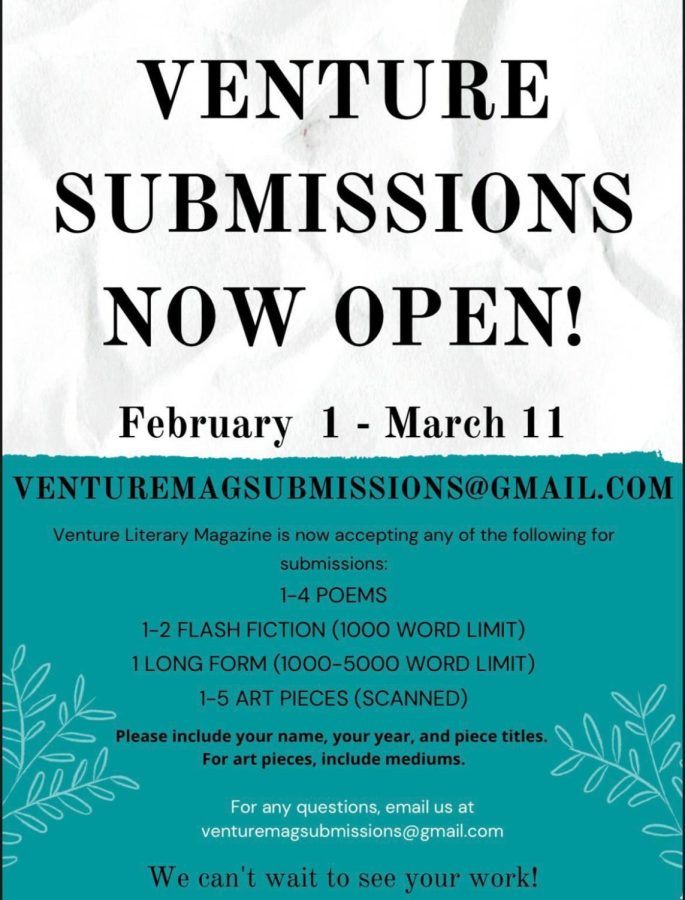 Suffolk's literary magazine, Venture, has been revived on campus and the club is now accepting submissions through March 11.

In 2018, the future looked bright for Suffolk University’s Venture Magazine. Suffolk’s first literature and arts magazine had just celebrated 50 years as an annual student-run publication. However, students and staff didn’t know what exactly the future had in store for them.

Venture released its final edition in May 2020, two months after students and staff were sent home due to the COVID-19 pandemic’s arrival in the U.S. The magazine was distributed online to editors and those whose work was featured, but the chaos of a global health crisis led to the magazine’s production lapsing for the 2020-2021 school year.

In the fall of 2021, English Professor Wyatt Bonikowski sought out students and staff throughout the English department to revive the magazine. With just a handful of students, Bonikowski held the first meetings for Venture via Zoom, where they discussed what the magazine was and what they sought to create from it.

Bonikowski helped to select executive board members by asking committed students to email him the positions they were interested in and what previous experiences they had that would aid them in producing a magazine.

While Bonikowski is on sabbatical for the Spring 2022 semester, English professors Katherine Horn and Jon Lee are advising the club. Editor-in-Chief Sarah Smith, a sophomore at Suffolk, said the club is almost entirely student-driven, but the advisers are always there when students need a hand.

“When I heard that the department was going to reboot the [magazine] after its unfortunate pandemic-era lapse, I immediately said I’d like to help,” Lee said.

After its revival, Venture now has an entirely new E-Board of six fresh-faced students who are excited for the newfound potential of the club.

Smith explained how Venture had to be re-built from the ground up, limiting the time available to produce a magazine compared to other clubs on campus with a scheduled precedent.

“The process has been a lot different, as Venture didn’t retain its club status due to the fact that it produced no content last year, and therefore we have spent a majority of our time getting our ducks in a row in terms of all that good stuff you have to do to set a club up,” Smith said.

The E-Board had to start from scratch on the process of setting up submissions and finding a printer without the guidance of previous editors, all of whom have graduated. They took notes from Casey Mulcare and Marissa Pierre of the Student Leadership and Involvement Office on past editions and innovated to create a “new era of Venture,” Pichette said.

Pichette, a junior, remembers Venture from her freshman year at Suffolk. While not a member, she submitted work and hoped to join her sophomore year.

“Unfortunately, COVID happened and I wasn’t able to join, but I was so excited when some professors from the English department announced that they were trying to get it started again,” Pichette said. “I jumped at the chance to be a part of the club finally.”

Although comparatively small to other clubs at Suffolk, Galvez, a junior, said the size of the E-Board works to Venture’s benefit.

“Our ideas are heard more, and we brainstorm ideas and objectives that could make Venture Magazine the best yet and continue the club’s goal for the future years ahead,” Galvez said.

Venture opened submissions on Feb. 1, accepting art, poetry, creative and non-fictional prose. While the original deadline for submissions was March 4, it has been extended to March 11 to encourage more students to submit their work.

So far, Venture has received a wide variety of submissions.

“From amazing digital art to poetry and a mix of both creative spoken words and imagery in one. There are a lot of amazing writers and artists out there in Suffolk,” said Galvez.

The E-Board is looking optimistically to the future, with hopes of producing multiple issues a year, expanding membership and introducing specific themes.

“My hope is that it becomes this huge opportunity for those quiet but privately loud with themselves to express and show the world, even at a university level, that they have ideas, aspirations, talent,” Galvez said. “That they are heard, seen, and understood.”

Venture is welcoming interested students to help review submissions and create the layout at an informational meeting Thursday via Zoom during activities period. Their first formal meeting will be Thursday, March 10 in Sawyer 1121. Contact [email protected] for more info.