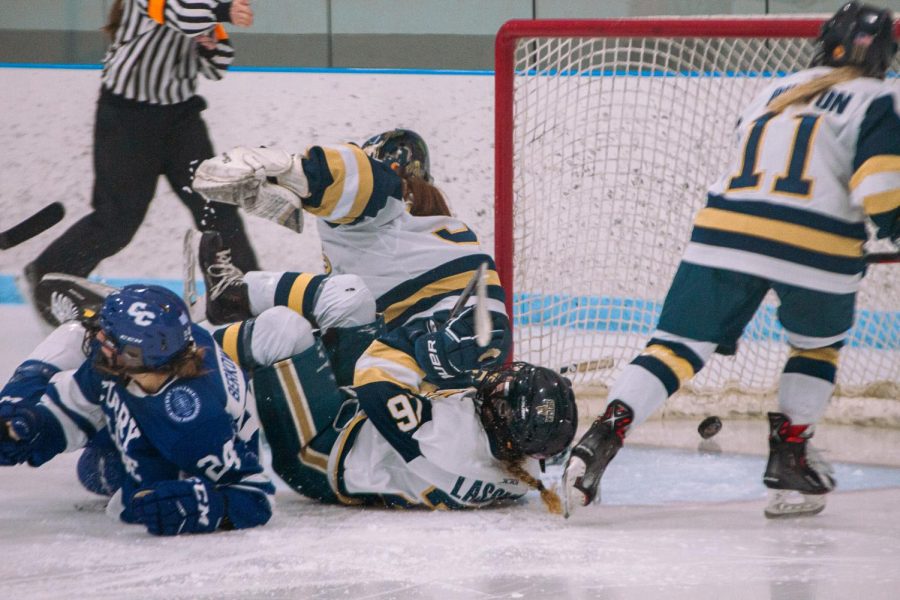 The Suffolk University women’s hockey team’s historic season came to an end after they were defeated in the first round of the CCC playoffs by Curry College.

The Rams finished the season with the best record in program history, securing a record of 19-5, surpassing the previous tally held by the 2018-2019 team who had a record of 15-9-2.

“This year has been super fun, winning definitely makes everything easier,” said senior Captain Madison Duff. “The mix of girls we had was definitely different from any other year and the fact that we were the winningest team [in Suffolk women’s hockey history] was super cool.”

Despite all the regular-season success which earned them the number two seed in the CCC playoffs, Suffolk was unable to take care of Curry, a team they had beaten 9-1 just six days before their playoff matchup.

Neither the Rams or the Colonels were able to score in the first period of action, but Curry opened the scoring early in the second. Suffolk was able to rebound as senior Payton Dockus and freshman Sam Molind both scored late in the second to give the Rams the lead heading into the third.

Suffolk was unable to hold on as Curry tied the game just over a minute into the third and retook the lead at about the midway point.

The Rams were able to get a couple of good chances to tie the game as they held a 5-on-3 power play as time expired.

As many players are upset with the disappointing performance, they also see it as a building block for the future as the team will have 15 players returning to the ice next season.

“This is definitely a huge learning experience for us and can definitely be used as fuel,” said Sciliopti. “This offseason is going to be about remembering that game and what it feels like to lose, 100% there’s been a rivalry that’s been born against Curry.”

Duff is also returning for one final season due to the extra year of eligibility from the COVID-19 pandemic.

“I’m definitely going into next year with a senior mindset,” said Duff. “Next year’s going to be my last year playing college hockey and probably hockey in general so I just want to make the most of it.”

Scilipoti, who played her first season with the Rams this past season after playing overseas with the Spanish international team, will also be returning for one last year.

“Next year will be my last year playing so I want to go out with a bang and win with this team because I know that we can do it.” said Scilipoti.