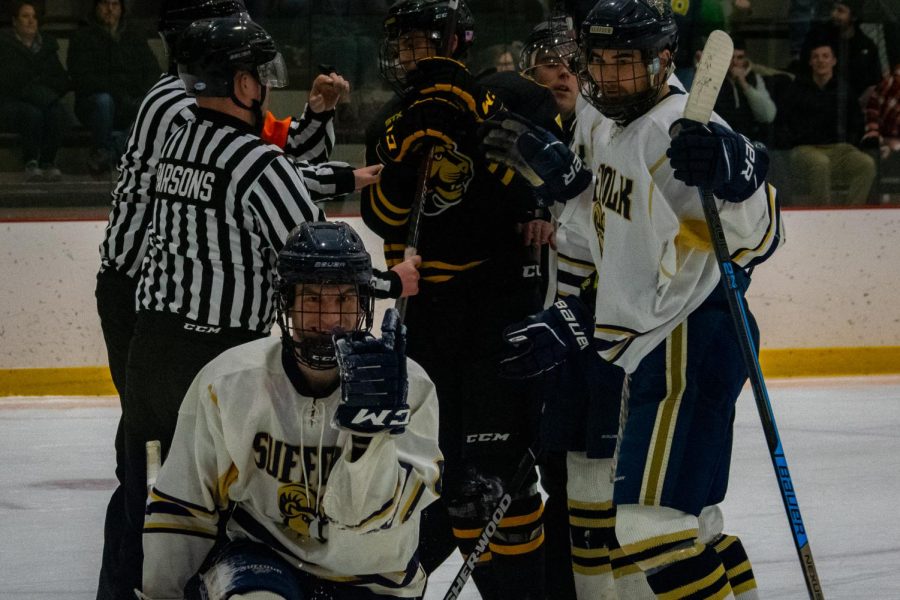 Senior Shawn Montgomery after being knocked down following his first goal on Saturday.

In a game dedicated to their seniors, the Suffolk University men’s hockey team wrapped up their regular season Saturday night with a 3-1 win over Wentworth.

Saturday’s game began with a pregame senior night ceremony. Senior forwards Joe Feeney, John Garrity and Shawn Montgomery, as well as defenseman Billy Roche, were honored as they got set to play their final regular season game with the Rams.

“They’re good hockey players, but better people,” Head Coach Chris Glionna said after the game. “Suffolk University is very fortunate to have these guys that are gonna go into the work environment and represent our university.”

The game started with back and forth action for most of the first period. Suffolk was finally able to strike first with about 6 minutes to go in the period, when a shot from junior forward Nick Lachaine seemingly snuck underneath the side of the net. After discussion between the referees, it was deemed a fair goal, and the Rams had a 1-0 lead.

With about a minute to go in the period, Montgomery was able to slide the puck past Wentworth goaltender Will Oliver on a breakaway, making Suffolk’s lead 2-0.

After an uneventful second period, the action picked back up in the third as Wentworth forward Joey O’Leary scored about four minutes into the period, cutting Suffolk’s lead to 2-1 and giving Wentworth new life.

The rest of the third period was very back and forth, but with about two minutes to go Montgomery found the back of the net for the second time that night, clinching a 3-1 victory for the Rams.

“I thought we were very hard on the puck, which usually is a sign of how good we can play,” Glionna said on the team’s performance. “If this ends up being [the senior’s] last game in Charlestown, I think they’ll always remember it as a game they played very well in.”

After Saturday night’s win, the Rams closed out the regular season with an overall record of 8-12-4.

Suffolk ended the regular season as the fifth seed in the Commonwealth Coast Conference playoffs and will travel to Curry College for a quarterfinal matchup on Saturday.

Curry finished the season with an overall record of 15-8-2. Forward Timmy Kent also led the CCC during the regular season in points (31) and goals (19).

Curry won two of the three regular season matchups with Suffolk, most recently a 7-2 blowout at Curry on Feb. 6. Suffolk’s win came in a shootout at home on Nov. 12.

“We hope that people can make their way down to Canton for the playoff game on Saturday at five o’clock,” Glionna said.