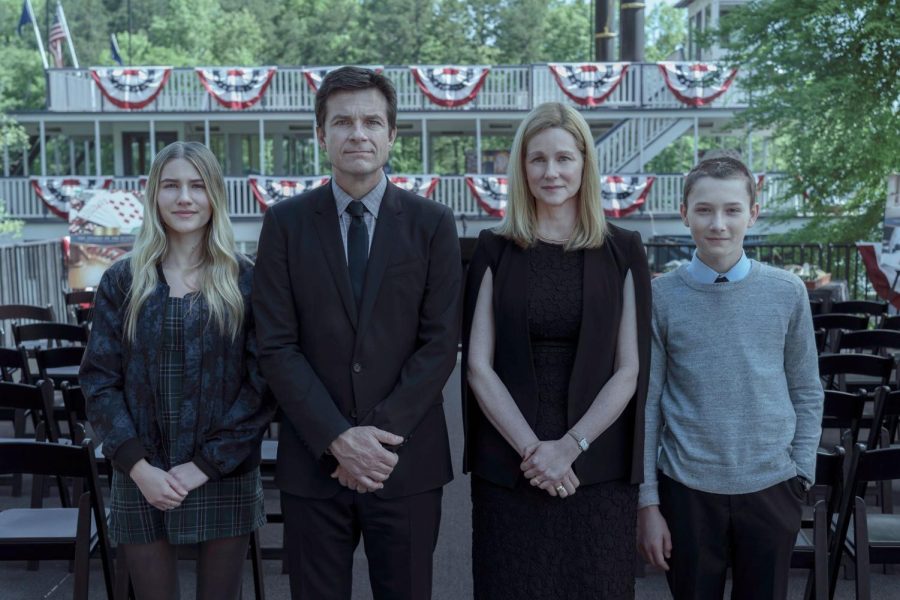 Season three of the fan-favorite crime and thriller show “Ozark” ended with a bang – literally.

The second and third season’s main antagonist, the character we hate to love or love to hate, Helen Pierce (Janet McTeer) got shot in the head by cartel leader Omar Navarro (Felix Solis).

This ending came as a shock to viewers as throughout the previous seasons, it seemed Helen was one of Navarro’s right-hand people. However, as they somehow always do, the Byrdes prevailed. When the cartel found themselves at odds between Helen and the Byrdes, they made themselves seem more useful in order for Navarro to spare their lives, they just didn’t think it was at the cost of Helen’s.

As the fourth season begins, we see Marty (Jason Bateman) and Wendy (Laura Linney) cleaning Helen’s remains off of them, as she was shot inches away from them. Navarro then hugged the Byrdes afterward, proving how ruthless he can be.  After cleaning themselves up, they are then expected to attend a party for Navarro’s children as if everything is fine. This first scene perfectly describes the show in a nutshell.

One of the most striking plot points this season is how we see Wendy, mother of two and wife to Marty, become increasingly out-of-touch, crossing the line from an unlikeable character, to one who seems genuinely sociopathic.

She goes through the majority of the season marking her diagnosed bipolar brother as missing and spinning a story about how he’s addicted to drugs. Spoiler alert: He’s neither of the two, and Wendy is the culprit behind his “disappearance”.

As if that’s not crazy enough, she also repeatedly tries to control her son, Jonah (Skylar Gaertner), who is resentful toward her because of what she did to his uncle, to whom he was very close.

While her daughter Charlotte (Sofia Hublitz,) Marty and Jonah clearly do what they do by force in fear of being killed, viewers see Wendy seemingly relish in the job – much to our horror and disgust.

On the other hand, if I could write a whole article about Marty Byrde alone, I would. Jason Bateman’s acting throughout this show is nothing short of phenomenal and award-worthy. Despite him being the reason they’re all in this mess to begin with, I always find myself rooting for him the most.

Marty’s ability to stay calm and rational in life-threatening situations is admirable, and his intelligence and way of always finding a solution to everything never fail to impress. I know one thing for certain – if I were ever in a bad situation I needed to get out of, I’d call Marty Byrde if I could.

We also see a new character emerge this season, Javier Elizonndro (Alfonso Herrera), nephew of Omar and the to-be successor of the Navarro cartel. Though charming, Javier is slightly off the deep-end, but only just enough for viewers to pick up on. In my personal opinion, he’s the true villain “Ozark” viewers deserve.

Practically foaming at the mouth to take over the cartel, Javier immediately takes a disliking to the Byrdes. Though the Byrde family’s actions aren’t great, as the main character’s, viewers undoubtedly root for them to make it out – maybe besides Wendy – so Javier’s antagonistic antics in the first half of the season keep the show interesting.

It’s almost comical how every time things seem to be going somewhat smoothly for the Byrdes, Javier comes in and messes it up. His aggressive nature leads him to be chaotic, and almost gets them caught as well as messes up deals and smooth situations several times.

Returning character Ruth Langmore (Julia Garner) shines in this season, and has quickly gone from annoying antagonist in the first season to the most beloved character in the show. Besides Marty, I would argue that Ruth is the character audiences are rooting for the most.

As Ruth goes through heartache after heartache, we just want to see her win. Throughout the show, she loses her dad, other family members, and not to mention, her boyfriend Ben, Wendy’s brother.

Though previously very close to Marty and the Byrdes in general, Ben’s death caused her to sever all ties with them, going into her own operations alone. Ruth goes through an even more gut-wrenching event at the end of part one of season four, leaving viewers on the edge of their seats wondering what the second part has in store for us.

This moment is Ruth’s breaking point, and when the events that play out in the final episode of part one occur, she goes on a mission to make things right. After counting out her initial prime suspect, she goes to the Byrdes for answers. When Jonah admits to her what she wants to know, much to Wendy and Marty’s dismay, though they plead for her to not go look into this in fear of her being killed, shotgun in hand she declares, “If you wanna stop me, you’re gonna have to f***ing kill me.” As the final episode comes to a close, we see an emotional Ruth frantically driving off, which was one hell of a cliffhanger.

Overall, though I wasn’t sure how good it would be when I tuned into episode one, I quickly became obsessed with the first part of season four until the very end. “Ozark” as a whole is the definition of binge-worthy, and the start of the final season is no different.

I will be impatiently awaiting the second part’s release, eager to see all the dominoes the show has set up fall. Though the chances may be slim, I’m genuinely curious to see if the Byrdes will have a somewhat happy ending or if it’ll end in misery for them.