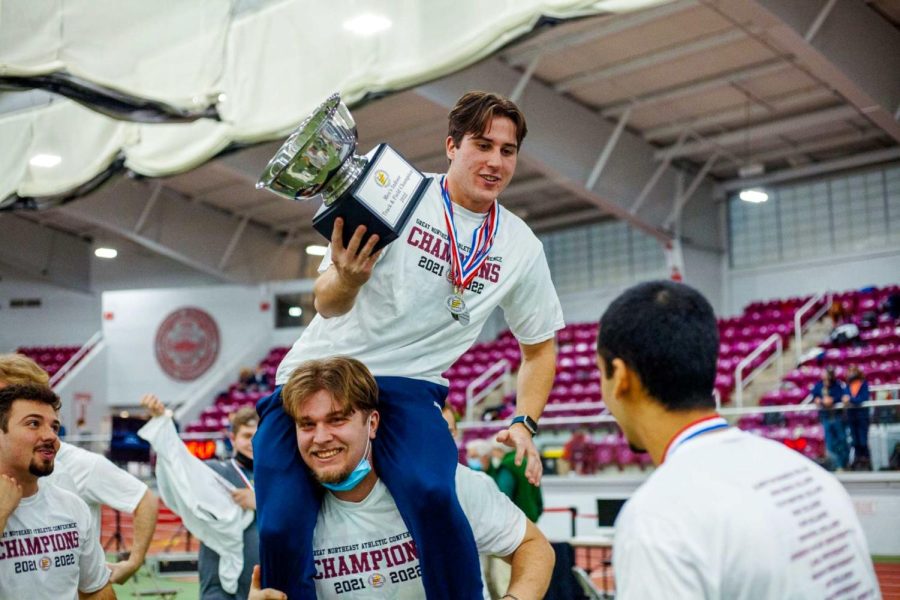 Michael Power holds teammate Robert Solari on his shoulders with the GNAC Championship trophy in hand.

Both teams dominated Sunday’s championships as the Rams won 11 of the 16 events.

“I couldn’t have asked for anything more from them,” head coach Will Feldman said. “I’m extremely proud of everything they were able to do.”

Suffolk athletes set 31 personal bests in the meet, with the Rams often leading the pack in most of their events on the track, as well as the field events, at the Boston University Track and Tennis Center.

The men’s indoor GNAC championship is the second straight for the Rams’, who’s men’s team’s total of 234 points was 142 points more than runner-up Colby Sawyer College. The women won the event with a 162 point effort to dethrone defending champs Emmanuel College to win their first GNAC indoor championship in team history.

“It’s a really resilient bunch of kids,” Feldman said. “They were all recruited with the idea that we’re going to win multiple championships. They’re united in the goal.”

The Rams’ distance runners dominated the event. Senior men’s distance runner Matyas Csiki-Fejer added to his illustrious resume for the Rams’, dominating his three events at the GNAC. Csiki-Fejer won the mile race with ease with a 4:24 effort, with Nic Malm securing third in the event with a time of 4:42. Csiki-Fejer lifted the Rams’ distance medley squad with a performance in the anchor spot for a team total of 11:16. The women’s distance medley team finished second in their race with a 14:25 time.

“It’s nice to come back,” Csiki-Fejer said. “Before the race we talked about how there’s a lot of momentum coming into this race. Both teams were the number one seed.”

Csiki-Fejer was also the champion in the 3000m race with a time of 8:59, which featured an all Suffolk podium with runners Tim Barry and Thomas Novy following Suffolk’s star with 9:19 and 9:25 performances respectively. Skyler Spanbauer medaled for the women in the 3000m, with an 11:34 time in the event.

Barry and Novy of the men also won first and second in the 5000m with two sub-16 minute efforts. Novy said that the Suffolk fan base helped fuel him and his teammates to do better.

“After not having an indoor season last year it was really nice having a community again,” Novy said.

In the shorter and mid distances, the men’s and women’s teams were again podium regulars.

With a 1:04 time, Jocelyn Trisciak of the women’s team came in second in the 400m, while Cole Bolduc and Robert Solari securded first and second place in the men’s 400m with times of 50.78 and 51.40. Amanda Walden of the women’s team and Solari both narrowly lost the 200m, settling for a second place finish with a time of 26.47 and 23.26 in their races.

“Short races are tough because I’m not the best at starts,” Walden said. “Something came over me today. The energy with Suffolk in general today has been so different than it has the whole entire season. Everyone is PRing. I’m so proud of everyone. It feels great”

The women’s hurdles team swept the podium with Catherine Madden, Klaudia Rushi and Julia Hunt finishing taking the podium as the top three.

“I said from the beginning in practice we’re going to sweep,” Madden said. “Then we got it, it was crazy.”

In field events, the Rams’ were also successful with Grace Danehy of the women’s team capturing the first ever women’s high jump win for the Rams’ in the championship meet. Suffolk’s Robert Solari and Eduardo Silva finished second and third in the high jump.

In the throwing and shot put events, the women’s Allison Rodriges took first, while Edward McCarthy took second in the men’s in his first GNAC Championship appearance.

“It feels pretty good,” McCarthy said. “I need to build off that and bring it into the spring season.”

Caitlyn Filloramo and Leah Doucot took first and third in the women’s weight throw while the men swept the podium with the efforts of Michael Balestra, Mathew Smith and Frank Irizzary meddling.

The Rams’ double victories for the men’s and women’s came on the heels of the women’s cross country team winning the Commonwealth Coast Conference championship in the fall.

The two teams will compete again in NCAA Division III Regionals in Middlebury, Vt. on Feb. 25.