Suffolk men’s basketball on a roll in first full season in CCC, sit at 6th in the conference 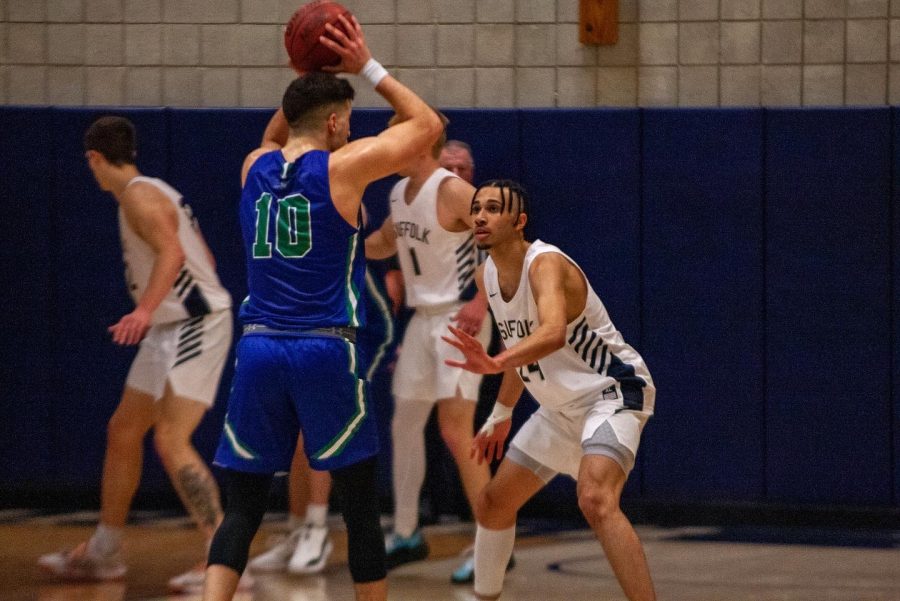 The Suffolk Men’s basketball team has had a hot season so far.

The men are playing their first full season since their 2018-19 season when the team went 18-8 and lost in the quarterfinals of the Great Northeast Athletic Conference playoffs.

The 12-7 Rams had a strong first half of the season, their first full season in the Commonwealth Coast Conference.

However, since the pause in play over the winter break, the Rams have fallen flat in recent weeks, losing a few close games.

The Rams are 4-6 since the return to play, with many of the losses coming in close games that were toss ups down the stretch.

“I think we got off to a great start in the first semester,” Rams point guard Aidan Sullivan said. “We’ve kind of hit a rough patch offensively.”

The Rams’ most recent loss in the stretch was to Salve Regina University at home on Saturday, when the Rams played their first game of the 2022 season with full capacity attendance.

“It was a great crowd,” Sullivan said. “It’s always great to play in front of fans…it makes a big difference with the energy and effort level.”

The game was a hard-fought matchup for Suffolk, who was looking to defeat Salve after losing a close 65-64 contest to the Seahawks in January.

The Rams lost forward Keenan Robertson to a leg injury for much of the first half after an early tie-up on a fastbreak sent Robertson to the floor in agony.

“I hyperextended my knee,” Robertson said. “Our trainer Rick just wanted to make sure I didn’t do anything serious.”

The Rams would come back after falling behind early in the game. The Rams used contributions from big men Nate Hale and William Rowe to lead the Rams’ comeback.

“I’ve played a lot of basketball with Nate [Hale],” Rowe said. “He’s one of the best players I’ve ever played with and one of my best friends. We have a pretty good connection and it translates on the court. We have a lot of trust in one another.”

However, despite the hard-fought matchup, the Rams would lose pace with Salve late in the game.

“We’ve played a lot of close games recently,” Rowe said. Rowe said that the Rams have struggled to get their offense going early in games, which can leave them at a disadvantage in their recent close contests.

Aidan Sullivan also thinks a lot of the problems for the Rams have been against teams the Rams play for a second and third time.

The Rams played the University of New England Tuesday and fell by a final score of 89-80 after a second half surge by the Nor’easters.